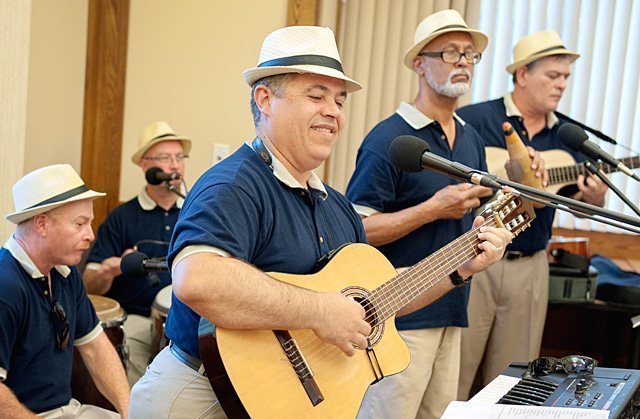 Lynette Saenz, director of the institute for the diocese’s Parish & Clergy Services, coordinated the celebration. The event included tapas and music from A Son Tropican, a group of local musicians that play traditional Puerto Rican music.

Many of the attendees sang along, including keynote speaker, Doris Valentin, director of migrant ministry for the Diocese of Buffalo. A native of Puerto Rico, Valentin even requested "Mi Viejo San Juan" before taking the podium at St. Bernard’s School of Theology and Ministry, where the institute is based.

Valentin also was the former director of the Northeast Hispanic Catholic Center in New York City, which closed and led to her move to Buffalo, she said.

She offered a historical overview of Hispanic ministry on a national level that began in the 1970s with a series of encuentros (encounters) that have taken place since then and have produced direction and focus for dioceses around the country.

"The diocese … wanted to make sure we met the needs in the Hispanic community," Saenz said of the institute’s founding.

And since its opening, about 200 people have taken the Spanish-language classes and certifications offered, Saenz noted. Current certificate courses of study are: Catechism of the Church, Pastoral Ministries and Fundamentals of the Faith.

The programming at the institute was revamped last year, Saenz added, when it began offering a certificate program for designated ministries and an advanced certification program for lay leaders as well as continuing-education courses.

Elizabeth Johnston, intercultural program specialist for Parish & Clergy Services’ Office of Cultural Diversity, said that the programming has evolved since she graduated from the institute in 1995. She also has become an instructor for the catechism courses and plans to promote the school’s offering at more parishes to boost registration, she added.

"The restructuring we’ve gone through in the last three years has marked an important change within the Instituto itself," Johnston said, including a greater emphasis on theology.

The institute is currently planning more changes and plans to offer a six-week course in the summer, Saenz announced during the Sept. 23 event.

Sister of St. Joseph Patricia Schoelles, outgoing president St. Bernard’s, said that she is grateful for the leadership Saenz has provided in recent years. And she is proud of how the institute has evolved during her 21-year tenure, at St. Bernard’s, Sister Schoelles added. Father George Heyman, who was among the more than 50 attendees at the 25th-anniversary event, will take the helm of St. Bernard’s in January.

Last year, Buffalo parishioners also took courses at the institute and the Buffalo Diocese has created a spin-off program at Christ the King Seminary in Buffalo, Sister Schoelles said.

"It’s a wonderful program of outreach to our Spanish population," she said of the institute. "Because whatever statistics you look at, the future of the Catholic Church is majority Spanish."

Wanda Medina of Rochester said that she began classes to develop her own knowledge of the faith so she can speak intelligently about Catholicism to her family and to others.

The native of Yabucoa, Puerto Rico, is enrolled in the Catechism certification course but has taken classes outside of that program depending on the availability of classes, she explained.

"In our community, people are very faithful about going to church and being involved in the community and involved in ministry," said Medina, a parishioner of St. Francis Xavier Cabrini at St. Michael Church in Rochester. "But not everybody is educated about the roots of the faith. I really need to know the roots of our faith to be able to talk about it and follow it."

Medina’s attitude offers an example of the importance of Hispanic ministry, according to Valentin.

"You’re giving a population that is faithful to our church, who want to help with the evangelization process, a way to go out there and work — even if they’re not getting paid for it — because they believe in Jesus Christ so profoundly," Valentin said.