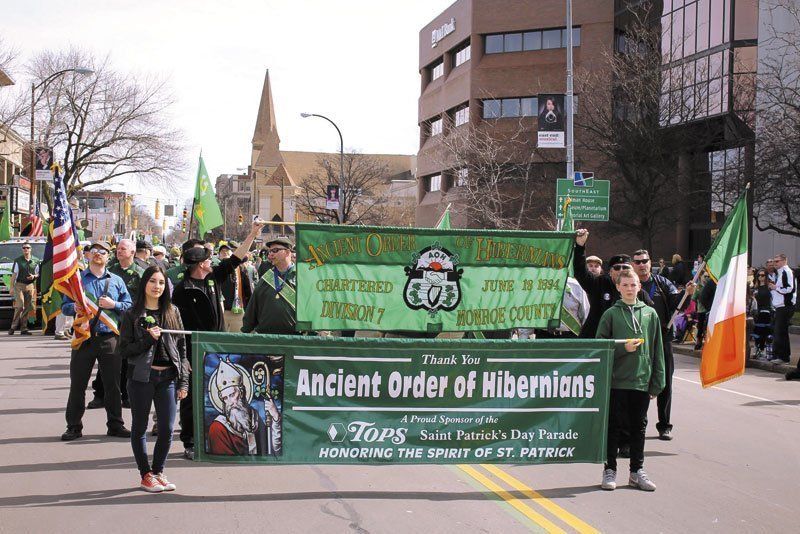 From late 19th-century groups for transplanted European Catholics, to more recent efforts on such priorities as ecumenism and family life, a wealth of movements — many still in place today — have helped the laity play a significant role in the Rochester Diocese’s 150-year history.

According to The Diocese of Rochester in America 1868-1993 by Father Robert F. McNamara, key lay initiatives have taken place in every era of the diocese, reflecting trends in the church and in the secular world. Here are some of the more noteworthy developments during the diocese’s history:

Among the first groups to take root locally in the newly founded Diocese of Rochester were the Knights of Columbus and Knights of St. John, two large and well-known fraternal organizations that remain highly active here to this day.

Immigrant Irish, German, Italian and Polish populations from Europe flourished during these years, as noted by the emergence of such group as the Ancient Order of Hibernians (Irish), Catholic Center Verein (German) and Polish National Alliance.

In the early 1900s, the Holy Name Society — formed to promote reverence to the sacraments among lay men — was established in this diocese, as were the Apostleship of Prayer and Laymen’s Retreat League. Other groups rising to local prominence were the American Federation of Catholic Societies, uniting all American lay Catholic organizations; the Militia of Christ, which stressed Catholic principles in the national labor movement; the Catholic Daughters of America, a women’s group promoting religious and social welfare; and the St. Vincent de Paul Society, a volunteer coalition dedicated to charitable works. Also of note was the establishment in 1912 of the Catholic Charity Guild, forerunner of today’s diocesan Catholic Charities.

The Catholic Women’s Club, formed in 1919, was known for its charitable and social-welfare efforts. Soon after World War I ended, Catholic Scouting began a long and proud history in the Rochester Diocese.

The late 1920s and early 1930s saw the foundation of several lay organizations, including: the Nocturnal Adoration Society, promoting Eucharistic devotion; Catholic Action, encouraging greater lay participation; the St. Luke’s Guild for physicians; the Rochester Council of Catholic Men and Diocesan Council of Catholic Women; the Catholic Worker movement; and the Legion of Mary.
In 1932 Bishop John F. O’Hern conferred on several laymen — mostly businessmen or executives — the distinction of Equestrian Order of the Holy Sepulchre of Jerusalem. The international order — the only lay institution of the Vatican State charged with providing for the needs of the Latin Patriarchate of Jerusalem and activities to support the Christian presence in the Holy Land — still has local members today. Also in the 1930s, the St. Peter Claver Society for African-American Catholics was established as were the St. Gerard Maternity Guild and Rochester Catholic Sodality Union, a spiritual organization.

The 1940s through 1960s were marked by the founding of the Catholic War Veterans and the Family Rosary for Peace, as well as the Catholic Family Movement, Cana Movement, Mothers’ Circles, Widowed Parents organization, Serra International Eucharistic Legion, Daily Mass League and Catholic Interracial Council of Rochester. Missionary activity was sparked by the Second Vatican Council, as was the first diocesan ecumenical commission formed in 1965.

In the late 1960s, the Rochester Cursillo Movement was founded, and Bishop Fulton J. Sheen opened graduate theology programs to lay Catholics — including women — at St. Bernard’s Seminary, establishing a model that is carried on today by St. Bernard’s School of Theology and Ministry.

Many of these lay movements have continued on in the diocese over the past 50 years, and new ones have flourished as well.

The 1970s saw the formation of Genesee Ecumenical Ministries (now the Greater Rochester Community of Churches) and establishment of Catholic charismatic groups and the Office of Family Life. Since that time, the Diocese of Rochester has seen a growing lay emphasis in pro-life causes subsequent to the 1973 U.S. Supreme Court decision in Roe v. Wade, and on youth ministry, with the formation of numerous parish youth groups and participation in diocesan and national/international youth events.

Others areas of strong lay participation in the past half-century have included prayer communities and retreat centers, devotional/adoration groups, lay contemplative groups and Third Order associations, Engaged Encounter, Worldwide Marriage Encounter, Retrouvaille (for troubled marriages), Magnificat (a ministry to Catholic women) and Project Rachel (for those affected by abortion).