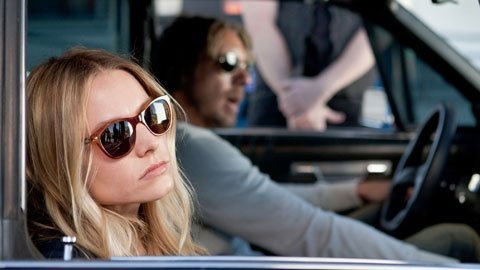 Dax Shepard, who wrote the screenplay and co-directed with David Palmer, plays Yul Perkins, a sensitive former getaway car driver for a group of bank robbers who is now in the witness protection program. He decided to change his name to Charlie Bronson because he thought it sounded macho.

Kristen Bell is his girlfriend Annie, a brainy type with a doctorate in conflict resolution who has been offered a college teaching job in Los Angeles. The catch? She has to get there in two days. Her only shot is for Charlie to drive her the 500 miles from Milton, Calif., to La-La Land, in his souped-up Lincoln Continental.

Along the way, they’re pursued by Annie’s possessive ex-boyfriend, Gil (Michael Rosenbaum), Gil’s brother Terry (Jess Rowland), a lovelorn gay sheriff’s deputy, and bumbling federal marshal Randy (Tom Arnold), who is befuddled both by driving and by firearms. Also finding their way into the chase are the thieves (led by Bradley Cooper) with whom Charlie used to work. They want Charlie to lead them to the loot he has buried on his father’s property.

When a hillbilly mechanic steals the Lincoln’s engine, Charlie is forced to purloin other forms of high-powered transport and, as a result, must confess his past to Annie.

If one detects the Burt Reynolds good ol’ boys oeuvre in this, that’s probably not the intent. Everyone is far too foul-mouthed to be likable, and there’s a high gross-out factor as well. Mercifully, at least the speeding vehicles don’t talk.