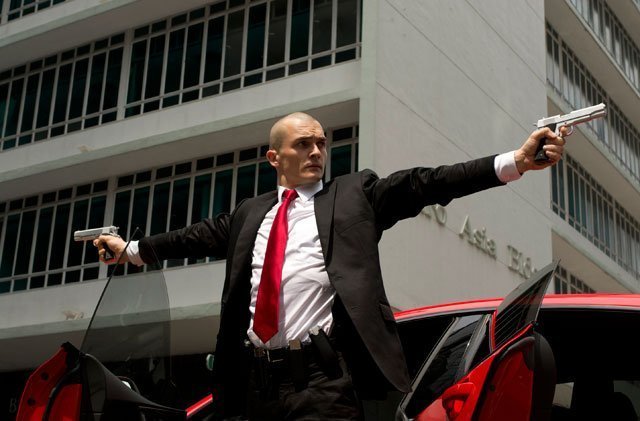 Rupert Friend stars in a scene from the movie "Hitman: Agent 47." The Catholic News Service classification is O -- morally offensive. The Motion Picture Association of America rating is R -- restricted. Under 17 requires accompanying parent or adult guardian.
By John Mulderig
Catholic News Service
NEW YORK (CNS) — Some things, as we know, improve with the passage of time. Alas, film adaptations of the video game series "Hitman" do not seem to be a case in point.
In 2007, director Xavier Gens’ eponymous big-screen addition to the franchise showcased gory, limb-grinding violence and considerable nudity. While novice helmer Aleksander Bach’s redo, "Hitman: Agent 47" (Fox), tones down the sexuality, the level of mayhem remains much the same.
Eight years ago, we steered readers away from the initial version. Our current advice: Rebuff the reboot.
One of the first defects to become apparent, on a purely cinematic level, is the picture’s overly explicated, yet under-accounted-for plot. Perhaps the best way to approach this partly burned, partly runny omelet is to observe that virtually everyone of any significance in the cast is hunting for the same person: to wit, a fugitive biologist called Litvenko (Ciaran Hinds).
Litvenko’s estranged daughter, Katia (Hannah Ware), wants to reconnect with her missing dad for personal reasons. The otherwise unnamed purebred assassin of the title (Rupert Friend), whose genetic engineering was supervised by Litvenko, has a contract to fulfill — and, apparently, no feelings to spare for anyone he might harm while completing it.
Then there’s obviously-not-my-real-name John Smith (Zachary Quinto). Though he starts off by posing as Katia’s self-appointed protector, Smith has reasons of his own for tracking the solitary girl and, through her, Litvenko.
Working away in the shadows, meanwhile, is a reclusive underworld kingpin named Le Clerq (Thomas Kretschmann) who would also like to get his hands on Litvenko.
Some of the dialogue in Skip Woods and Michael Finch’s script feebly defends free will in the face of the immoral manipulation to which Agent 47 and others of his ilk have been subjected. "We determine who we are by what we do," Katia insists as she works to counter 47’s fatalism.
But philosophy is hardly the point. Eliminating extras is the real agenda, and the means of death range from the familiar, viz., bullets and car crashes, to the gruesomely exotic. Falling squarely into the latter category are the conveniently placed airplane engines that are made to double, courtesy of the special effects department, as human meat grinders.
The film contains pervasive nasty violence with excessive gore, brief partial nudity, a couple of profanities and about a half-dozen uses each of rough and crude language. The Catholic News Service classification is O — morally offensive. The Motion Picture Association of America rating is R — restricted. Under 17 requires accompanying parent or adult guardian.
– – –
Mulderig is on the staff of Catholic News Service.
Copyright © 2022 Catholic News Service, Inc. All rights reserved. Linking is encouraged, but republishing or redistributing, including by framing or similar means, without the publisher's prior written permission is prohibited.