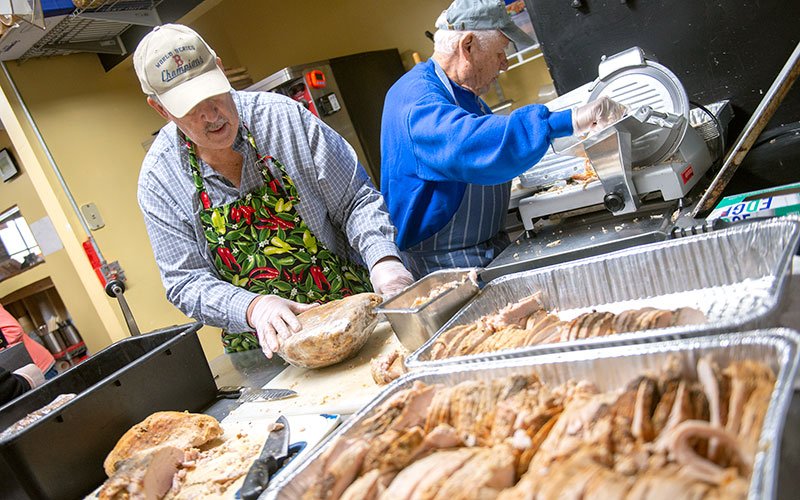 It isn’t quite time to bring back their annual Christmas and Thanksgiving gatherings. Yet ministries around the Diocese of Rochester are still finding ways to provide folks in need with free holiday meals, despite the ongoing threat of COVID-19.

St. Peter’s Kitchen in Rochester, for instance, is gearing up for a takeout Christmas ham dinner Dec. 24 after having organized a to-go turkey dinner on Thanksgiving Day. According the Patricia Lorenzen, kitchen director, St. Peter’s has traditionally offered those meals as sit-down celebrations right on the holidays. However, due to the pandemic, this marks the second consecutive year that takeout dinners are instead being distributed at the kitchen’s entrance.

Also providing both Christmas and Thanksgiving takeout meals for the second straight year is Elmira Community Kitchen, which, like St. Peter’s Kitchen, has routinely featured sit-down meals on those holidays in past years. Kathy Dubel, director, noted that the kitchen will offer a special lunch to go on Dec. 23, featuring hot roast beef with gravy. The kitchen also provided a turkey dinner on Nov. 24, the day before Thanksgiving.

Other recent efforts around the diocese to provide holiday meals at no cost included St. Catherine of Siena Parish in Ithaca, where Thanksgiving dinners were made available for takeout Nov. 24; and St. Luke the Evangelist Parish in Livingston County, which joined an ecumenical effort to provide Thanksgiving meals for the area’s needy and shut-ins.

Meanwhile, the St. Mary/St. Matthew cluster in Honeoye and Livonia offered its annual free Thanksgiving turkey dinner via a drive-up arrangement at St. Mary Church. Meals were prepared in advance by volunteers at Honeoye’s Mill Creek Cafe in and then distributed in microwaveable containers Nov. 21 at St. Mary, with deliveries for the homebound being made as well.

Diane O’Connor, who cochaired the Thanksgiving effort in Honeoye along with Judy Donsky, said that St. Mary/St. Matthew began the dinners in 2016 as a sit-down event at St. Mary with the aid of many volunteers and community donations, serving hundreds each year. O’Connor said the pandemic prevented parish participation in 2020, but that Adam Frick — owner of Mill Creek Cafe and a St. Mary parishioner — arranged a takeout and delivery effort through his restaurant before St. Mary/St. Matthew became involved again this past Thanksgiving.

O’Connor noted the importance of receiving a Thanksgiving dinner for many, saying, “We have an older community, and a lot of folks don’t have family in the area, and they might struggle to be able to get a meal together.” Among the past recipients, she said, were a homebound man and his elderly mother who “weren’t able to prepare a meal, let alone go out and buy one,” and a young couple who hadn’t eaten in a couple of days.

At St. Peter’s Kitchen, Lorenzen said that families and individuals appreciate not only the holiday meals, but also the “extras” that are included with them, such as gift bags and fresh produce. She added that St. Peter’s will again conduct its Children’s Toy Store shortly before Christmas, noting that the kitchen provided 222 gifts for youngsters last year along with 160 Christmas meals and 150 Thanksgiving meals.

Lorenzen said the kitchen has been offering takeout each weekday since the pandemic began, providing lunches that are boxed ahead of time and often include enough extra food to last into dinnertime. She said she hopes St. Peter’s can return to serving meals indoors — at holiday time and otherwise — sometime in early 2022 as more people receive COVID-19 vaccinations. But for right now, she said, “Sitting and eating at a table with others you do not know could be a health hazard.”

In Elmira, Dubel noted that the community kitchen continues to offer to-go lunch meals Monday through Friday as well, as it has done throughout the pandemic.

Lorenzen added that while feeding the hungry is an obvious priority for St. Peter’s Kitchen, she also looks forward to when patrons can once again enjoy the social benefits of congregating for meals.

“The feeling of belonging someplace is the real draw,” she remarked.