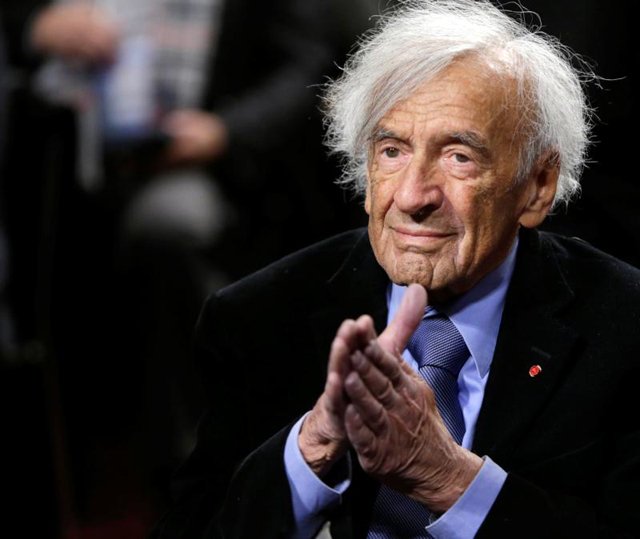 Nobel Laureate Elie Wiesel, a Holocaust survivor and author who fought for peace, human rights and simple human decency, died July 2 at his New York home at age 87. He is pictured in a 2015 photo.
By Catholic News Service
NEW YORK (CNS) — Elie Wiesel, a Holocaust survivor, Nobel Peace Prize recipient and prolific author who died July 2 at age 87 in his New York home, has been remembered in tributes from around the world for standing up for human dignity and for being a witness to the world of the atrocities of the Holocaust.
When Pope Francis received the Charlemagne Prize May 6 for promoting European unity, he quoted Wiesel urging Europeans to undergo a "memory transfusion," to remember their fractured past when confronting issues that threaten again to divide it.
In its July 4 edition, L’Osservatore Romano, the Vatican newspaper, said Wiesel’s legacy was his "appeal for collective responsibility in the face of horror and his call to unite the abilities of each person in pursuit of what is good."
That sentiment has been echoed by many.
President Barack Obama described Wiesel as "one of the great moral voices of our time, and in many ways, the conscience of the world."
And Vice President Joe Biden said Wiesel taught him "to understand the incomparable resilience of the human spirit — our capacity to overcome virtually anything."
He said his friend Wiesel "had seen the depths of the darkness that we are capable of inflicting on one another" and his belief in the "the fundamental goodness of humanity," despite this knowledge, was all the more inspiring.
When Wiesel was awarded the Nobel Peace Prize in 1986, the citation said he was a "messenger to mankind," whose "message is one of peace, atonement and human dignity. His belief that the forces fighting evil in the world can be victorious is a hard-won belief."
He accepted the award with a stern call that all who witness suffering and humiliation must take sides. "Neutrality helps the oppressor, never the victim. Silence encourages the tormentor, never the tormented," he said.
Wiesel is most known for "Night," his autobiographical account of the horrors he witnessed in concentration camps as a teenager. It was published in 1960.
When he was 15, the Nazis sent him and his family to Auschwitz. His mother and his younger sister perished there. His two older sisters survived. He and his father were later transported to Buchenwald, where his father died.
"Never shall I forget that night, the first night in camp, which has turned my life into one long night, seven times cursed and seven times sealed," Wiesel wrote. The small volume, just over 100 pages, was initially something publishers were not sure would sell and is now required reading for many U.S. students.
The Catholic French author Francois Mauriac encouraged Wiesel to write the book, breaking his silence about his experience. The work not only is an account of what happened but a reflection on faith and God’s presence amid unspeakable horrors.
Wiesel was born Sept. 30, 1928, in Sighet, a small village in Romania. In 1963 he became a U.S. citizen, and six years later he married Marion Rose, a fellow Holocaust survivor who translated some of his books into English. The couple had one son, Shlomo.
In 1978, he was chosen by President Jimmy Carter to head the President’s Commission on the Holocaust to plan an American memorial museum to Holocaust victims. In 1993, the U.S. Holocaust Memorial Museum in Washington opened with Wiesel’s words carved in stone at its entrance: "For the dead and the living, we must bear witness."
Wiesel was not only involved with the museum and with writing but he also taught college courses at Yale University, Boston University and the City University of New York.
Copyright © 2022 Catholic News Service, Inc. All rights reserved. Linking is encouraged, but republishing or redistributing, including by framing or similar means, without the publisher's prior written permission is prohibited.