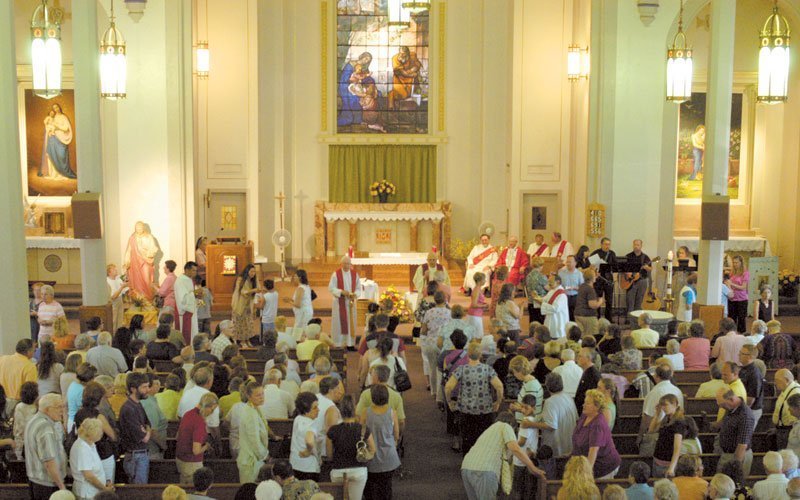 ROCHESTER — While waiting for the final Mass to start at Holy Family Church, Inez Wells of Rochester recalled the sacraments her family had celebrated there during her 82 years as a parishioner.

She said her father was baptized in the nearly 144-year-old church during the 1880s and attended classes in German at Holy Family School. She received all her sacraments at the church. Her daughters were baptized and married there, and they also attended Holy Family School, which closed June 20.

“This is a real heartbreaker,” Wells said.

Broken hearts and tolling church bells moved some to tears during Holy Family’s June 29 closing Mass, which was followed by a coffee hour and reception in the gym and auditorium at Holy Family School. The church had been part of City West Catholic Community and is being merged with the community’s other church, Holy Apostles on Lyell Avenue.

More than 700 worshipers from Holy Family, Holy Apostles and other churches attended the final 10 a.m. Mass, filling all the pews and standing area at the back of the church. Several people said the rosary outside the church during the Mass in protest of the closure.

Father Paul Tomasso, pastor of City West Catholic Community, noted that some parishioners who had been attending faithfully each week could not bring themselves to participate in the final Mass. He asked for the church’s prayers for these parishioners, who he said had worked hard on behalf of Holy Family Parish.

Parish officials have said the decision to close Holy Family was based on a study conducted by City West Catholic Community’s Futures Task Force. The task force determined that attendance and finances of the parish were too small for Holy Family’s large complex, so it recommended in January 2008 that the two parishes consolidate at Holy Apostles.

In a June 27 interview, Rick Paris, chairperson of City West Catholic Community’s joint parish council, noted that fuel costs and insurance rates have gone up astronomically, straining the finances of both Holy Family and Holy Apostles.

Yet parishioners had held out hope they might be able to keep Holy Family open, said Paris, who noted that a fundraiser last year had raised more than $35,000 for the parish. However, rising costs coupled with the church’s slowly declining population ultimately kept them from saving the church, he said.

Though parish officials have cited attendance and finances as the main causes of Holy Family’s closure, the merger of the two parishes coincides with a reduction to one priest to serve both churches. Father Peter Deckman, parochial vicar at Holy Apostles and Holy Family, retired in June and will not be replaced. Father Tomasso will continue as pastor of the merged parish until Dec. 30, when Father Tony Mugavero will return from sabbatical and become pastor. At that time, Father Tomasso will assume the pastorate of Our Lady of Peace Parish in Geneva.

Due to the loss of a priest, City West Catholic Community has cut back from six weekend Masses to three Masses at Holy Apostles by eliminating three English-language Masses. Beginning July 5, confessions will be heard from 3 to 3:40 p.m. on Saturdays with the vigil Mass at 4 p.m. in English. The Sunday English Mass will be celebrated at 9:30 a.m. and will be preceded by the rosary for peace at 9 a.m. The Sunday Spanish Mass will be celebrated at 11:30 a.m.

Mass times may change in September when a new religious-education schedule is prepared.

Paris said the possibility of a name change for the consolidated parish is under consideration and that a team may be appointed to guide the transition to Holy Apostles.

No decisions have been made about Holy Family’s furnishings, but the church has received written inquiries for its artifacts, Father Tomasso said during the Mass. A Native American ministry has expressed interest in such items as the statue of Blessed Kateri Tekakwitha, a Catholic Native American who was declared blessed by Pope John Paul II June 22, 1980. Other inquiries have been made about the church’s St. Theresa statue, its Pieta, 1914 Wangerin-Weickhardt pipe organ, 1902 European-made Stations of the Cross and 1903 stained-glass windows.

“It’s our intention to place as many artifacts as possible in public worship spots,” Father Tomasso said.

Decisions also have not been made about the future occupants of the church, school or convent, where several Sisters of St. Joseph still live, Paris said.

“We are looking at possibly leasing the school or selling the whole complex,” he said.

Despite the loss of physical presence at Ames and Jay streets, Father Tomasso told attendees at Mass that City West Catholic Community parishioners planned to reach out to the area around the church.

“This neighborhood will continue to be supported,” he stated.

Father Tomasso noted that the parish’s German-immigrant founders served as examples of how to weather trials and continue on in the face of displacement.

“They knew their fundamental vocation was to carry Jesus Christ with them wherever they went,” he said.

During the final Mass, Father Tomasso recognized all those who were baptized, married, received first Communion or confirmed in the church, were alumni of Holy Family school, and those who were visiting from other dioceses. The priest also gave thanks for all former employees and graduates of Holy Family School.

“We know this has been a very difficult week also for Holy Family School,” he remarked.

School Sister of Notre Dame Lorraine Burns, who runs Notre Dame Learning Center and formerly was principal of Holy Family School, said she is sad to see the parish and school close. She said some of her favorite memories were of the liturgies school children of all religions celebrated in the church. She said she hopes that parishioners will be able to maintain their outreach to the city.

“I just hope and pray that the church is going to do something for the people of Rochester,” Sister Burns said. “We cannot forget the poor.”

Thelma Scheib of Gates said Holy Family will always have special meaning to her. Her parents were married there, as were her brothers, a sister and four of her seven children. She learned to bowl in the parish recreation center, which has lanes dating to 1932.

“There’s a hole in my heart that is never going to go away,” Scheib said.

She said one of her favorite things about the church is its decor, including its painted, gold-leafed ceiling, stained-glass windows and statues.

“I’ve been to churches in Europe, and this is just as beautiful, if not more so, because it has got more meaning to me,” Scheib said.

She said she doesn’t know where she’ll worship next, because until recently, she hadn’t given up hope that the church would stay open.

“I kept thinking we were going to get a miracle,” she said.

Over the years, the parish welcomed many waves of immigrants in addition to its German founders, Scheib said. A 1964 parish history notes that Italians, Ukrainians, Polish and Puerto Ricans successively became parishioners. Due to the need for loans for immigrants of limited means, in 1937 Holy Family started the city’s first parish credit union, which merged with St. Pius X Federal Credit Union in December 2006.