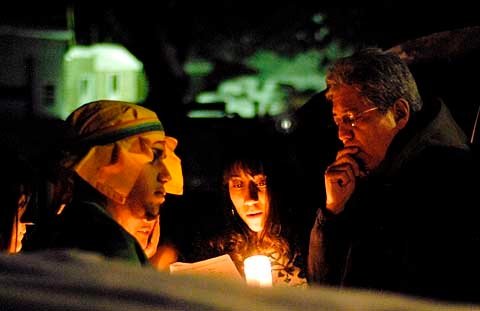 MARION — The group huddled together Dec, 17 as they walked toward the small country church in the cold winter evening singing "O Come All Ye Faithful."

Led by Mary, Joseph, shepherds and angels in a traditional "posadas" representing the journey of the Holy Family to seek shelter in Bethlehem, the parishioners from Our Lady of Guadalupe Mission of St. Gregory’s asked for entry to the church in song.

"My wife is Mary; she is queen of heaven and she’s going to be the mother of the Divine Word," the group outside sang.

"Are you Joseph?" the parishioners inside the church said in reply. "Your wife is Mary? Enter pilgrims. I did not recognize you."

Once they entered, the more than 60 people who took part in the celebration recited the rosary together. Members of St. Maximilian Kolbe Parish in Wayne County, the diocese’s Hispanic migrant ministers from Wayne County, Guadalupe parishioners and other community members organized the event for the second year in a row.

"We have this simple celebration of Las Posadas," said Father Jesús Flores, the diocese’s coordinator of Hispanic migrant ministry. "We celebrate this human feeling of taking in and welcoming others."

The children and teenagers who played the characters in the Bethlehem scene said it was good for families to share this tradition with their young children and other non-Hispanic parishioners.

"I really like it," said Isabel Miranda, a 12-year-old who attends Sodus Middle School. "It gets the whole community involved."

"If we did one year here (in Marion) and one year there (in Ontario), it would be nice," Jim May said.

After the rosary, everyone shared in the food and sat at long tables in fellowship. Traditionally, a piñata would be brought out for the children but the ceiling was too low for such activity, Jim May noted.

Instead, he and his wife prepared bags of candy — known as "aguinaldos" — that were distributed to all the children. After playing "Feliz Navidad" with other musicians from the Guadalupe church, Peter Mares explained that the candies represent the gift of God’s grace.

"Come get your grace of God," said Mares, director of La Casa in Sodus, a home that offers immigrants a temporary place to stay.

The celebration was a meaningful gift to the families as well as they take on the important task of passing on their culture and values to their children in their new country, said Hormis Bedolla, who has lived in Wayne County for the past seven years.