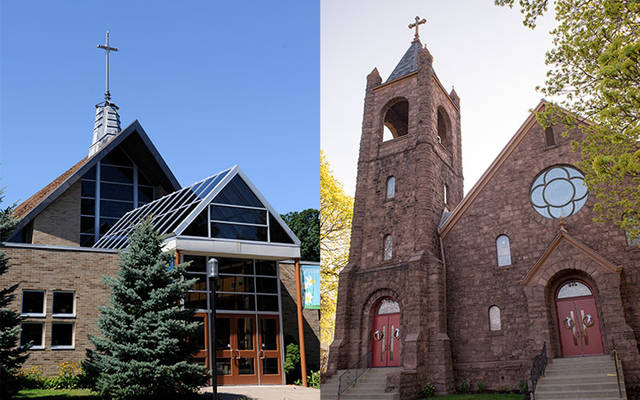 St. Helen Church (left) and Holy Ghost Church in the Town of Gates have been recommended to close in June 2020. (File photos)

GATES — Parish of the Holy Family is recommending to Bishop Salvatore R. Matano that two of its three worship sites be closed in June 2020.

The proposed closings of Holy Ghost and St. Helen churches were announced by Father Michael Schramel, pastor of Parish of the Holy Family, in a Dec. 29, 2019, bulletin article. If Bishop Matano accepts the recommendation — which was finalized during a Dec. 8, 2019, meeting of the parish’s finance and parish councils — Holy Ghost and St. Helen would be put up for sale, and the parish’s only remaining worship site would be St. Jude the Apostle Church, also in Gates.

Father Schramel told the Catholic Courier Jan. 25 that the recommendation to close Holy Ghost and St. Helen resulted from a series of meetings beginning in September 2019 among the finance and parish councils as well as officials from the Diocese of Rochester. He explained that the proposal was prompted by such factors as declining attendance, unused and underused buildings, and an aging community in Gates.

According to Father Schramel, the parish is now preparing to formally petition Bishop Matano for relegation — a decree, noted in No. 1222 of the Code of Canon Law, by which a bishop declares that a Catholic church is no longer to be used for worship. Should the decree be granted, Holy Ghost and St. Helen would close June 30, 2020, at the end of the current fiscal year.

Father Schramel said that although the recommended closings have not yet been approved, Parish of the Holy Family is already preparing for that likelihood. Among those preparations are deciding where to relocate sacred items from St. Helen and Holy Ghost, and developing a new Mass schedule to take effect July 4-5, 2020.

Father Schramel noted that parish leadership has sought to be as transparent as possible about the process leading to the recent recommendation. Parishioners, while naturally regretful, have “just been very supportive of the tough decisions we’ve made,” he said.

“One comment that stood out to me was, ‘I totally understand why we have to do this, but it doesn’t mean I’m not heartbroken,’” Father Schramel added, noting that he feels the same way.

Holy Ghost, located at 250 Coldwater Road and founded in 1875, is the oldest of the three churches making up Parish of the Holy Family. St. Helen, located at 310 Hinchey Road, has been in existence since 1940; and St. Jude, located at 4100 Lyell Road, was established in 1968.

In 2010, the three churches became a cluster known as the Gates Catholic Community. In 2016, the churches became one parish — Parish of the Holy Family — with all councils, staffs and ministries being combined. Also in 2016, the parish’s Vietnamese community moved its Masses from St. Helen to St. Jude.