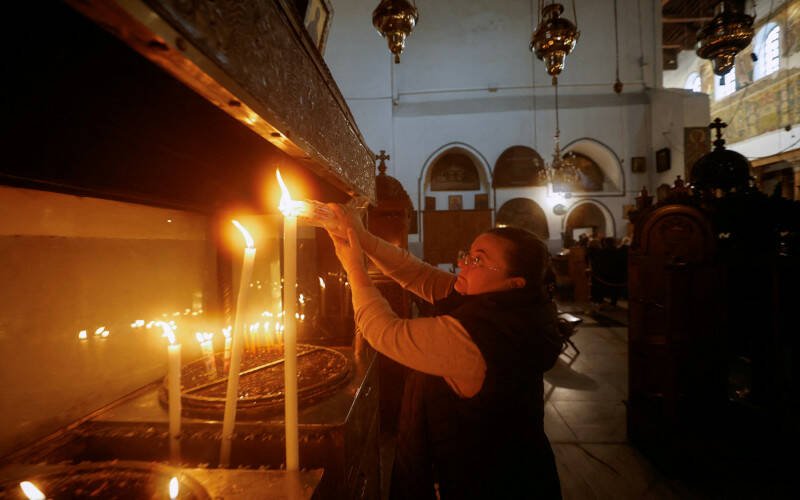 JERUSALEM (CNS) — Comparing the suffering Jesus and the Holy Family endured to the way many people and refugees are suffering today, the patriarchs and heads of churches of the Holy Land reminded the faithful of the “deep and abiding love” God has for all his people.

“Similar sorrows and travails continue to afflict the world in our time, whether they be in Ukraine, Armenia, Syria, or throughout the Holy Land itself,” said the church leaders in their Dec. 22 Christmas message, which listed problems such as threats of violence, forced registration, family displacement, and existence as refugees in a foreign land.

The Christian leaders expressed special concern for the “Christian remnant” in the Holy Land, which is under their pastoral care. The community has increasingly faced physical assaults on people and property, restrictions on freedom of worship and legal threats against possession and management of church property, said the church leaders.

In recent years, church leaders have come out against restrictions placed on worshippers by Israeli police during the Orthodox holy fire ceremony at the Church of the Holy Sepulcher during Holy Week. Such restrictions included strict and aggressive police presence and limits on people permitted to enter the church for the ceremony, which involves bringing forth the holy fire from the Edicule and sharing it with all the faithful at the ceremony, as well as flying it to Greece and other countries on special flights.

Young Christians especially have been affected by this growing discouraging environment, they said.

“Such a disheartening atmosphere has led to a lack of hope, especially among our Christian youth, who increasingly feel unwelcome in the land where their ancestors have dwelt since even before the birth of the church on Pentecost,” they said.

They said that as a result, many of the young Christians are leaving the region for places with greater opportunity, further reducing the Christian presence below its “tiny 2 percent” minority of the general population.

The leaders offered the message of Jesus’ birth as a “beacon of hope” to the youth, reminding them that “our Lord continues to suffer both with us and for us, leading us to new life in the light of his risen glory.” They added that the churches continue to offer places of comfort, strength and support through worship services, education, health care and meaningful employment opportunities.

Church leaders thankful for the return of Holy Land pilgrims

The church leaders also said they were thankful for the returning of pilgrims to the Holy Land and encouraged them not only to visit holy sites but also to engage and support the “living stones” of the local Christian community.

“Similarly, we invite Christians around the globe to support adherence to the religious Status Quo, and to continue to work and pray for a just and lasting peace in the land of our Lord’s birth — as well as in the many war-torn regions of the world — that the blessed message of hope first proclaimed by the angel to the shepherds around Bethlehem may more and more be realized throughout the earth,” they said.