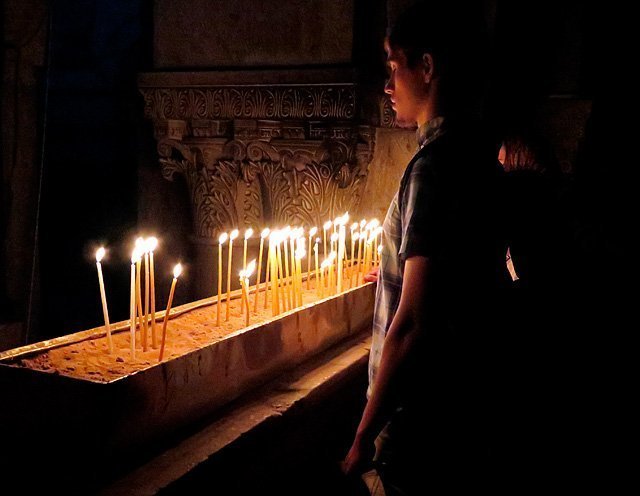 Pilgrims light candles Nov. 9 at the Church of the Holy Sepulchre in Jerusalem.

EDITOR’S NOTE: Staff Writer Annette Jiménez spent a week in the Holy Land in November on a familiarization tour organized for members of the Catholic Press Association. The tour was sponsored by the Israel Ministry of Tourism.

The history of Christianity in Israel — the birthplace of the world’s three major religions — is far too grand in scope to cover in a week.

But just a glimpse of those stories provides personal and spiritual enlightenment for pilgrims from all over the world.

"I give thanks to God for having given me the opportunity to come and experience the Holy Land," remarked Carmen Gómez, a native of Colombia who now lives in Miami, as she wrapped up a tour Nov. 7 with her group from Blessed John XXIII Church.

Also touring the Holy Land last month was a delegation from the Catholic Press Association, which represents Catholic publications across the United States and Canada. The group visited such sites as the Basilica of the Annunciation in Nazareth; the Sea of Galilee and the Mount of Beatitudes near Capernaum; the Jordan River at Qaser el-Yahud; and the Via Dolorosa in the Old City of Jerusalem. The junket was sponsored by the Israeli Ministry of Tourism.

The tourism ministry’s hospitality to groups like the CPA is intended to improve Israel’s image among prospective visitors after tensions with the Palestinians erupted again this past summer culminating in an August cease-fire, acknowledged Benjamin Gad-Ninai, the ministry’s director of hosting operations.

Gad-Ninai said that in 2013, Israel experienced one of its best years ever for tourism, with 3.5 million visitors. Yet according to the website www.theyeshivaworld.com the number of tourists visiting Israel dropped by 27 percent between July and September of this year.

Gad-Ninai said he takes issue with media depictions of Israel as a country in crisis, as members of the CPA recounted how some of their friends and family only had this negative image of the country.

Cheryl Ault-Barker of Brooklyn, who was visiting Israel last month with a group of more than 200 people from Morris Cerullo World Evangelism, said she and her fellow travelers never felt their safety was compromised.

"I put my faith in the almighty," Ault-Barker said as she stood by the Western Wall on Nov. 9, noting that this was her third trip to Israel.

And in walking around the cities and towns of the Holy Land, members of the CPA tour group sensed among the people a desire to live in harmony. For example, the group’s Israeli tour guide, Gideon Har-Hermon, took the group to a restaurant run by a Palestinian Catholic in a German neighborhood in Haifa.

Politics likewise ebb away when one tours the port cities of Jaffa and Caesarea to stand in the footsteps of St. Peter. In the Book of Acts, St. Peter left Jaffa to convert hundreds of Jews, then went north from Caesarea to Lebanon and on to Rome, Har-Hermon said.

"In Caesarea, he opened Christianity to the Gentiles," he added. "You are Christians because of St. Peter."

Representing 12 percent of the original city built by King Herod the Great over the course of a decade beginning in 22 B.C, the modern-day remains of Caesarea operate only as a national park, he said. The city was the site of St. Paul’s arrest before he was taken to Rome for trial, and where Romans celebrated after conquering the Jewish fortress at Masada in 73-74 A.D.

Reached by cable car or foot, the massive stone fortress of Masada sits more than 1,400 feet above the Dead Sea. It is where a group of 960 Jews including families led "The Great Revolt" from Roman occupation for about eight years beginning in 68 A.D. King Herod also had used the fortress as a winter palace and built storerooms, cisterns and water channels that one can still see today.

"It was an isolated cliff so no one could surprise you … and the enemy could be shut off from supplies," Har-Hermon noted.

The last 10 Jewish families at Masada decided to take their lives rather than surrender and become Roman slaves during the Roman Tenth Legion’s Siege, according to historical accounts written by Flavius Josephus, the commander of Galilee. Two women who survived that mass suicide told their story to Josephus, thus keeping the Masada story alive. Its chronicler, however, remains a controversial figure, Har-Hermon noted. A Jew raised in Jerusalem, Josephus had surrendered to the Romans at Yodfat prior to the mass suicide, he said.

Also at the Masada site is a church built by the Byzantine Orthodox Christians. Led by St. Helen in the fourth century, the Byzantines made their mark throughout the Holy Land, erecting the Basilica of the Annunciation in Nazareth and the Church of All Nations in Gethsemane.

Har-Hermon explained that conquering nations often employed "tel," a method of building on top of the ruins of a conquered city. "Israel has been conquered and rebuilt more than 14 times," he noted.

Israel’s many conquerors were attracted by its location as "the center of the world" between the continents of Europe, Africa and Asia, Har-Hermon said as he stood in front of a display at the Tower of David Visitors Center. The nation’s complex history of destruction and rebuilding continues to draw tourists from all over the globe, as evidenced by the many tour buses seen at historic sites.

Devotion to the Blessed Virgin Mary also was evident at the Basilica of the Annunciation in Nazareth, where a group of Irish pilgrims sang Nov. 6 in front of an image of her — the basilica displays numerous images of Mary donated by countries around the world — and others knelt in quiet prayer at a grotto in her honor.

Many pilgrims also attend Masses at Church of the Holy Sepulchre and the Church of All Nations, and follow the Via Dolorosa, a cobblestone path 40 to 50 feet above the path through the Old City of Jerusalem on which Jesus is said to have carried his cross to Calvary. Visitors stop at Stations of the Cross, chapels and merchant stalls that have been established along the winding street.

Undeterred by the pushing and shoving of tourists, a pilgrim also can feel the solemn mood upon entering the dark and cavernous Church of the Holy Sepulchre to pray the last three stations amid the fragrance of incense. Standing below an ornate and life-size silver crucifix, the visitor has reached Calvary and touches the sacred spot where Jesus’ cross stood.

Just several feet away in the church, pilgrims also kneel before the Stone of Anointing — where it is believed Jesus’ body was prepared for burial — and touch the stone for blessing of the religious articles they have brought along for this moment.