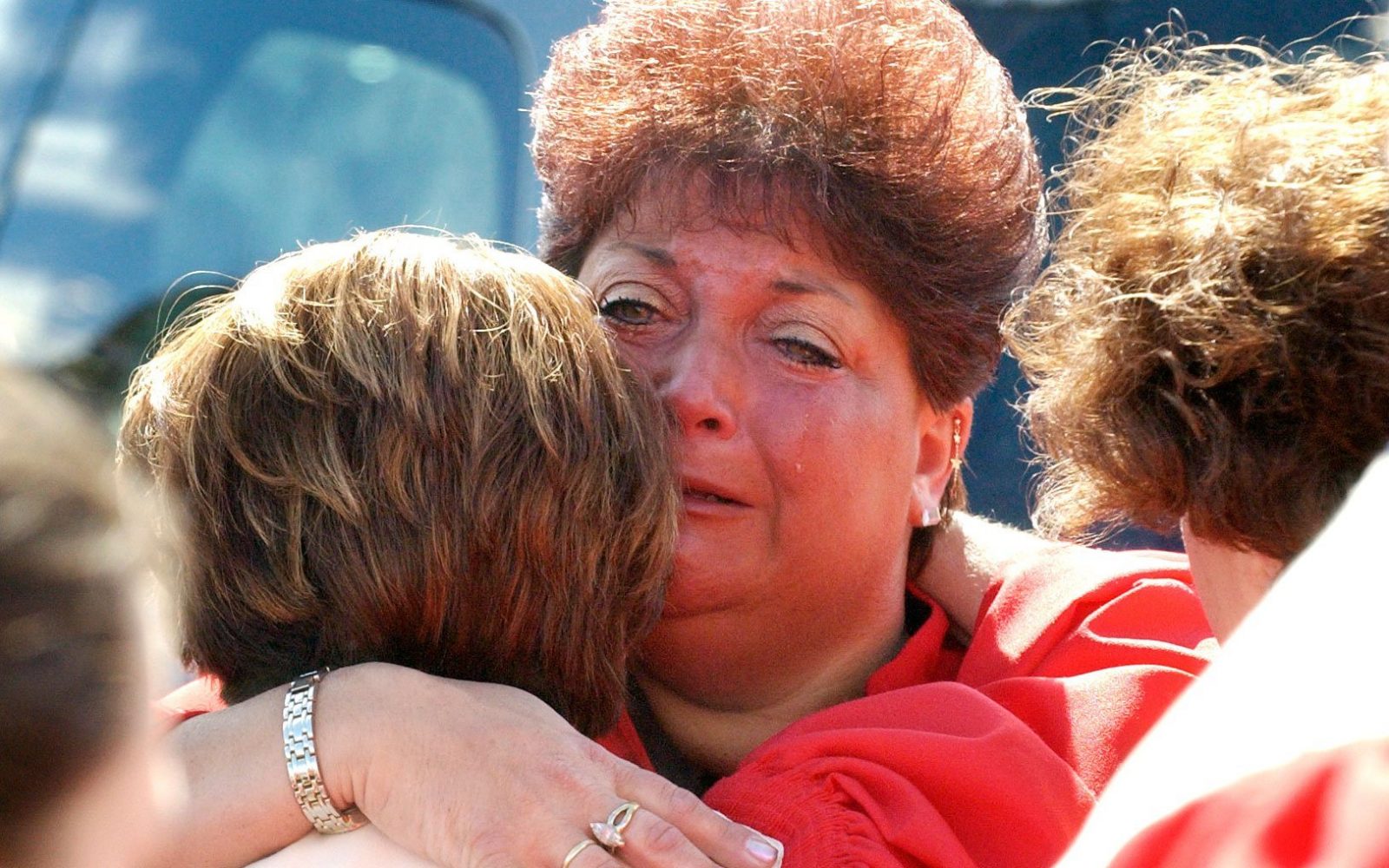 ROCHESTER — Parish records have been gathered, the tabernacles are empty and the altars are bare.

In addition to baptismal, marriage and funeral records and other items used in parish operations, each parish will bring to the cathedral reminders of patron saints.

A statue of Mary will be taken from Holy Rosary. Most Precious Blood parishioners will take a statue of St. Anne, the mother of Mary and grandmother of Jesus, as well as a relic from St. Gaspar de Bufalo, founder of the Missionaries of the Precious Blood order, which founded the church.

As part of his homily during each church’s final Mass, Cathedral Community pastor Father John Mulligan assured parishioners that God would accompany them on their journeys to a new church. He called on the example of Ezekiel, who came to realize that God was with the Israelites when they were in exile. God always shares in the joys and sorrows of his people, Father Mulligan said.

“He was at every sacramental celebration, every parish gathering and probably every parish bingo game,” he said during the Mass at Most Precious Blood.

Several active and retired priests returned to assist at Masses in the parishes at which they had been raised or assigned. Father Mulligan noted that Father Dan Tormey had celebrated his baptism, first Communion, confirmation and first Mass after ordination at Holy Rosary. The long connections with the parishes made the Masses difficult for the priests as well, he noted.

“You are ordained a priest, but you never think you will be called upon for the closing of a church,” Father Mulligan said, speaking after the Mass at Most Precious Blood.

No plans have yet been made for the future of the worship spaces, Father Mulligan said. In recent years, Most Precious Blood’s convent has become Mount Carmel House Hospice, its school is home to Generations Child Care Facility and its rectory has become Becket Hall. Holy Rosary houses several ministries as well, and its school, Cathedral School at Holy Rosary, also continues to operate.

According to a note in the March 9 Cathedral Community bulletin, although liturgies for the three parishes have been combined, the three parishes’ finances have not. For the time being, contributions made in Holy Rosary and Most Precious Blood envelopes will remain with those parishes.

Founded in 1889, Holy Rosary is the oldest of the three Cathedral Community parishes, and the existing church — the parish’s third — was built in 1916. The edifice’s stained-glass windows depict the 15 joyful, sorrowful and glorious mysteries of the rosary, and when Pope John Paul II added five luminous mysteries to the rosary in 2002, the parish commissioned paintings depicting the new mysteries.

Father Mulligan suggested that just as they have done for years as they prayed the rosary, Holy Rosary parishioners should continue to draw on inspiration from the Blessed Mother.

“On her journey, as difficult as it was, she never lost her faith in God’s guidance,” Father Mulligan said March 9.

Sally Brown of Irondequoit, Don Taylor of Greece and Kathy Eshleman of Rochester, members of the parish’s folk choir, said the group’s performance during the final Mass was most likely its last. Some members, such as Brown, have joined other parishes.

“We had a lot of fun, especially on nights we practiced,” Brown said. “It was like comedy night.”

Theresa Mingoia, as always, had a front-row seat saved for her for the final Mass at Holy Rosary. Mingoia has attended Mass at the parish every day for more than 50 years.

“That’s why they reserved my spot,” she said.

She began attending Holy Rosary when she moved to the neighborhood. She had previously attended St. Patrick Cathedral and St. Anthony of Padua Parish, both of which are closed.

“I’ve enjoyed it so much; all the priests were great,” said Mingoia, noting that she will probably begin worshipping at the cathedral.

Wiping away tears — both her own and those of her children — Andrea Fien of Rochester said her children are the fifth generation of her family to attend Holy Rosary School. She said her family plans to spend Palm Sunday and Easter with her husband’s family in Rush.

“After that, we’re not sure,” Fien said. “We’ll go down and visit the cathedral, but I want more of a traditional church. We’ll be looking around.”

Holy Rosary members at the closing Mass said they felt as if they had lost a family member, and that sentiment was echoed by members of Most Precious Blood. There, parishioners said their parish’s familial atmosphere and Italian roots made it unique.

Patti Liberatore Greco of Greece said Most Precious Blood parishioners were somewhat amused to be asked to introduce themselves to others at the parish’s final Mass.

“Everyone had a giggle because everyone in church I think already knew each other,” said Greco, who attended the parish school from kindergarten to eighth grade.

Part of that stems from the influence of longtime parishioners, such as Bernardine Gordon, who has been attending for more than 70 years. Her parents, James and Bridget Huether, donated the land on which the church was built. The parish’s first Mass was March 3, 1930.

With the departure of the Precious Blood Fathers in the 1980s and the changing demographics of the City of Rochester, the parish began to change, Gordon said. Many parishioners moved to the suburbs and did not come back. Now, attendance and collections are down.

“That is why we are closing,” said Gordon, who added that she will remember the closing each day since the church is in her back yard.

“It’s sad, but I think that it’s necessary,” added Gordon’s sister, Sister of St. Joseph Dolores Anne Huether of Rochester, during a reception following the closing Mass. Sister Huether said she remembers construction of the first church and its dedication, which also was presided at by Bishop John Francis O’Hern, the third bishop of the Diocese of Rochester.

Gordon and Sister Huether said their family was extremely involved in the parish over the years, including serving in the choir and in the sodality. Their father was one of the church’s two trustees and served as school janitor for 13 years.

Like many others, Sister Huether compared the parish’s closing to a death in the family.

For others, Most Precious Blood’s closing left them feeling a little lost. Mirella Antinarella of Chili said she and her husband haven’t decided which parish they will attend next. They began attending the predominantly Italian parish when they moved to Rochester from Italy in 1972.

Natasha Hibbert of Greece, a parishioner for about the past six months, said she had previously attended the cathedral before trying out Most Precious Blood.

“It’s such a community here,” Hibbert said. “You attend Mass once and they speak to you. It’s like a family, so it’s heartbreaking to see the church close and how all the people are affected who have been coming here their entire lives.”

Others were more upbeat. Deacon John Giugno said he, for one, is looking forward to the move to the cathedral.

“For me, the move is exciting,” he said. “The cathedral is a beautifully renovated church.”

Sister of St. Joseph Francis Mary Rossi of Irondequoit, who taught at Holy Rosary School and served as a pastoral associate at Most Precious Blood, said one asset parishioners from both parishes will take with them is the willingness to work toward a goal, such as building the parish, tackling neighborhood crime or helping raise funds.

“They will carry this tradition and they will act as Christian people wherever they are to go,” Sister Rossi said.

“Life is one change after another,” she added.