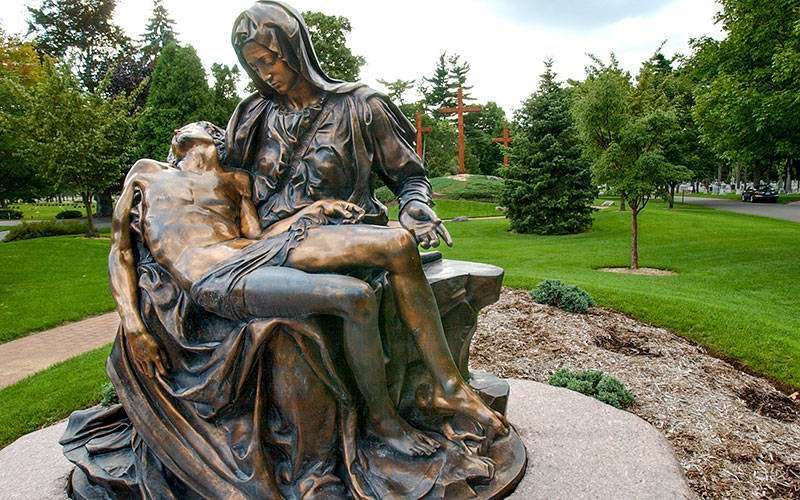 A bronze statue depicts the Blessed Virgin Mary cradling the dead body of Christ after his crucifixion.

Not long after becoming the Diocese of Rochester’s first shepherd in 1868, Bishop Bernard J. McQuaid wanted to provide a common burial ground for all members of his flock.

After much planning and research, he secured a 110-acre tract of land on both sides of what is now Lake Avenue in Rochester. He consecrated Holy Sepulchre Cemetery on Sept. 10, 1871, in a ceremony that drew 10,000 people.

According to a history on the cemetery’s website, Holy Sepulchre’s mission over the past 150 years has been to “assist the Church in fulfilling its ministry to bury the deceased of the faith community in consecrated ground.”

The cemetery will commemorate 150 years of faithfulness to that mission with a Sept. 18 anniversary event beginning with an 8:30 a.m. sesquicentennial Mass celebrated by Bishop Salvatore R. Matano in the cemetery’s Christ Our Light Mausoleum. The Catholic Courier will livestream the liturgy at www.youtube.com/catholiccourier.

Following Mass, a ceremony will take place on the east side of the cemetery at the grave of Claude Martin Duffy. The infant son of a prominent local couple, Claude became the first person to be buried at Holy Sepulchre on Sept. 18, 1871, according to Joy Pierce, the cemetery’s director of marketing.

Since that first burial, the cemetery has grown to include chapels, crypts, shrines and mausoleums on more than 450 acres of sacred land.

A March 2018 Catholic Courier article noted that Holy Sepulchre’s first chapel, All Souls, was erected in 1886. In 1938, a crypt was built within the chapel to house the remains of Bishops McQuaid, Thomas Hickey and John F. O’Hern; it also would become the final resting place of Bishop James E. Kearney, who died in 1977. Construction began in 1978 on the Resurrection Garden Mausoleum, followed by All Saints Mausoleum, which was added in 1993.

In 1983, a change in canon law allowed Catholics to be cremated under certain circumstances, and Holy Sepulchre added shrine sections and columbaria (cremation niches) in its mausoleums as well as graves for cremated remains.

Christ Our Light Mausoleum was dedicated in 2008 and continues to add features, Pierce said, noting that The Beatitudes Glass Niche Wall in the mausoleum’s chapel was completed in July.

In 2010, construction was completed on Holy Sepulchre’s first auxiliary site, Ascension Garden in Henrietta, which offers more than 100,000 burial spaces. Most recently, Pierce said, Holy Sepulchre developed and opened the Angels of God Cremation Garden at the Lake Avenue campus, and Bishop Matano dedicated it on Sept. 19, 2020.

In 2013, Holy Sepulchre and Ascension Garden received Green Burial Certification, the first for any Catholic cemetery in the state, according to a 2013 Courier article. Green burials are aimed at conserving natural resources, reducing carbon emissions, protecting worker health, and restoring or preserving habitat.