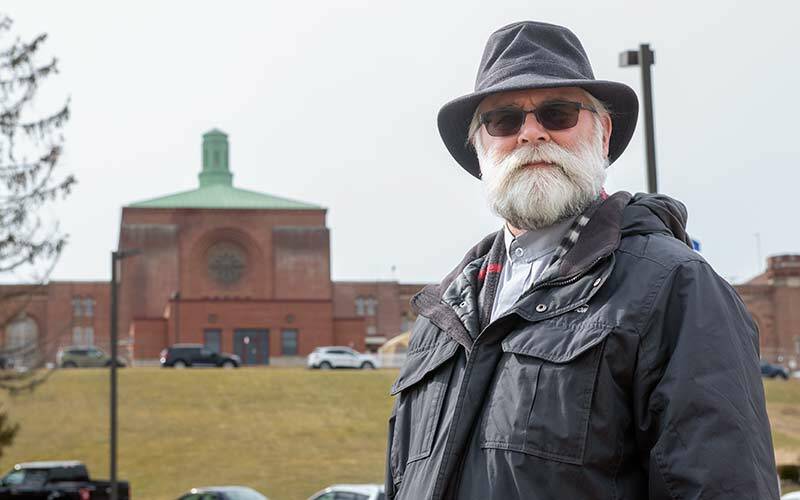 Deacon Douglas Farwell is seen outside of the Elmira Correctional Facility where he is chaplain. (Courier photo by Jeff Witherow)

“I will tell you right now, that was my mindset: ‘You did the crime, you do the time,’” he recalled, adding that associating with prisoners “was the last thing on my list.”

The Holy Spirit, however, had a different view.

While in formation for the permanent diaconate in 2011, Deacon Farwell received one of four field-ministry assignments: prison chaplaincy at Elmira Correctional Facility.

His experiences there changed his attitude, leading him to appreciate the importance of spiritually guiding prisoners toward improving their lives, he said.

Deacon Farwell ended up being so drawn to the ministry that in January 2016 he became full-time chaplain at the Elmira prison upon the retirement of Deacon Michael McGuire. He remains the chaplain today and credits a higher power for that outcome.

“The Holy Spirit led me down this path and opened my eyes,” said Deacon Farwell, who was ordained in 2013 and has served since then as parish deacon at Ss. Isidore and Maria Torribia Parish in central Steuben County.

As part of his work at Elmira Correctional Facility, he oversees a Rite of Christian Initiation of Adults program, which has proven successful. “Several men have joined the church,” he noted.

That’s a significant achievement, since Elmira is a maximum-security prison housing men who have committed murder, rape and other grievous crimes.

Yet the chaplain manages to connect with prisoners who express a desire to change their lives.

Trust is the foundation of such connections, he said. “When they see you’re sincere, they will draw to you,” he observed, noting that he strives to show empathy for the many prisoners whose lives have been scarred by violence, poverty and lack of a stable family.

“I don’t condone their crimes, but I have a better feel for where they come from,” he explained.

Yet maintaining continuity in prison RCIA formation can be challenging, Deacon Farwell noted. Inmates are often transferred out on short notice and, more recently, religious activities at the prison were scaled back due to the coronavirus pandemic.

A few men currently are interested in joining the church, and the deacon is coordinating their formation with the help of a Catholic inmate who has been at the Elmira prison since 2014.

Most people completing RCIA typically receive confirmation, first Communion and/or baptism during the annual Easter Vigil liturgy. At the correctional facility, however, sacraments are administered on a less predictable schedule because the prison does not have a regularly assigned priest, Deacon Farwell said. In 2016 and 2018, Bishop Salvatore R. Matano visited the facility to administer the sacraments to men who had completed the RCIA process.

Once prisoners are initiated into the Catholic Church, the deacon observed, they’re much more likely to remain committed to a better way of life.

“A handful of guys, I’ve seen them change their lives,” he said, recalling one such inmate who “would just as soon slap you as look at you” when they first met. But since 2018 when the man entered the church through the RCIA, “I have seen a change in this guy — sending Bibles to his family, constantly talking to me one-on-one if he’s struggling with something.”

A strong faith life can help inmates avoid getting into trouble in prison and after being released, Deacon Farwell added. “I tell them, ‘The first thing you do when you leave here is go find a church.’”

He acknowledged that only a small percentage of inmates end up embracing faith, but “if you have 10 guys and one becomes serious, that becomes a victory. The success stories are what make (my efforts) worth it.”

Deacon Farwell said he doesn’t give up on inmates who express discouragement or cynicism, but instead prays with them that they can put their lives in God’s hands and hopes that he can at least plant a seed.

The chaplain said his dedication to prisoners is a mark of his own conversion, saying he strives to emulate Jesus’ emphasis on ministering to those in the greatest spiritual need.

“It’s easy for us to turn away, but we need to go to the sinners,” he remarked. “That’s what God put me here for.”

EDITOR’S NOTE: This article is part of the Catholic Courier’s “Profiles in Faith” series, highlighting Catholics in the Diocese of Rochester of all ages and walks of life who are role models for living the faith. To suggest someone to profile, email Newsroom@CatholicCourier.com.