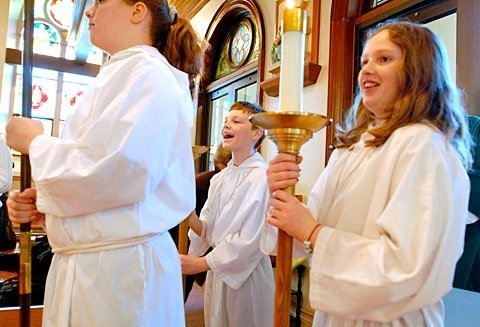 Altar servers stand at the back of Holy Trinity Church before the start of a Mass in 2008.

Like her mother before her, Clare Schreiber serves as organist of Holy Trinity Parish in Webster.

Like his father before him, Denny Schultz has been an active member of Holy Trinity’s building committee.

The fact that a new generation of parish leaders is stepping up is one reason why Holy Trinity’s retiring pastor Father William Michatek views the parish’s future with optimism.

"There’s a strong foundation of people who founded the church 150 years ago," the priest said.

Holy Trinity will celebrate its 150th anniversary during and after the 10:30 a.m. Mass June 19, which also is Trinity Sunday. Parishioners also will honor Father Michatek, who is retiring in June from the parish where he has been pastor since 2003 and where he served as assistant pastor from 1969 to 1975.

Bishop Matthew H. Clark will celebrate the Mass, and there will be food, games and activities for the young and old. Tickets are available in the parish office and cost $5 per individual and $10 per family.

A century and a half ago, the parish was begun by German immigrants who settled in Webster and were unable to routinely travel to St. Joseph, Rochester’s German parish. Redemptorist Father Francis N. VanEmstede of Rochester celebrated the first Mass in 1859 in a home at 1349 State Road, Webster, according to a 2001 parish history, Through the Years — a 140-Year Journey of Faith (1861-2001).

Land was donated and purchased on the north side of Ridge Road, and the cornerstone for the church was laid in 1861. The building was dedicated only three months later.

"My grandfather would tell me stories about when he was a young man, and he would go with his father and other farmers to Lake Ontario to get stones to build the foundation for the (first) church," Schultz said.

Longtime parishioner Dorothy Miller, 89, of Irondequoit, said her grandparents, Anna Dorothy Lintner and John Adam Miller, were the first couple to be married at the parish. They were married April 11, 1861, according to Through the Years.

In 1866, an additional six acres were purchased for the cemetery and school, and a year later, the first pastor, Father A. Heckinger, was appointed.

The current church was completed in 1901, and the original church was torn down in 1926. A new school building opened a year later.

Miller said that in the early days of the church, parishioners annually rented spots on the church’s pews. Miller recalled the day a large man found a woman sitting in his designated spot; he was not deterred from sitting there.

Miller said her days at Holy Trinity School also made an impression. She said the school was very focused on teaching religion, and students also were responsible for helping out with the maintenance of the school; Miller helped clean the basement stairs.

Schultz, who also attended the school several decades later, said the Sisters of St. Joseph were a memorable fixture at the school. They taught there from 1879 to 1986 and they lived adjacent to the school until a convent was built in 1923.

"The nuns taught us respect and our religion, and the priests enhanced that," Schultz said.

The parish experienced rapid growth when the population of Webster boomed in the 1960s and 1970s, due to major expansions at Xerox. Ground was broken in 1968 for the east wing addition to the church, which included a new rectory for the priests, and in 1969 the old rectory was demolished so that the west wing could be added on to the church. The project increased seating capacity at the parish from 430 to 700.

In 1999, the parish’s former convent became the home for an outreach ministry to Webster’s needy called Trinity House of H.O.P.E. (Holy Trinity Outreach Program to Everyone). Now called Hope Ministry, the organization provides food, clothing, and subsidies for medical or material needs, education or shelter to those facing financial crisis. More than 185 families a month seek help from Hope Ministry, which is supported by churches and groups from throughout Webster.

The ministry is just one example of parishioners’ giving spirit, Schreiber said.

"They are a very giving parish," she said. "We have over 200 volunteers that give of their time and talents."

Skilled volunteers from the parish also gave their time to help build a major expansion of parish facilities called the Trinity Life Center. In 2002, the parish completed the first phase of the "TLC," as it was nicknamed. This phase added a large gathering space that connected the church and school and included bathrooms, meeting rooms and an elevator.

In 2008 Holy Trinity dedicated the second phase of the TLC expansion, which includes Murphy Hall and its gym, hall, renovated kitchen and stage.

Although parishioners had hoped Murphy Hall would be heavily used by Holy Trinity School students, the school was closed a few months after the hall opened. The hall is still used for parish functions and by the CYO program and other groups.

In addition to having the tenants and a new gym and hall, the parish has growth potential, Father Michatek said. He noted that Webster still has a lot of open land, and the parish has seen an influx of people moving from some of Rochester’s other suburbs.

Some are drawn to the Romanesque-revival-style church’s architecture, said Schultz, who is cochair of the stewardship committee and cochair of the fundraising committee.

"The church is beautiful," he said. "It’s an old-style church with a beautiful sanctuary, and we bring a lot of people that are here back to their roots."

Schreiber said the parish also is filled with strong singers and has a children’s choir, a contemporary choir and an adult traditional choir. It also has its own song for the sesquicentennial, which Schreiber and pastoral minister Colleen Schantz cowrote.

Parishioners hope they will be singing that song for a long time.

"Everybody’s very optimistic for our church to still be here after 150 years," said Denny Schultz’s wife, Pam, who serves as the parish secretary. "It’s a test of our faith and time and talent and treasure to keep this church going strong for our past and present and future."