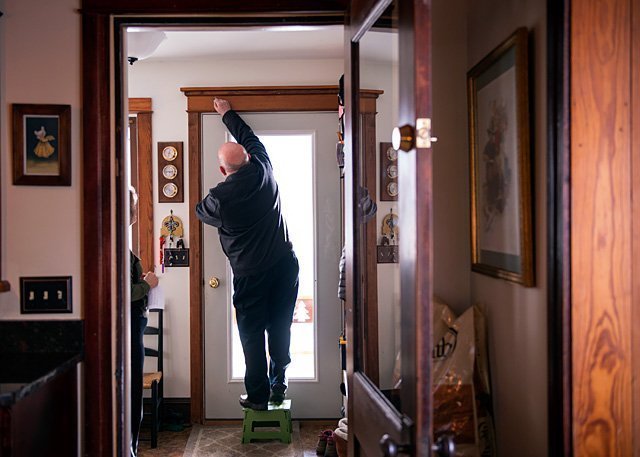 Deacon Dave LaFortune blesses the home of Cheryl Ambrosone-Reinhart of Hammondsport on Jan. 7 in celebration of the feast of the Epiphany.

For Catholics in Schuyler and Steuben counties, ringing in the new year isn’t limited to champagne toasts and noisemakers.

These folks’ acknowledgments also involve holy water and chalk, courtesy of visits to their homes by area priests and deacons.

Special blessings for members of Schuyler Catholic Community and St. John Vianney Parish were bestowed upon numerous residences during the late morning and early afternoon of Jan. 7. The rites were performed in conjunction with the feast of the Epiphany, which was celebrated this year on Jan. 8. 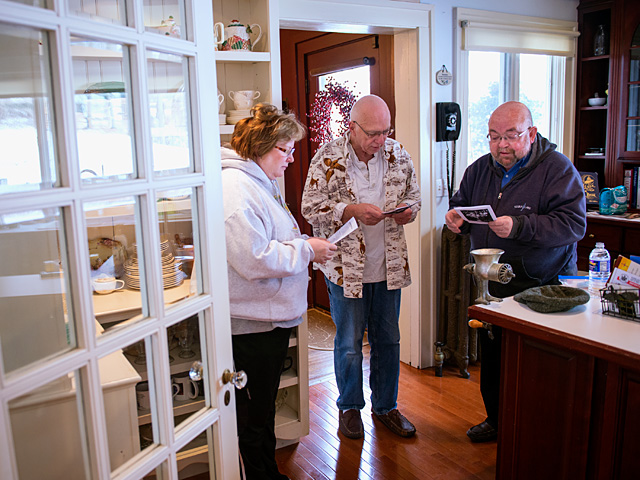 At each home the presider invited residents to join in prayers and Scripture readings, and also sprinkled holy water in various rooms. In addition, the presider used previously blessed chalk to make an inscription near the top of the main doorway, writing numerals for the new year, crosses and the initials C, M and B for the Latin phrase Christus Mansionem Benedicat — "May Christ bless this house." These letters also stand for Caspar, Melchior and Balthasar — the names of the three Magi who visited the infant Jesus, an event commemorated on the feast of the Epiphany.

Blessings of homes were begun approximately 10 years ago in the Schuyler cluster of St. Mary of the Lake Church in Watkins Glen and St. Benedict in Odessa, under then-pastor Father Paul Bonacci. The blessings carry on today under Father Steve Lape, the current pastor. He, Deacon Thomas Ruda and Deacon Dan Pavlina visited approximately 15 houses early last month, working off sign-up sheets that had been made available in the churches. All the blessings were done on Jan. 7 except for two last-minute requests that Father Lape honored the following day.

A Schuyler connection also exists with the Epiphany home blessings at St. John Vianney Parish in Steuben County. Deacon Dave LaFortune, formerly a pastoral associate in the Schuyler cluster, sought to introduce the tradition to St. Mary Church in Bath and St. Gabriel in Hammondsport when he became pastoral administrator at those churches in 2009 and 2010, respectively. The blessings still take place annually among both churches, which formed into St. John Vianney in 2012 and are still led by Deacon LaFortune.

Home blessings at the feast of the Epiphany are a longtime tradition of the Catholic Church. The rite doesn’t actually require priests or deacons to be present; it also may be done by the head of a household, and guidelines may be obtained from the local parish or online resources. On the other hand, Father Lape and Deacon LaFortune said that residents in their regions — in both village and rural settings — appreciate being visited by their parish leaders.

"It’s a wonderful way for my staff and myself who do the blessings to get out to the homes of parishioners. They enjoy it," Deacon LaFortune said, noting that he, Deacon Bob Colomaio and Deacon Thomas Jack did blessings at 21 homes on Jan. 7 for families and individuals who had signed up.

Father Lape noted that the tradition of home blessings is derived from Matthew 2:11, the only Gospel account of the Magi going to Bethlehem. He pointed out that their visit took place at a house where Mary, Joseph and Jesus apparently relocated after the birth in the stable. The house was where the Magi prostrated themselves, did Jesus homage and offered him gifts of gold, frankincense, and myrrh.

"Connected with that, we are asking God’s blessing for hope and peace and joy in the house," Father Lape said of home blessings. He added that "people feel a greater sense of hope and joy and optimism for the new year," stating that the chalk marking on the front door serves throughout the year as "a reminder that Christ dwells in their house."

Deacon LaFortune said the visits often take on pastoral dimensions, as he seeks to spend extra time with such folks as new parishioners, those who are ill, others who are alone and lonely, and families with children who take part in the home blessings. Along those lines, he observed that the blessings are not earmarked for the structure so much as for its inhabitants.

"What we’re really doing is blessing the people in the house, and all the people who will come and go there throughout the year," Deacon LaFortune said.