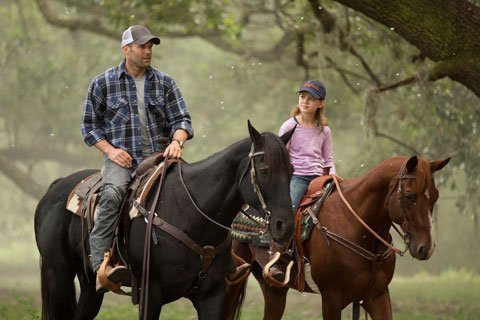 NEW YORK (CNS) — The 100-minute curse-athon that is "Homefront" (Open Road) combines the violent tropes of a meth drama with tender scenes of domestic life to less than compelling effect.

With a screenplay by Sylvester Stallone adapted from the novel by Chuck Logan, you expect more gunfire than monosyllabic dialogue, plus caricatures of bad guys. Check and check.

Everyone except for 10-year-old Maddy (Izabela Vidovic), the little girl central to the family plotline, has a limited vocabulary spewed at high speed — and oppressively high volume.

Phil’s never far from a bubbling meth lab. In his new hometown, where Maddy strains to fit in with the local kids, it’s operated by drawling thug Gator Bodine (James Franco).

Gator learns of Phil’s background and, with the help of his girlfriend, Sheryl (Winona Ryder), sets up a climactic battle with the bikers during which Maddy is held hostage.

Other potty-mouthed Cajuns under the direction of Gary Fleder include Cassie (Kate Bosworth), Gator’s meth-addicted sister, whose mottled family life and parenting skills affect Maddy on the school playground.