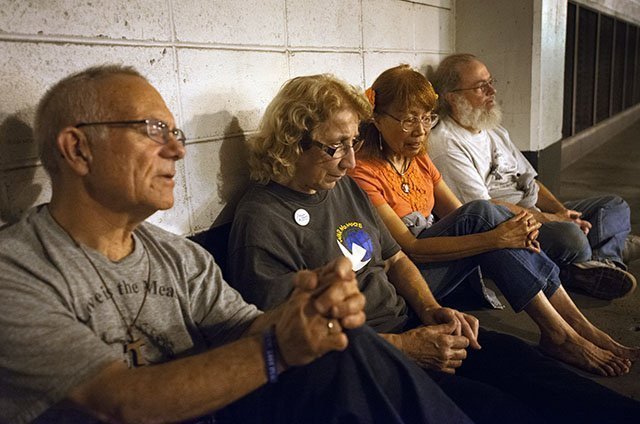 Tom Malthaner (from left), Sister Grace Miller, Heide Parreño and Harry Murray pray the rosary while spending the night in the Civic Center Garage in Rochester after being asked to leave by garage employees Aug. 20. Malthaner and Miller were among three advocates arrested for protesting in the Monroe County Office Building Sept. 15.

Three local advocates for the homeless were arrested Sept. 15 for protesting Monroe County’s rejection of their proposal to create a new homeless shelter downtown that would accept all homeless regardless of drug or alcohol addictions.

According to the Monroe County Sheriff’s Office, Sister of Mercy Grace Miller, 79; John Malthaner, 70; and Ryan Acuff, 32, were arrested and charged with third-degree criminal trespass at the Monroe County Office Building in Rochester.

"The three individuals refused to stay in the area designated for the protest and were being disruptive," Cpl. John Helfer, spokesman for the Monroe County Sheriff’s Office said in an e-mail Sept. 16. "Around 30 protesters were present at the time of the arrests."

Other recent protests over sheltering the homeless took place in August when about 30 homeless people were locked out of the Civic Center parking garage in Rochester where they had spent nights. The Civic Center Monroe County Local Development Corp. owns the garage and it is operated by MAPCO Parking. Advocates have said many of those living in the garage were not eligible to use existing shelters in downtown Rochester.

Existing shelters, which operate under contract with the county, accept only those who are in treatment for addictions or who have committed to attempting a treatment plan.

"It can’t be overstated that Monroe County already invests nearly $5 million and contracts with 17 shelters for emergency housing each year and will continue to work closely with reputable service providers to fill this important need," Justin Feasel, county spokesman, said in a statement. "The county will not use taxpayer dollars to pay for a facility that would encourage active illegal drug and alcohol abuse."

Advocates have said that the county’s current homeless facilities are insufficient to meet the demand and that research has shown people who are homeless may need a safe place to live before they can be successful in addiction treatment programs.

"If the research shows that housing first and shelter first models are the most effective methods of alleviating homelessness and HUD (the federal department of Housing and Urban Development) is recommending it as a best practice, why is the county fighting us in implementing HUD’s recommendation and insinuating that the research-based approaches we are recommending actually encourage ‘illegal drug and alcohol abuse’?" asked an open letter from Sister Miller, Malthaner and Acuff that was circulated on social media Sept. 15, the day of their arrest.