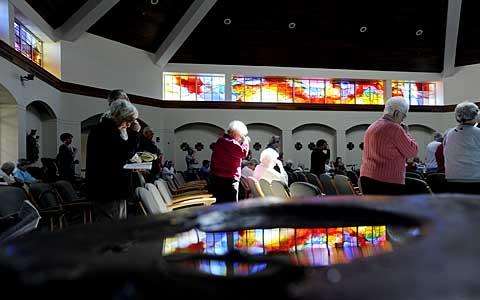 In 2007 the Sisters of Mercy held an open house at their motherhouse on Brighton’s Blossom Road to mark their congregation’s 150th anniversary in Rochester. The motherhouse had stood at that location for nearly eight decades, so the sisters were surprised to learn that many people had never known the structure’s purpose.

"People came in and said, ‘I always wondered what this building was,’" recalled Sister of Mercy Sheila Stevenson. "They were really pleased to get a sense of what it looks like."

The building, now called Mercy Center, serves as a hub for the Sisters of Mercy in the Diocese of Rochester. The house incorporates a residence, place of worship, home base for several ministries and an office space, among other functions.

"I call it the hub of the Sisters of Mercy," said Mercy Sister Anne Carapella, Mercy Center’s house administrator. "It’s a residence, and it’s where we have celebrations, gatherings, funerals."

In the same way, the Sisters of St. Joseph Motherhouse on French Road in Pittsford performs similar functions for local members of that congregation, noted Sister Elizabeth Snyder, house director at the SSJ motherhouse.

Mercy Center was built in 1931, attached to Our Lady of Mercy High School. For many years it served as the Mercy sisters’ motherhouse, or central location, and home to the congregational leadership. That changed Jan. 1, 2008, however, when the Mercy Sisters of Rochester joined with their counterparts in Buffalo, Pittsburgh, Erie, Pa., and the Philippines to form the New York, Pennsylvania, Pacific West Community. Leadership for this new community is based in Buffalo, so the former motherhouse on Blossom Road is now known as Mercy Center, Sister McGinn explained.

"It’s a hard change for us because we’re used to calling it the motherhouse," she said.

Mercy Center does house some of the new configuration’s administrative offices, including the finance and information-technology offices, and Sister Stevenson is one of the community’s two vocations ministers. Sister Stevenson said she regularly holds "Soup and Scripture" discussions in one of Mercy Center’s kitchens and often meets at the center with small groups of women interested in learning more about vocations.

"It’s also a good place for those young women to get to know the wisdom of the sisters here, what inspired their vocations and what their life has been like as a Sister of Mercy," she said.

The center also houses a number of ministries, including Mercy Bridges, which provides basic literacy services and helps adults learn English as a second language. Our Lady of Mercy High School frequently uses Mercy Center’s large chapel for such special events as its annual Rose Mass for graduating seniors, and other groups, including the Notre Dame Club of Rochester, also occasionally use the chapel. And of course, the sisters frequently worship in the chapel during Masses, funerals, celebrations and gatherings.

Mercy Center also is home to Katie’s Tea and Gift Shop, which sells gifts and cards as well as sacramental gifts for such special occasions as first Communions and baptisms. The shop is named after Catherine McAuley, founder of the Sisters of Mercy, who was well-known for her care and compassion for others.

In fact, Mother McAuley is rumored to have told the sisters caring for her on her deathbed to make sure they took time for "a comforting cup of tea" after she passed away, Sister McGinn said. Thus, the tea cup has become a favorite symbol among the Sisters of Mercy, and small decorative tea cups grace the doorways of the offices in Mercy Center.

The Sisters of St. Joseph Motherhouse likewise includes a gift shop with an appropriate title, said Sister of St. Joseph Mary Anne Laurer, director of the congregation’s office for mission advancement. Cornerstone Crafts was named long ago when it still was housed in the sisters’ former motherhouse, which was sold to Nazareth College in 2002 and now is known as Golisano Academic Center.

"In the old motherhouse (the gift shop) was down in the lower level, and it was at the corner of the motherhouse where the cornerstone was," Sister Laurer said.

The new motherhouse was constructed in 2002 and quickly became a home for the sisters," said Sister Mary John Van Atta, a self-described "happy resident."

"What makes this different than every other convent is that it’s the heart of the life and mission of our congregation. It is the place where the whole congregation comes to celebrate or discern," said Sister Van Atta, who publishes News Notes, a regular newsletter for the motherhouse’s residents, employees and guests.

The motherhouse is a home not only for the sisters who actually live there, but for the entire congregation, she added. The peace-and-justice and vocational-formation offices operate out of the building, as do several ministries, she said. The motherhouse also houses an altar-bread distribution operation and a realty business, which Sister Laurer described as "a spiritual ministry as well as a financial ministry."

Parish and school groups often hold staff retreats at the motherhouse, and neighbors and community members frequently attend both daily and Sunday liturgies at its chapel, she added.

The Sisters of Mercy are called not only to care for the poor, sick and uneducated, but also for each other, Sister Stevenson noted. The Sisters of St. Joseph share a similar charism, Sister Snyder said, so both the SSJ motherhouse and Mercy Center also house elderly and ill sisters, as well as priests and occasionally laypeople who are related to the sisters. Both facilities are capable of housing people who can live independently as well as those who need various levels of medical care.

The Sisters of St. Joseph Motherhouse, for example, has a total of 150 beds, 20 of which are in a special memory-care unit for sisters and priests suffering from memory problems or Alzheimer’s disease. Another 20 beds are in a skilled-nursing unit, 80 are in assisted-living units and the balance are in independent-living units, Sister Laurer said.

Both facilities provide sisters and priests with access to doctors and physical therapy, as well as frequent opportunities for activities and social events. Each month Mercy Sister Mary Marvin puts together a calendar of activities with at least three activities offered each day for Mercy Center residents to participate in if they so choose. These activities run the gamut from ice cream socials and baking sessions to manicures and African drum circles.

Residents can find everything they need at these facilities, and this allows them to hang on to their independence and dignity for as long as possible, Sister Van Atta said. Sisters initially were concerned about the large number of sisters using walkers and wheelchairs to navigate the halls and grounds of the Sisters of St. Joseph Motherhouse, she said.

"Then it dawned on us: That means they can be independent," Sister Van Atta said.

Residents of both the SSJ motherhouse and Mercy Center also participate in prayer ministries, devoting time each day to pray for particular individuals, organizations or ministries. This allows even ill or infirm sisters to still carry out their vows and continue in ministry.

"We never retire from ministry because we are always trying to serve in some ways," Sister McGinn said.