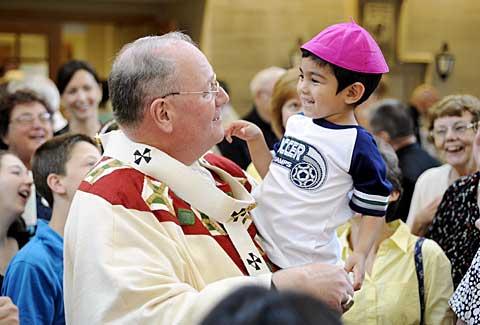 ROCHESTER — The sacrifices of martyrs and priests have borne much fruit for the Catholic Church and mirror Jesus’ sacrifice celebrated in the paschal mystery, said Archbishop Timothy M. Dolan, speaking at a special Mass June 22 at Sacred Heart Cathedral.

With thunder punctuating his homily, Archbishop Dolan said he was deeply happy to be in the company of Bishop Matthew H. Clark, who served as his spiritual director and confessor when he was a seminarian at the North American College in Rome. Bishop Clark was rector of that college.

Bishop Clark returned the compliment, telling the archbishop that those assembled had been graced by his presence.

"We hope that you will return often," Bishop Clark said.

Archbishop Dolan said he was happy to be in the Diocese of Rochester, because he is a church historian and had studied several of the diocese’s influential bishops. Of Bishop Bernard McQuaid, the diocese’s first bishop he said, "His influence went far beyond his 40 tumultuous years." He called the late Archbishop Fulton Sheen, "the most illustrious person ever in the history of the Catholic Church in the United States."

He spent much of his homily speaking about the sacrifices priests make on behalf of the church. He cited the example of St. John Fisher, the English cardinal who was martyred 475 years ago to the day — June 22, 1535 — and who has been a saint for 75 years. St. John Fisher bore King Henry VIII’s wrath over being denied an annulment of his marriage to Queen Catherine of Aragon so that the king could marry Anne Boleyn. St. John Fisher was charged with treason and beheaded for refusing to make an oath of supremacy to King Henry VIII as head of the English church.

Archbishop Dolan noted that the saint was renowned for his heroic integrity and lived out that reputation until his death.

"He addressed the crowd (at his execution) and told them in a clear voice that he was dying for Christ’s faith in one holy, Catholic and apostolic church," Archbishop Dolan said of St. John Fisher.

The archbishop also cited the jubilarian priests honored at the Mass for their examples of fidelity and faithfulness, noting that their day-to-day sacrifices are reflected in the Eucharist.

"That is a paradigm of the priesthood," Archbishop Dolan said, paraphrasing theologian and Jesuit Father Walter Burghardt. "Jesus takes us, blesses us, breaks us and gives us."

He pointed out that in the Martyrs’ Chapel at the Venerable English College in Rome, the altar is a butcher block and in it are relics of English martyrs ordained from the college and sent to minister in England knowing they would become martyrs.

He also cited Pope John Paul II’s public suffering from ill health at the end of his life as another example of how priests are called to pour themselves out for the church.

He also told the story of a friend and classmate in seminary whose health deteriorated over the course of 10 years due to multiple sclerosis. One day, after falling and nearly hitting his head on a marble altar while in Rome, the friend held onto the altar to steady himself as he preached. Friends commented afterwards that it was the best description of the priesthood they had ever witnessed, Archbishop Dolan said: A priest is unable to stand alone, so he clings to the altar and to God.

That anecdote of the priest needing to hang onto an altar struck a chord with Maureen Madonia, a parishioner of St. Thomas the Apostle Parish in Irondequoit. She said the presence of many priests at the Mass also was very moving.

"Seeing all those wonderful priests just brought tears to my eyes," Madonia said.

A contingent of St. Thomas the Apostle parishioners attended the Mass in part to see Archbishop Dolan and in part to inform him of the situation of their parish, which has been marked to close, said Jennifer Lockemeyer, chairwoman of St. Thomas’ parish council.

"You can feel his bright light," Lockemeyer said.

The chance to see priests who formerly had been at his parish in Sodus and to celebrate the Year for Priests brought Kevin Hefferon of Sodus and his 12-year-old daughter, Rose, to the Mass.

"We wanted to be a part of that," Hefferon said.

Beautiful was an adjective that many attendees used to describe the Mass.

"I’m so glad I came," said Patty Janiak of Webster. "It was just beautiful."

Father Alex Bradshaw, who is celebrating his 25th anniversary of ordination to the priesthood, said he was so glad to be able to attend the celebration on his own ordination anniversary. Father Bradshaw, who is pastor of Our Mother of Sorrows Parish in Greece, recently returned from traveling and studying in his native England as part of a six-month sabbatical.

He noted that several people had asked St. John Fisher in the weeks prior to his execution to reconsider his position and go along with Henry VIII.

"What does it profit priests if they gain the whole world and lose their soul?" Father Bradshaw said, pointing out that the saint was quoting Jesus.

The archbishop’s message of sacrifice resonated with Father William Graf, a professor at St. John Fisher College who is celebrating his 50th anniversary of ordination to the priesthood.

"He really hit the essence of what it means to be a priest in today’s society," Father Graf said of Archbishop Dolan’s homily.