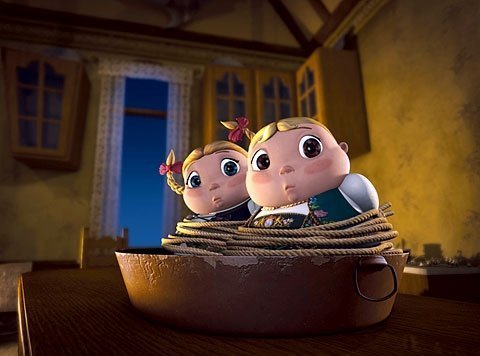 NEW YORK (CNS) — The same studio which brought us the best film of 2010, "The King’s Speech," now presents what will likely prove one of the worst of 2011: "Hoodwinked Too! Hood vs. Evil" (Weinstein).

Though objectionable elements are few, and mostly consist of childish potty jokes, viewers expecting Pixar– or DreamWorks-style enchantment — from this 3-D animated sequel to 2006’s "Hoodwinked!" are in for a big disappointment: The script is unoriginal, the production substandard, and the voices are as tired as the frequently clumsy action sequences.

Once again, things have gone awry in the fairy-tale world. Hansel and Gretel (voices of Bill Hader and Amy Poehler) have been kidnapped, and the prime suspect is Verushka the Witch (voice of Joan Cusack). This is clearly a job for the super-spies of the Happily Ever After Agency, led by the long-legged frog Nicky Flippers (voice of David Ogden Stiers).

A rescue mission is mounted, headed by Granny Puckett (voice of Glenn Close) and the Big Bad Wolf (voice of Patrick Warburton). Wolf is missing his partner, Red Riding Hood (voice of Hayden Panettiere), who is away receiving kung-fu training from the "Sisters of the Hood" — not nuns with martial arts skills, happily, but a group of enlightened high-kicking ladies who also bake.

Without Red, the mission is a failure, and Granny is captured. Verushka chains her to the stove, and demands that she whip up the world’s biggest weapon — a chocolate truffle (of all things) that renders the eater invincible. Granny, you see, is herself a Sister of the Hood and knows the recipe.

Red must be recalled to save the day. "Will the villains get their just desserts?" she asks. Does anyone care?

Directed by newcomer Mike Disa, "Hoodwinked Too! Hood vs. Evil" is a pastiche, freely stealing scenes and dialogue from films as varied as "Kung Fu Panda" and "Spider-Man" at one end of the spectrum and "Silence of the Lambs" at the other.

For no apparent reason, the script — co-written by Disa with Cory Edwards, Tony Leech and Todd Edwards — also displays an animus toward the Food Network and its celebrity chefs, with Verushka proclaiming, "Rachael Ray is the devil!"

Theologians take note. Or not.