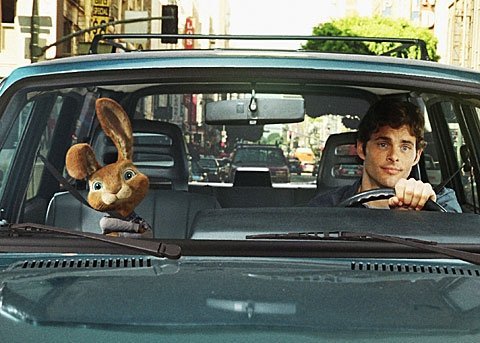 NEW YORK (CNS) — Prepare to fall into a sugar coma if you choose to swallow the empty cinematic calories of "Hop" (Universal), the story of an AWOL Easter bunny set against a kaleidoscope of every colorful confection imaginable.

While this comedy from director Tim Hill ("Alvin and the Chipmunks:) is generally — dare we say it — sweet, and its blend of live action and computer animation impressive, the script’s pun-filled and vaguely coarse humor is geared more toward adults, leaving this a not-so-tasty morsel for the younger set.

Where are the sweets made for all those Easter baskets, you wonder? Why, in a top-secret, Willy Wonka-like factory deep inside Easter Island, of course. Here bunnies labor beside chicks, while taste-testers shout orders like, "More marsh, less mallow!"

The refrain of the film’s throbbing theme song, "I Want Candy," by the way, will likely thrill theater concession-stand owners everywhere.)

Lording over it all, and dressed like Lewis Carroll’s White Rabbit, is the Easter Bunny (voice of Hugh Laurie). Bunny Senior is concerned, though, about his son and "hare" apparent, E.B. (voice of Russell Brand).

"You must pick up the Egg of Destiny and receive the magical powers of the Easter Bunny," Papa insists. But E.B. has his own dreams — he wants to be a rock star — and the thought of succeeding Dad fills him with dread.

We know E.B. is a special bunny because his, ahem, droppings are jelly beans (watermelon flavor, to be exact).

Bunnies quarrel, and E.B. goes rogue. He runs away to the place where dreams come true: namely, Hollywood. His first stop is the Playboy mansion where, as a cute bunny, he expects hospitality. He is not admitted.

E.B. is then hit by a car driven by aptly named human Fred O’Hare (James Marsden). Fred is also misunderstood and he, too, is running away from his relatives. But in Fred’s case that means house-sitting at a fabulous Beverly Hills mansion.

E.B. moves in with Fred, and what follows is a predictable round of errors and mistaken identities, as rabbit and human learn lessons about family and the need for reconciliation.

Sadly enough, though, "Hop" has nothing whatever to do with Easter itself, the real meaning of which is never so much as mentioned. Indeed, we’re told that the Easter Bunny has been making deliveries for 4,000 years — some two millennia before the Resurrection.

The only Christian reference occurs when the wicked chick Carlos (voice of Hank Azaria), intent on impressing the Easter Bunny with his egg-decorating skills, paints himself into Michelangelo’s Creation of Adam from the Sistine Chapel.

The Easter Bunny is not impressed.

The film contains some mildly rude humor. The Catholic News Service classification is A-II — adults and adolescents. The Motion Picture Association of America rating is PG — parental guidance suggested. Some material may not be suitable for children.