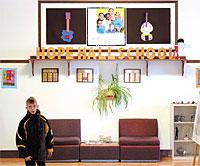 Brandon said he is looking forward to being a member of Hope Hall’s class of 2012, the school’s first-ever high-school graduating class.

“I think it’s great,” Brandon said of the expansion. “I didn’t really want to leave (after ninth grade), and I’m really excited to graduate from Hope Hall.”

Hope Hall is a private, nonprofit school that aims to help students who are at least two grade levels behind and who have been frustrated in traditional classrooms. Students may have attention deficit disorder, attention deficit hyperactivity disorder, auditory-processing delays, speech/language difficulties or learning difficulties, but their aptitude test scores do not qualify them for special education.

School officials broke ground Nov. 9 on a 9,900-square-foot expansion to the school’s Buffalo Road campus, which will mirror the school’s existing wing. Crews hope to finish the project by July, said Sister of St. Joseph Diana Dolce, the school’s founder and executive director/principal.

The addition will be accessible to those with disabilities, and it will include an elevator, allowing access to parts of the existing building that has stairs. Bathrooms in the current building also will be renovated to make them accessible, Sister Dolce said.

“Lots of our kids are being raised by grandparents who use walkers and canes, so we decided our project needs to be accessible,” Sister Dolce said.

Hope Hall officials noted that in addition to opening the doors to people of a variety of abilities, the school will offer students options. For example, students will have the option to earn either a state Regents high-school diploma or a Hope Hall local diploma.

“Now that everyone has to get a Regent diploma, (some students) are having a much more difficult time,” she said. “I believe some students give up because they can’t handle the rigors of Regents coursework.”

These tougher state standards have meant that some students left high school with no diploma at all, said Hope Hall’s Board President Dorothy Pecoraro, a parishioner of Brighton’s Our Lady Queen of Peace Church. Having a diploma will unlock doors for the school’s graduates, Pecoraro said.

“We are going to change their lives,” she stated.

To pay for the project, the school has begun a $4.5 million capital campaign. Of that amount, $2.5 million will go to the addition. The remainder will be used for program expenses to operate the high school for three years, Sister Dolce said. A foundation for the new high school also is being established to ensure that the school can continue to accept students in need.

Although tuition at the school is about $4,000 a year, the actual cost of educating students is about $12,500. Proceeds from fundraisers are used to cover the full cost of education and for scholarships for students in need. More than 85 percent of Hope Hall’s families are considered the working poor, said Debbie Diederich, the school’s development director.

In addition to fundraisers, volunteers help the school to keep costs down, said Sister Dolce, who noted that she has been amazed by the generous response to the school’s needs throughout its existence.

“Hope Hall has been the miracle of the loaves and the fishes over the last 15 years,” she remarked.

Brandon, who has been at the school for three years, noted that the school differs from others in the way teachers explain the material to students.

Teachers break down each part of the New York state curriculum into small pieces and present each piece in a multisensory way, Sister Dolce said. For instance, some students learning about the civil-rights movement took those lessons into their art class, where they have been making a life-sized replica of a segregation-era lunch counter.

Class sizes are small, and study skills and organizational skills are emphasized each day. In addition to academics, students are taught lessons in character, Sister Dolce said. Community meetings that take place each morning are key components of these character lessons.

“Kids learn, in terms of community, that they are responsible to and for each other and to and for the people beyond these walls,” Sister Dolce said. “Students take these things seriously. They have not always been in a position where they have felt that each person mattered.”

EDITOR’S NOTE: Details on Hope Hall and its capital campaign are available at www.hopehall.org.