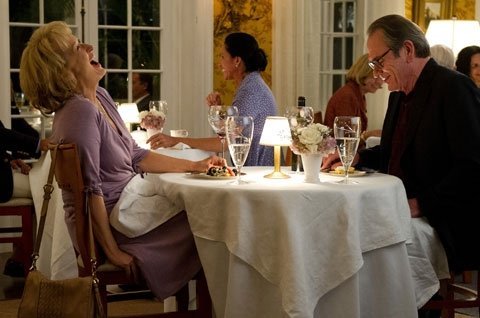 NEW YORK (CNS) — Although fundamentally moral, "Hope Springs" (Columbia) — a skillful mix of comedy and drama that focuses on the problems of one long-married couple — is also significantly flawed.

Primarily, that’s because the frankness with which director David Frankel’s film approaches marital intimacy veers, at times, into intrusiveness. Additionally, in keeping with the under-refined values of contemporary society, his picture implies that virtually all methods of obtaining sexual gratification — at least between married partners — are acceptable.

While grumpy Arnold seems resigned to this fate, feisty Kay is unwilling to give up so easily. So, at her insistence, the pair sets off to Maine for a week of intensive therapy with marriage counselor and self-help author Dr. Bernard Feld (Steve Carell).

Even discussing their personal problems — much less solving them — proves a challenge for the buttoned-up duo. Much of the humor plays off the contrast between their verbal and behavioral inhibitions and Feld’s unflappable straightforwardness on any and all subjects.

Yet, as he peers into every aspect of their history, as well as their unfulfilled desires and fantasies, viewers need not be puritans to share in Kay and Arnold’s discomfiture. And things go from bad to worse when we’re subjected to a brief but unseemly scene in which Kay resorts to a sinful alternative to the physical union she and Arnold no longer share. While her act is portrayed as a pathetic symptom of desperation, this interlude marks the movie’s low point of unnecessary immodesty.

Thus, while "Hope Springs" celebrates determined fidelity, and finds its leads in top form, the proportion of screenwriter Vanessa Taylor’s script devoted to talk about, or activity in, the bedroom narrows the appropriate audience for this keenly observed study. Only mature moviegoers well formed in faith and morals will be up to the task of gleaning its virtues from its failings.