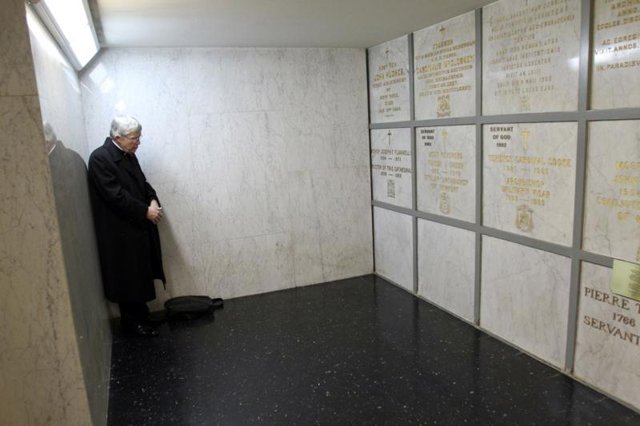 Father Charles P. Connor prays before the tomb of Archbishop Fulton J. Sheen in the crypt of St. Patrick's Cathedral in New York in this 2009 photo.
By Tom Dermody
Catholic News Service
PEORIA, Ill. (CNS) — Hopes buoyed in the Diocese of Peoria by a Nov. 17 court ruling allowing Archbishop Fulton J. Sheen’s family to transfer the sainthood candidate’s remains from New York to Peoria were tempered by an emergency stay being granted to the Archdiocese of New York, which planned to appeal the ruling.
In a 10-page decision, Manhattan Supreme Court Justice Arlene Bluth had granted the request of Archbishop Sheen’s niece, Joan Sheen Cunningham, to have the remains of the famed orator and media pioneer removed from St. Patrick’s Cathedral in New York and transferred to St. Mary’s Cathedral in Peoria, where a crypt is being prepared for his re-interment.
However, five days later, lawyers representing the Archdiocese of New York and the trustees of St. Patrick’s Cathedral — who oppose the relocation of the remains — announced their intention to appeal Bluth’s ruling. They also sought and were granted the stay.
In a statement provided to Catholic New York, newspaper of the New York Archdiocese, attorney John M. Callagy said: "We are confident that we will present substantial reasons for the appeals court to overturn the initial decision."
In announcing her decision, Bluth wrote that "the petitioner has set forth a justifiable, good, and substantial reason for moving the remains." Among the reasons cited for disinterment is that the move will aid in the canonization process; that Archbishop Sheen’s parents are buried nearby in Peoria; and that St. Mary’s Cathedral is where Archbishop Sheen was ordained a priest and a place he visited often during his lifetime.
The Diocese of Peoria, which has been a promoter of Archbishop Sheen’s canonization cause for more than 14 years, expressed joy at the ruling and pledged "to begin working with the Archdiocese of New York to make this process happen as soon as possible."
Patricia Gibson, chancellor of the Diocese of Peoria, called the decision to appeal disappointing, but expressed the hope the stay would be rejected at a hearing that could occur soon. If that happened, she said, it is possible Archbishop Sheen’s remains may be present for Christmas Masses at St. Mary’s Cathedral.
Archbishop Sheen, who won the 1951 Emmy for outstanding television personality for his show "Life Is Worth Living," was born in the Woodford County community of El Paso on May 8, 1885, and moved with his family to Peoria so that he and his brothers could attend St. Mary Cathedral Grade School and Spalding Institute. He was ordained to the priesthood in the cathedral on Sept. 20, 1919.
After brief priestly ministry in Peoria he would go on to serve on the faculty of The Catholic University of America in Washington for nearly 30 years and was national director of the Propagation of the Faith from 1950 to 1966.
A former auxiliary bishop of the New York Archdiocese, he was bishop of Rochester, New York, from 1966 to 1969 and was given the personal title of archbishop when he retired from that diocesan post. He is the author of dozens of books, including his autobiography: "Treasure in Clay."
Archbishop Sheen died Dec. 9, 1979.
In 2000, the Archbishop Sheen Foundation was officially organized and two years later, Bishop Daniel R. Jenky of Peoria petitioned the Vatican to open the canonization process.
Archbishop Sheen’s heroic virtue and life of sanctity were recognized in 2012 by Pope Benedict XVI, who granted him the title "Venerable." The Diocese of Peoria has said that, with progress already made in the cause and pending the approval of Pope Francis, a beatification could be celebrated in the near future after the arrival of the remains at St. Mary’s Cathedral.
– – –
Dermody is editor of The Catholic Post, newspaper of the Diocese of Peoria.
Copyright © 2022 Catholic News Service, Inc. All rights reserved. Linking is encouraged, but republishing or redistributing, including by framing or similar means, without the publisher's prior written permission is prohibited.