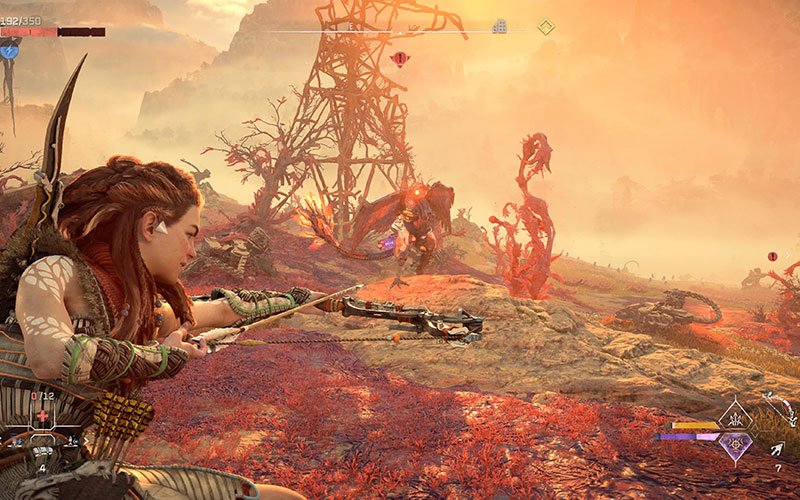 This is a scene from the video game "Horizon Forbidden West." (CNS photo courtesy Sony)

While this second installment in the post-apocalyptic series features a courageous and honorable heroine, her backstory includes elements incompatible with Christian ethics.

The plot continues the adventures of Aloy (voice of Ashly Burch), a young hunter leading a band of companions in the 31st century across what used to be the western United States. They’re out to discover both the cause of, and the cure for, a plague that has ravaged their world, killing everything it touches.

Aloy strives to be upright. She engages in warfare out of necessity to protect herself and others, but actively seeks to reduce conflict among the remnants of surviving humanity.

Along with primitive armaments — bows, slings and spears — Aloy wields more advanced weapons that are a legacy of the Old Ones, a technologically accomplished race capable of producing artificial intelligence as well as powerful machines. They also created the mechanical animals who continue to roam the wild and can be hunted for spare parts or tamed.

A thousand years earlier, the Old Ones, facing extinction due to their mistakes, resorted to human cloning in a last-ditch effort to repopulate the earth. And, in fact, as explained in this title’s 2017 predecessor, “Horizon Zero Dawn,” Aloy is herself the clone of a long-dead scientist.

The narrative makes it clear that the actions of the Old Ones were wrong. But, given that the game’s heroic protagonist is the product of unethical scientific endeavor, youthful players might be left confused.

Well-catechized teens, however, will likely be able to sort through the story line’s positive and negative ingredients. As for the combat in which Aloy engages, it’s never graphic, though some gore is seen in puffs of red mist. Off-limits for kids, and safest for grown-ups, “Horizon Forbidden West” is possibly acceptable for older adolescents.