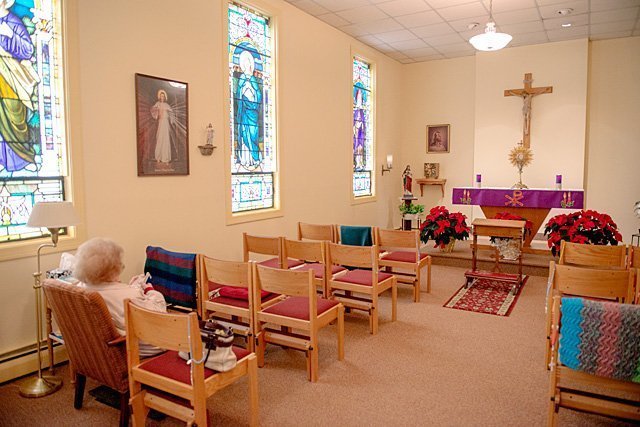 Angela Nasca sits in the perpetual adoration chapel at St. Ann in Hornell.

HORNELL — Over the past 15 years, Isabel Nobilski has maintained a weekly one-hour ritual at a time most of us are asleep — from 2 to 3 a.m. each Tuesday. Also since 2001, Donna Kull has been equally dedicated to her Sunday slot of 7 to 8 a.m.

What might spur this level of commitment during hours that are generally considered inconvenient? For Nobilski and Kull, it’s the opportunity to connect with Christ in the most intimate of settings.

Those special moments take place in the perpetual-adoration chapel hosted by St. Ann Church in Hornell, which on Feb. 4 marked the 15th anniversary of its opening.

Located in the nuns’ chapel of the former St. Ann School, the perpetual-adoration facility was created through the efforts of two St. Ann parishioners: Eugene Ludden, who died in 2004, and Cyndi Hornbeck. Both prayed the Divine Mercy chaplet for the intention of seeing a perpetual-adoration chapel, and in early 2001 their prayers were answered.

Although the chapel has seating for more than 30 people, it typically contains no more than a small handful of folks at any given time. In keeping with the perpetual nature of this devotion, at least one person is always on hand to engage in eucharistic adoration or other forms of silent prayer.

This is done in the presence of a monstrance placed on an altar. Being able to see the host displayed while praying, Kull said, makes for a unique experience.

"You’re sitting right there in front of our Lord," Kull said. "When he’s exposed right in front of you, it’s a special time. It’s quite amazing."

"You can’t get any better than that. It’s powerful," Nobilski agreed, adding that people can’t fully appreciate the impact of adoration until they try engaging in it: "Once they’re there, they get it."

St. Ann’s is one of two perpetual-adoration chapels currently operating in diocesan Southern Tier parishes; the other has existed since 1992 at St. Casimir Church in Elmira. Nobilski coordinates the scheduling of one-hour slots at St. Ann, with Kull assisting. Both are longtime communicants of St. Ann Church, which is a part of Steuben County’s Our Lady of the Valley Parish along with St. Mary Church in Rexville.

Nobilski draws from a list of more than 200 people, including substitutes, for the 168 adoration hours to be covered each week. The schedule is displayed near the chapel’s entrance alongside listings of special prayer intentions and deceased parishioners for whom to pray. With the help of notices in the parish bulletin for the occasional adoration slot that opens up, Nobilski said that all 24 hours on all seven days of the week are typically covered successfully.

"I’ve said from the beginning that God wants this chapel here," she remarked. 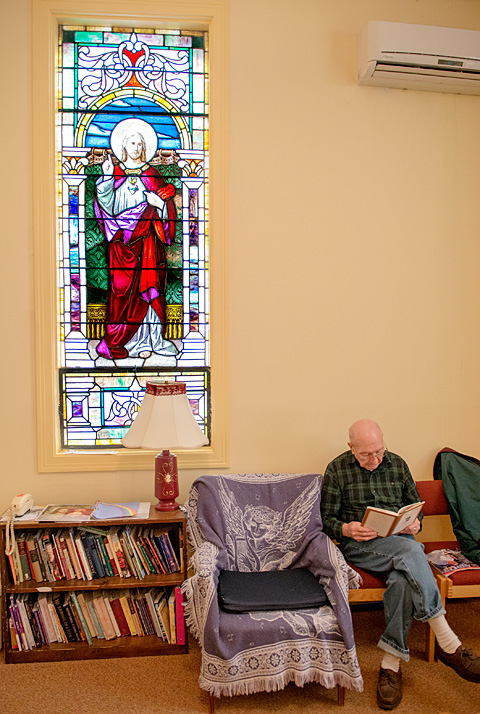 Charles Brewer reads a book at the perpetual adoration chapel at St. Ann in Hornell.

Nobilski and Kull noted that adorers come from several surrounding communities as well as Hornell. Many do not drive but still manage to get to St. Ann by bus or arranging for rides; there also is a reliable contingent of young people to help fill the schedule. Married couples and small groups occasionally pray for one-hour stretches, but by and large the times are covered by individuals.

"It’s the one-on-one thing. When you’re there and by yourself, that makes it even more powerful," Kull remarked, adding that some adorers come for at least two hours. "One hour almost goes too fast."

Nobilski said some people hesitate to make a regular weekly commitment, unsure they can maintain it, but she reassures them that substitutes are in ample supply for when schedule conflicts arise. In addition, hours can be shared and others only need to be covered once every few weeks. Yet she added that a high percentage of the adorers — herself and Kull included — have ended up making their weekly hour a top priority over many years, leading to a strong sense of community among the fleet of "regulars."

The chapel also has a fair share of people dropping in for unscheduled visits — even some non-Catholics — who simply wish to spend some time in prayer.

"It gets them away from the hubbub of that busy day or night," Nobilski said.

Regardless of the circumstance or time of day, Nobilski asserted that one common denominator exists for those who frequent the perpetual-adoration chapel.

"It’s very satisfying. When you walk out, you know you’ve been refreshed and you know God is right there walking alongside of you," she said.