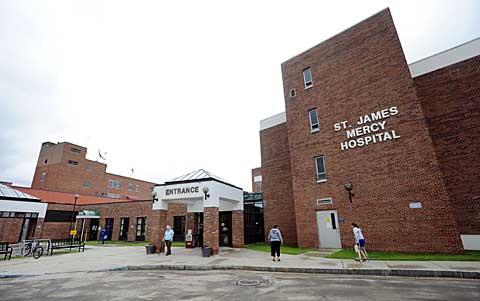 St. James Mercy Hospital in Hornell (above) announced that it has cut the equivalent of 20 full-time positions and also implemented benefits reductions.

"St. James Mercy Hospital and other health-care organizations across the state continue to face serious financial challenges due to the weak economy, declining state funding and decreasing reimbursement," Mary LaRowe, president/CEO of St. James Mercy Health System, said in a statement. She added that other hospitals in New York state have taken similar measures as St. James Mercy.

LaRowe observed that the past two years have been particularly challenging, noting that "several regional employers have closed or downsized, further weakening the economy and resulting in declining hospital revenues."

In addition, St. James Mercy is temporarily closing its blood-drawing station on Elm Street, effective July 26. This move is in response to reduced patient volumes and declining revenue, according to Nancy Khork, vice president of performance improvement. Laboratory services will continue to be offered at the hospital’s main campus on Canisteo Street seven days a week (Monday through Friday, 7 a.m. to 8 p.m.; and Saturday and Sunday, 7:30 a.m. to 3:30 p.m.).

LaRowe noted that St. James Mercy’s financial outlook stands to improve, should a potential partnership come about with Guthrie Health System in Sayre, Pa. Hospital officials anticipate a clearer picture of that partnership — which is currently in the exploratory stages — by the late summer or early fall of 2010.

St. James Mercy is one of only two Catholic hospitals in the Rochester Diocese; the other is St. Joseph’s Hospital in Elmira.