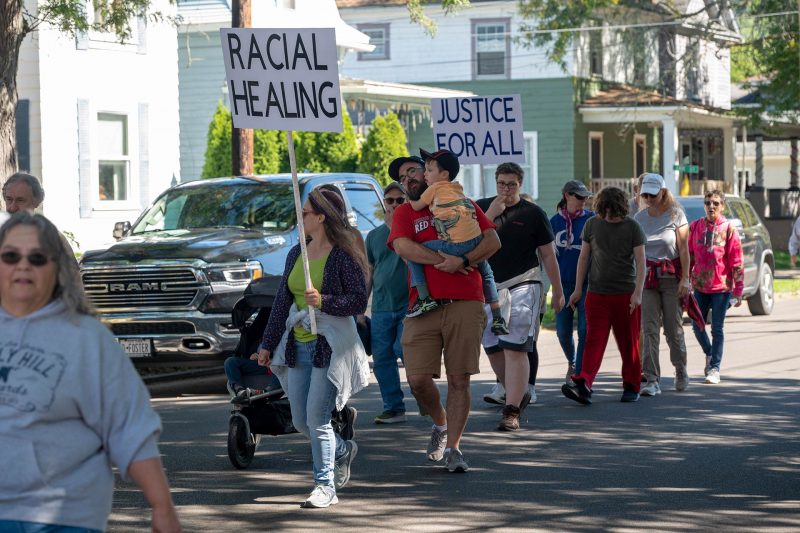 Signs bearing those words were carried through the city’s streets Sept. 24, offering an emphatic local response to actions that conveyed a very contrary message.

More than 100 people gathered outside Rehoboth Deliverance Ministries on East Avenue, where a public event to promote racial and religious healing began at 1 p.m. Participants then paraded a mile to St. Ann Church on Erie Ave., and a couple of more blocks to Temple Beth-El on Church Street where the march concluded.

At each stop — worship sites representing African-American, Catholic and Jewish congregations, respectively — speakers called for continued opposition to hatred and intolerance. The march was organized by local churches, including Our Lady of the Valley Parish, of which St. Ann is a part.

Serving as the impetus for the rally was a disturbing occurrence July 9-10, during which pamphlets and stickers bearing swastikas and racial epithets were found at a number of public and private properties around town, including St. Ann Church. According to the Hornell Police Department, three people were subsequently arrested. Still, the perpetrators’ actions have had a lasting effect on the community, said Stephen Hoyt, a rally participant.

“It’s got a lot of people upset,” remarked Hoyt, an Our Lady of the Valley parishioner.

The nearly two-hour rally Sept. 24 featured group prayer and music at each stop. In addition, speakers stood in front of the three local churches urging sustained actions of peace, compassion, tolerance and harmony.

A statement — signed Aug. 16 by leaders from 10 area worship communities, including Father Stanley Kacprzak, pastor of Our Lady of the Valley — was read aloud at Rehoboth, St. Ann and Temple Beth-El. The statement asserted that the hate literature spread around Hornell over the summer “violates every standard of decency according to which each of us in our community should treat one another.”

“These actions are not OK,” the statement added. “It is not OK for us to turn a blind eye or be silent when we encounter such things. We do not look away. Rather, we join together and take a stand against hatred, bigotry, bullying and intimidation.”

Speakers on Sept. 24 also recalled examples of extreme violence stemming from racial and religious hatred. They noted that 10 people — all African-Americans — were killed May 14 in a racially motivated shooting at a Buffalo supermarket, and that 11 other people were gunned down in October 2018 in an anti-Semitic attack during services at a Pittsburgh synagogue.

Hoyt, while saying he’s glad the Sept. 24 rally in Hornell took place — “I guess it was needed” — contended that there’s a long way to go toward completely erasing racial and religious hatred, noting the large number of online groups that continue to spread such sentiments.

Along with the focus on community good will in Steuben County, a recent event in Tompkins County aimed to spread a similar sense of harmony.

St. Catherine of Siena Parish hosted the Ithaca Peace Festival Sept. 16-18. Those in attendance enjoyed an array of local musical performances, children’s games and activities, a variety of international food and a silent auction.

“The festival went great,” remarked Kristy Colbert, who served as organizer along with Maura and Frank Fetsko. She noted that the three-day event — typically held annually — was blessed by good weather and strong attendance as it returned from a two-year absence due to the coronavirus pandemic.

“We enjoy welcoming other faith communities onto our campus and have developed strong relationships within the local Muslim, Jewish and Tibetan communities because of the festival,” she said.

Tags: Steuben County News, Tompkins County News
Copyright © 2022 Catholic Courier, Inc. All rights reserved. Linking is encouraged, but republishing or redistributing, including by framing or similar means, without the publisher's prior written permission is prohibited.