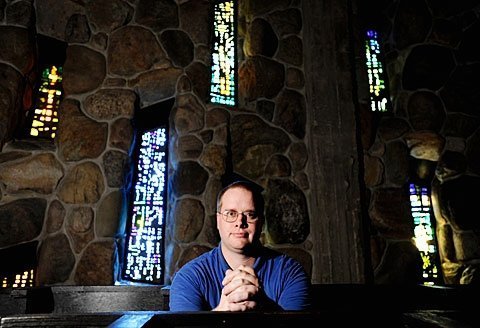 Tom Flansburg, a parishioner of Hornell’s St. Ann Church, entered the Abbey of the Genesee in Piffard, Livingston County, in early July. Above, he poses inside the abbey’s chapel June 15.

PIFFARD — A metal railing cuts through the center of the Abbey of the Genesee chapel. Monks congregate several times per day on one side; the public joins them in prayer on the other. Signs on the end aisles proclaiming "Cloister — No Entry" reinforce the sense of separation.

These borders also mark a profound division in lifestyle — between people who live as they choose, and those who devote themselves literally around the clock to a set schedule of prayer and work.

Beginning July 8, Tom Flansburg has crossed to the other side — and he’s looking forward to his new way of living.

"For the most part I’m feeling pretty good," Flansburg said in an interview June 15. Three days earlier, a reception was held in his honor by his native Our Lady of the Valley Parish in Hornell. For many well-wishers, it was perhaps one of the last times they’d see him in town due to his new, potentially lifelong affiliation with the cloistered Cistercians of the Strict Observance.

Flansburg has joined the Trappist order as a postulant, the first step in becoming a monk. This marks a new life path for the 31-year-old, the second-oldest of Chuck and MaryAnn Flansburg’s six children. He studied criminal justice in high school, spent a brief time in the United States Army, then worked in more recent years for a taxi/limousine service, a video store and a hardware store.

"I’ve never been satisfied with whatever job I’ve had. I always wanted to do something better or different," he remarked.

The road to the abbey began approximately four years ago when Flansburg attended a retreat at Notre Dame Retreat House in Canandaigua. After conversing there with Redemptorist Father Paul Miller, he followed through on the priest’s suggestion to explore religious life.

He resided at Abbey of the Genesee as an observer from Jan. 3 to Feb. 5 of this year, working alongside Trappist brothers and priests making their famous Monks’ Bread and taking part in daily prayer life. These prayers, known as Divine Office, take place seven times per day beginning at 2:25 a.m. and ending at 7 p.m. Flansburg admitted that this schedule threw him for a loop in the early going, particularly the earlier slots.

"I find getting up at 2 o’clock in the morning difficult," he said with a laugh. "The first day it was, ‘What am I thinking? I can’t do this! Do I really want to do this the rest of my life?’ It’s a bit surreal at first, once you’re across the (metal) bar. But after a couple of days, you feel a part of the family more or less."

Though they’re better known publicly for their bread-making, the Trappists are a special group to Flansburg based on their devotion to offering intentions for people in need.

"They provide a lot of prayers for the world," he said.

Flansburg is just starting out on the lengthy journey required to become a monk. Following a postulancy of no fewer than six months, he would then become a novice for at least two years before professing his first vows and reaching the level of junior professed. From there, at least three additional years are required before making solemn profession as a monk.

Flansburg said he based his selection of a religious order, in part, on where he deemed manpower was most needed. In the case of Abbey of the Genesee — located just outside of Geneseo near the Genesee River in Livingston County — he said new membership has been scant in recent decades.

"This place has a huge dilemma. They do important works, but almost all the monks are at least in their 60s," he said.

Yet Flansburg didn’t join the Trappists strictly out of a sense of duty. He said he also feels comfortable in his humble surroundings: "I like the simplicity and it’s a very simple life. I’ve always been a fan of simplicity; I don’t care for the technology race and the next (new) computer."

On the other hand, with simplicity comes several profound adjustments based on cloister regulations: the rigid daily schedule; inability to leave abbey grounds except in exceptional circumstances, scant access to technology; few visits from family.

As a postulant, Flansburg has not yet made a lifelong commitment since he has not taken vows. But at this early juncture, Flansburg is willing to adapt to a new lifestyle in order to deepen his relationship with the Trappists and his Lord — to "clear this hurdle of life and see if that’s what God wants," as he puts it.

"It’s a necessary experience. Without any challenges, I can’t grow as a person," he explained.