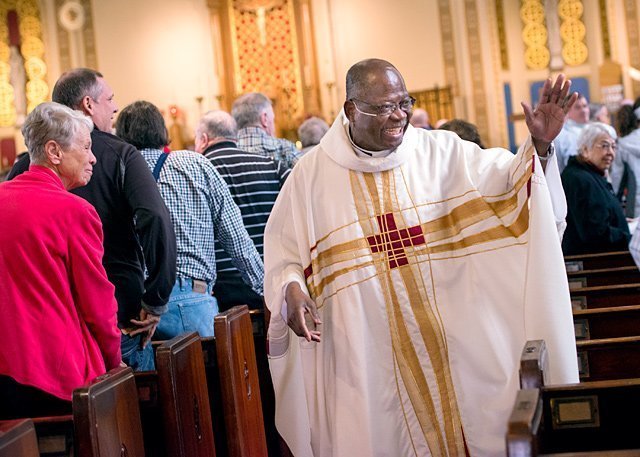 For the people of Our Lady of the Valley Parish, May 14 was both a memorable and emotional day.

There was joy as Bishop Salvatore R. Matano administered the sacrament of confirmation to eight young parishioners while presiding at the 10:30 a.m. Mass at St. Ann Church in Hornell.

However, the day also was tinged with sadness, as it marked the final Sunday at Our Lady of the Valley for Father Peter Anglaaere, the parish’s pastor for nearly nine years.

Four days after the confirmation Mass, Father Anglaaere — who spent 12 years overall in the Diocese of Rochester — returned home to his native Ghana. He is being replaced at Our Lady of the Valley by Father Stan Kacprzak, currently the pastor at St. Benedict Parish in Canandaigua and East Bloomfield, effective June 27.

“Father Peter has been a true gift from God to us,” commented Amy Mikolajczyk, Our Lady of the Valley’s folk-group director. She lauded Father Anglaaere for “his love for our parish family, infectious laughter and constant care and concern for everyone.”

Father Anglaaere, 60, was ordained July 25, 1986, as a priest of the Archdiocese of Tamale, Ghana. There, he served in such roles as parish pastor/administrator, school principal, secretary to the archbishop, archdiocesan director of justice and peace and religious education, director and coordinator of pastoral year seminarians, and director of the archdiocesan Center for Pastoral Formation.

He arrived in the Rochester Diocese in 2005 as an extern priest, first serving for one year as sacramental minister at Ithaca’s St. Catherine of Siena Parish and for two years in the same role at St. John Vianney Parish (St. Mary, Bath/St. Gabriel, Hammondsport).

In 2008 Father Anglaaere became pastor of Our Lady of the Valley, which comprises St. Mary in Rexville as well as St. Ann. He remained in that position until his recent move back to the Tamale Archdiocese, which is led by his uncle, Archbishop Philip Naameh. Father Anglaaere told the Catholic Courier that he is “still discerning” about the ministerial roles he will assume going forward.

To note his time at Our Lady of the Valley, Father Anglaaere was honored April 30 during the 10:30 a.m. Mass at St. Ann Church followed by a reception at The Main Place in Hornell. At the Mass Father Anglaaere thanked the congregation “for your presence in my life — sharing your time, your families, your resources.”

Also during the liturgy, Deacon Mark Clark included a touching tribute to Father Anglaaere in his homily.

“I want to thank you for the wisdom that you often shared with me — for your friendship, for your love. I’m proud to call you my priest, my friend, my brother,” Deacon Clark told Father Anglaaere.

Another going-away event for the priest occurred April 22 at St. Mary Church in Bath, where he celebrated the 4 p.m. Mass and was the guest of honor at a dinner that followed in the parish hall.

“Father Peter Anglaaere is one of the most spiritually grounded priest that I have ever met. Whenever I have been with Father Peter I have felt his love for God and his willingness to share God’s love with everyone that he meets,” remarked Deacon David LaFortune, pastoral administrator of St. John Vianney. “I will personally miss his beautiful smile and his infectious laugh. He will be greatly missed. My prayer for Father Peter is that God will continue to shower him with his presence as he brings God’s love to the people of Ghana.”

“We are very sad he is leaving us, but excited for his future,” Mikolajczyk added. “He is dearly loved and will be sorely missed.”