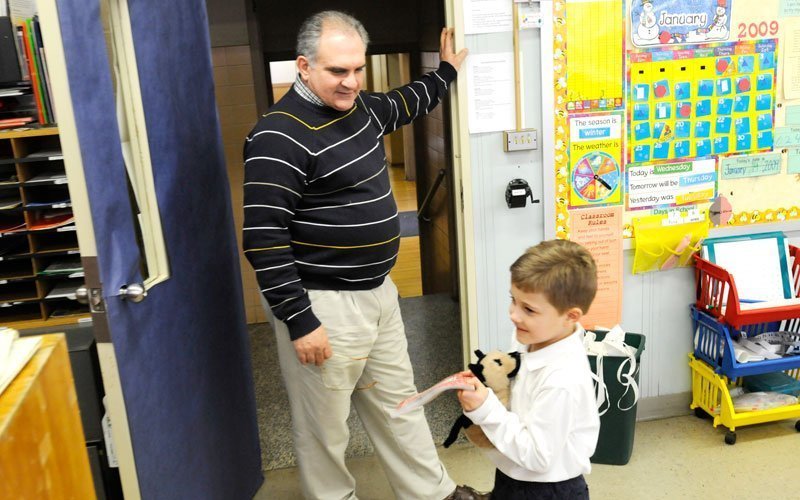 Richard Barone, principal of St. Ann School in Hornell, checks in with some of the first-graders Jan. 15.

Richard Barone is only too happy to list the intangibles offered by St. Ann School: high academic standards; a proud history in Hornell extending nearly 150 years; a close-knit, faith-filled family atmosphere; and state-of-the-art technology in the classrooms.

“Certainly in religious schools, you can’t exist unless your bottom line is reading the way it is supposed to read,” he said. “All religious schools go through this. It’s a roller-coaster ride; there are periods of time when your income doesn’t match your invoices.”

To set a pace more befitting of a carousel than a roller coaster, St. Ann employs several creative approaches to offset the costs of such expenses as tuition and equipment. Beginning this school year, for instance, families are using gift-card and catalog programs designed to hold tuition at the same level as in 2007-08. Tuition for 2008-09 is $2,175 for a single student from a contributing parish.

“The thinking is trying to give parents some fundraising options that target their normal spending. We’ve done quite well with that,” Barone said, adding that a number of families have “substantially” reduced their tuition bills through this approach.

St. Ann also counts on the community at large for financial support, offering such initiatives as a $2,500 adopt-a-student program as well as sponsorships for field trips ($750 each), classroom computers ($1,000), SMART Boards ($2,000) and technology labs ($7,500). Endowment-fund gifts, beginning at $25,000, mark the high end of these donor options.

Barone said these pricier forms of charitable giving are aimed chiefly at area businesses. He added that the school is expanding its Proud Sponsor Program, by which local merchants receive links on the school’s Web site in exchange for donations.

“They have provided a service for St. Ann’s. We in turn have reciprocated,” he said.

Barone also lauded the support provided by the school’s alumni association, which raises approximately $10,000 a year; and Our Lady of the Valley Parish as a whole, which devotes 33 percent of its regular Sunday collections toward subsidizing the school. The principal added that St. Ann is backed strongly by Father Peter Anglaaere, first-year pastor of Our Lady of the Valley.

“Our parish very much looks at St. Ann School as a mission, an important mission. In developing our Catholic leaders of the future, they know how important Catholic education is,” Barone said.

Barone extended considerable credit to Sister Dolores Ann Stein, RSM, the longtime St. Ann principal, noting that she worked hard on starting and enhancing fundraising efforts in the years prior to her 2007 retirement.

“Sister is really the main architect in laying the foundation,” he said.

St. Ann currently has an enrollment of 100 students in grades prekindergarten through 8. The school serves a wide geographic area, its radius having increased since the closing last June of Dansville’s Holy Family School. The next-closest Catholic schools in this diocese are All Saints, Corning, and St. Agnes, Avon, each about 50 miles away.

Jim Flansburg, parish business manager, said the best way the school can thank its donors is by striving to be the best it can be.

“The real bottom line at St. Ann School is the quality of education they can deliver. It has to be more than just the sum total of that money given,” Flansburg said. “There is a synergy here. Everybody works together to make this a better school. Some of that stuff you would never see if you were looking at the revenue sheets or the expenditures.”