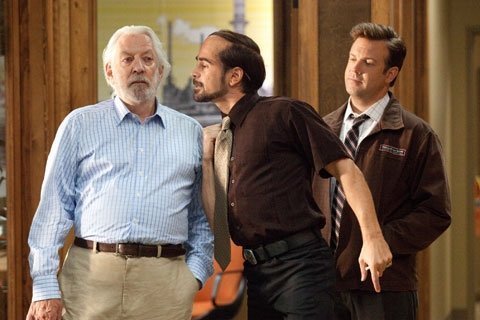 NEW YORK (CNS) — "Death," runs a Russian aphorism, "solves all problems; no man, no problem." This cynical saying, often attributed — plausibly, if not factually — to Soviet dictator Joseph Stalin, finds an echo (albeit a supposedly humorous one) in the plot of the mean-spirited, frequently sordid comedy "Horrible Bosses" (Warner Bros.).

Exasperated by the varied misbehaviors of their respective supervisors, but fearful of quitting their jobs amid the current economic downturn, three friends — played by Jason Bateman, Charlie Day and Jason Sudeikis — plot to eliminate their irksome employers the old-fashioned way: by murdering them.

What drives these normally law-abiding pals to such a desperate pass? Industrial executive Nick (Bateman) is perpetually being browbeaten and exploited by his intimidating superior Dave (Kevin Spacey).

The chemical manufacturing company for which Kurt (Sudeikis) works as an accountant is being run into the ground by the egotistical, cocaine-addicted heir (Colin Farrell) of its recently deceased — and thoroughly sympathetic — founder (Donald Sutherland).

And, much to the amusement of his amigos, dental hygienist Dale (Day) is the victim of unrelenting sexual harassment by Julia (Jennifer Aniston), the nymphomaniacal tooth doctor who signs his paychecks.

Of course, much of the humor in what follows focuses on this fundamentally decent trio’s inept attempts to execute their outlandish scheme, during the later stages of which they are shown to experience some appropriate moral qualms.

But director Seth Gordon’s film treats wayward sexuality as fodder for laughs. In addition to Julia’s insatiable appetite, elements so trivialized include the hedonistic doings of Farrell’s character and the activities of two incidental figures, each of whom makes a living catering to aberrant desires.

As for the dialogue in the script by Michael Markowitz, John Francis Daley and Jonathan Goldstein, it’s riddled with ribaldry.