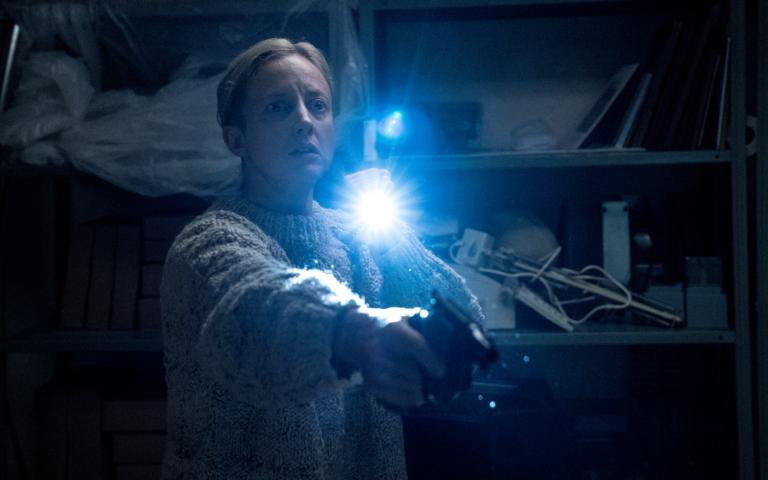 Andrea Riseborough in a scene from the movie "The Grudge." (CNS photo by Sony Pictures)

NEW YORK (CNS) — The drab horror tale “The Grudge” (Screen Gems) has a complex history and a complicated structure. But the upshot for viewers is a simple one: Failing skillfully to interweave his various narratives, writer-director Nicolas Pesce bids for audience attention with ever bloodier deaths and ever more hideous sights.

Pesce’s film is the second English-language remake of a hit 2003 Japanese horror tale about a haunted house whose malign influence infects and follows all who enter it. Both previous versions were helmed by Takashi Shimizu.

This time out, the most prominent of the dwelling’s ensemble of victims is recently widowed police officer Detective Muldoon (Andrea Riseborough). As she and her troubled partner, Detective Goodman (Demian Bichir), investigate the death of Lorna Moody (Jacki Weaver), a specialist in assisted suicide, the stories of others accursed by the structure are traced.

There are matters good and bad of which moviegoers of faith might take note. A subplot involving medical complications in Nina’s pregnancy, for instance, leads to a discussion between the spouses behind which lurks the unspoken possibility of doing away with the baby.

Goodman’s mourning for his lately deceased mom involves holding on to the Catholic items, a rosary and prayer cards among them, that remind him of her. And things get spiritually dicey as it’s revealed that the Mathesons have deliberately moved to their jinxed home hoping that, once failing Faith goes to the great beyond, she can return to keep William company in the guise of a ghost.

Overwhelming all this, however, is Pesce’s mounting resort to carnage. This culminates with the suicide of a character whose jump from a high floor transforms her into an exploding blood bomb.

The film contains excessive gory violence, gruesome images, mature themes, including the implicit possibility of an abortion, a couple of profanities, at least one milder oath as well as a few rough and several crude terms. The Catholic News Service classification is O — morally offensive. The Motion Picture Association rating is R — restricted. Under 17 requires accompanying parent or adult guardian.