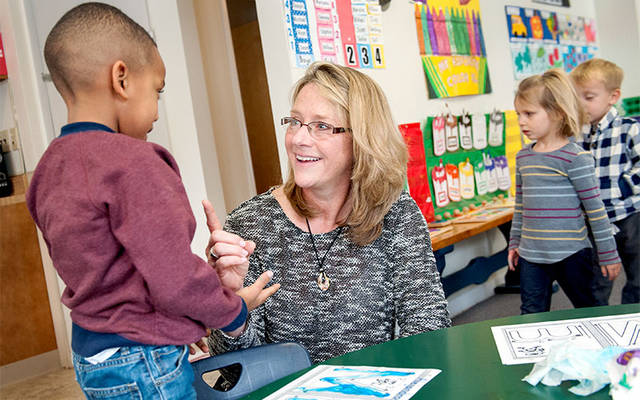 Jean Yorio visits with prekindergartners in January 2016 during her first year as principal of St. Mary Our Mother School in Horseheads. As of Aug. 1, Yorio also began serving in the same capacity at Elmira’s Holy Family School. (File photo)

As a new school year begins, Jean Yorio finds herself with a substantially expanded job territory.

She not only remains the principal of St. Mary Our Mother School in Horseheads, but as of Aug. 1, she is serving in the same capacity at Elmira’s Holy Family School.

Yorio becomes the first principal to be leading multiple diocesan schools simultaneously. Anthony S. Cook III, diocesan superintendent of schools, said he approached Yorio about the dual principal’s position near the end of the 2017-18 school year upon learning that Lorie Brink, principal of Holy Family from 2011-18, had opted to return to the classroom this fall.

Cook noted that he sought out Yorio based on Holy Family’s proximity to St. Mary Our Mother — the two schools are approximately seven miles apart — and his belief that “Jean has just built such an excellent reputation” in her three years at the helm of St. Mary Our Mother.

“Any time you have a leadership change, the selection of who the new leader will be is so important to the future direction of the school,” Cook said. “Jean has impeccable character, is reliable and trustworthy, and is great with the staff, parents and children.”

Cook added that in speaking with the parish pastors where the prekindergarten-through-grade-6 schools are located — Father Scott Kubinski of Elmira’s Most Holy Name of Jesus and Father Christopher Linsler of St. Mary Our Mother — “we determined that utilizing Jean in this dual capacity would really strengthen the schools and help with some of the collective marketing efforts in the region.” While acknowledging that such a leadership model is rare for school principals, Cook pointed out that many pastors in the Diocese of Rochester successfully oversee two or more churches.

Yorio said she was initially hesitant about taking on added responsibilities, but grew to embrace the model after learning that an assistant principal will be in place at each school when she is not present. The assistants are Kelley Roe, an academic intervention support teacher at St. Mary Our Mother; and Don Eckerson, a sixth-grade instructor at Holy Family. Both assistant principals will continue their teaching positions as well.

“I am thrilled with both of these candidates and was so grateful when they accepted that opportunity,” Yorio said. “It’s a comfort to know there’s a person in each building who can support student, parent and staff needs on a day-to-day basis. There’s not a day that the buildings are not going to be supported administratively.”

With full-time duties now divided among two schools, Yorio said she plans to split her time as evenly as possible between Holy Family and St. Mary Our Mother although “there are going to be weeks I may have to have a concentration at one school over another.”

Yorio emphasized that she is treating each school equally when it comes to marketing, saying that “I’ve never felt our (two) schools to be in competition with each other. They are uniquely and very, very wonderfully different; I think each school has a very clear personality.” Her biggest priority, she said, is to draw more families toward Catholic education in general regardless of where that takes place.

Yorio has served as principal of St. Mary Our Mother since 2015. She previously taught in the Dundee Central School District from 1986-91, and was then a teacher and preschool director in the Horseheads School District from 1997-2003 and 2008-15. She earned her bachelor’s degree in elementary education from Alfred University, master’s in early childhood education from SUNY Geneseo and certification in educational administration from SUNY Brockport.

Tags: Catholic Schools, Chemung County News
Copyright © 2023 Rochester Catholic Press Association, Inc. All rights reserved. Linking is encouraged, but republishing or redistributing, including by framing or similar means, without the publisher's prior written permission is prohibited.