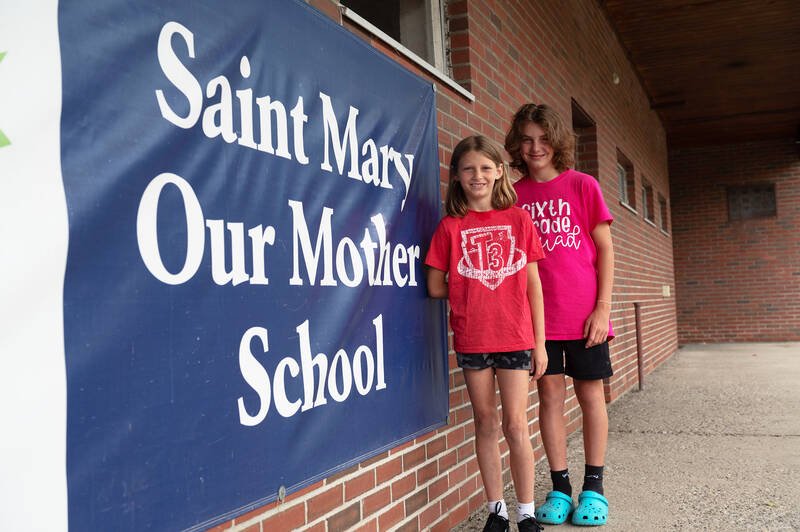 Bailey McCarthy (left) and her brother, Keenan, are the two youngest of the four McCarthy children to attend St. Mary Our Mother School. Their father, Brendan, died of ALS in 2015. (Courier photo by Jeff Witherow)

HORSEHEADS — One by one, Keenan McCarthy’s fellow sixth-graders bade him heartfelt goodbyes June 23 as they wrapped up their final day at St. Mary Our Mother School.

Such poignant gestures are common when the McCarthys are involved, thanks to a special bond between the school and family that has grown out of a tragic circumstance.

In June 2015, Brendan McCarthy passed away at age 39 following a two-year struggle with amyotrophic lateral sclerosis. The degenerative muscular illness, for which there is no known cure, also is known as ALS or Lou Gehrig’s disease.

Keenan and his sisters Bailey, Kaelyn and Kiersten were between the ages of 1 and 7 when their father was diagnosed. Since the early stages of their father’s illness, St. Mary Our Mother’s community has offered steady support for the children and their mother, Killeen, as the kids progressed through prekindergarten through grade 6.

“They’re a wonderful family,” said Heather Bill, St. Mary Our Mother’s second-year principal, who also taught at the school for 12 years. “All of the staff and parents rallied around them, always made sure their needs were met at school and home. We love them and continue to make sure they’re OK.”

Brendan McCarthy was a beloved special-education teacher at Horseheads High School and an avid athlete and swimming coach, well-known across the Chemung County area for his infectious enthusiasm. But he gradually lost the ability to use his muscles, becoming unable to walk or talk and dependent on his family for such basic needs as dressing and getting around.

“You really can’t move. He had to be in a wheelchair and had a joystick he had to move forward (to control the wheelchair),” Keenan said, adding that his father communicated through an iPad speaking app.

Like the person for whom amyotrophic lateral sclerosis is named, Brendan McCarthy began his struggle with the disease before he turned 40. Lou Gehrig, a New York Yankees baseball star, played in 2,130 consecutive games over 14 years — then a major-league record. But even the man nicknamed “The Iron Horse” was vulnerable to ALS. Gehrig’s advancing illness forced the end of his streak in 1939, and he died in 1941, just shy of his 38th birthday.

As her husband’s ALS intensified, so did the level of kindness from St. Mary Our Mother School, Killeen McCarthy recalled. She noted that one group of families arranged to pack daily lunches for her children; the kids simply turned in their lunch boxes when the school day ended, and the boxes would be filled and returned the next morning.

“Everybody came together and offered food, cooking for us. It really helped,” Keenan said.

“It was amazing — just those little things you don’t think about,” Killeen remarked, noting that each child also was paired with a support person at St. Mary Our Mother for whenever they were struggling emotionally.

“It wasn’t a school, it was a family, I guess is the best way to say it,” added Killeen, whose family belongs to St. Mary Our Mother Parish.

To this day, the school — where Bailey, now beginning fifth grade, is the last sibling member enrolled — remains a special place for the McCarthys.

Keenan is now beginning seventh grade at Horseheads Middle School. Kaelyn and Kiersten are ninth- and 11th-graders, respectively, at Horseheads High School, where their mom is a math teacher.

Their dad’s legacy remains significant in the schools and wider community. For instance, T-shirts with the words “Lover-Fighter” in honor of Brendan McCarthy remain popular, according to his wife.

“They’re still everywhere. I still place orders for them for people,” Killeen said, explaining that the latter part of “Lover-Fighter” refers to how her husband opted to approach his diagnosis of ALS.

Keenan, meanwhile, said the expression helps him face difficulties in his own life.

“It signifies being a strong fighter, working through things — don’t give up,” said Keenan, who was awarded a Triple-C Award (commitment, character, courage) from St. Mary Our Mother School at the end of the 2021-22 school year.

Killeen McCarthy said all her children have responded admirably to the challenge of living without their dad. Even though they’ve had to grow up quickly, she said “they’re very resilient. They’re all willing to help, all responsible, all mindful of things kids shouldn’t have to worry about.”

“We all help out. If my mom can’t drive (me somewhere), I try to catch a ride with my friends,” Keenan said.

“We help each other out with schoolwork and stuff like that,” Bailey added.

Killeen said she’s faring reasonably well as a single parent of four, and on a personal level, she is taking comfort in her involvement with a growing network of community members who have lost a loved one prematurely. Community connections also continue to enhance her children’s well-being, she noted.

Killeen said her husband’s love and spirit also continue to guide their children, adding that she knows that Brendan is as proud of them as she is.

“Without a doubt. I fully believe it and feel it,” she said.

Tags: Catholic Schools, Health and Wellness
Copyright © 2022 Catholic Courier, Inc. All rights reserved. Linking is encouraged, but republishing or redistributing, including by framing or similar means, without the publisher's prior written permission is prohibited.