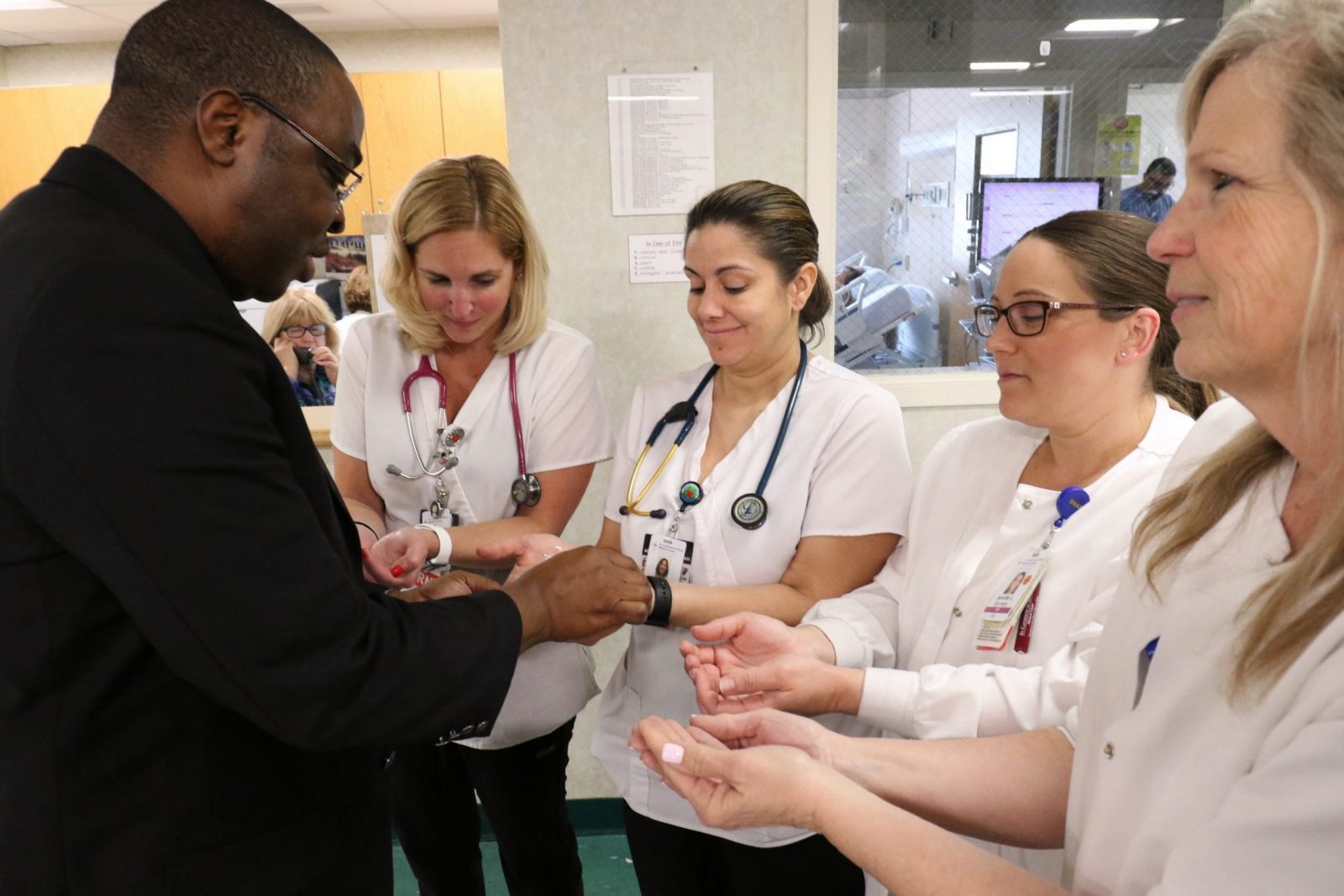 Father Corneille Boyeye, chaplain at St. Catherine of Siena Medical Center in Smithtown, N.Y., and a member of the Missionaries of the Sacred Heart, anoints the hands of Cecilia Prado, center, and other nurses in the hospital's telemetry unit May 7, 2018. Among the many heroes that have emerged during the pandemic, Catholic hospital chaplains are especially inspirational. (CNS photo by Gregory A. Shemitz)

Among the many heroes that have emerged from hospitals and other care facilities during the pandemic, Catholic hospital chaplains are especially inspirational. Whether virtually or in person, they have persevered to bring spiritual care and sacramental support to critically ill and dying COVID-19 patients while also providing a pastoral presence to families and health care workers at the heart of the crisis.

In the spring of 2020, when New York City hospitals were beginning to fill with critically ill patients, Paulist Father Paul Rospond could look through the window of his room in the rectory at St. Paul the Apostle Church and see the ambulances lined up in front of the emergency room at Mount Sinai West Hospital — but he couldn’t go inside and minister.

“It was overwhelming,” says Father Rospond. “There were so many ambulances, against the unusual quiet of the city. But for several months during the pandemic, we couldn’t go into the hospital at all.”

Calls for prayer helped to reach across the ambulance-clogged street, and then the hospital started setting up Zoom calls with Father Rospond, other chaplains, dying patients and their families. The calls were not a completely satisfactory substitute.

“Touch and anointing are part of the sacrament of the sick,” says Father Rospond. “Also, when a family is physically together, they can touch, talk, comfort each other as they cry.”

“It was possible to unite a number of family members,” says Father Rospond, “whether they were here or in Latin America. Waiting for the nurse to set up the call was a good opportunity to start a conversation among themselves as a substitute for family gatherings at the deathbed.”

“It’s not just social distancing,” says Father Mallin, “but the isolation people feel not only in the hospital, but at home.”

Father Mallin used technology to bring together patients, families and staff and said Mass by closed-circuit television, even at the height of the pandemic, offering the prayer for spiritual communion as a way for distanced faithful to participate in Eucharist.

“Here in the hospital, where people’s spiritual needs are intertwined with their health needs, particularly with COVID, there’s a level of frustration in trying to meet their needs.” But, Father Mallin says, “The Lord is not inhibited or frustrated by the sense of our isolation. God is still in that room.”

Besides chaplains’ efforts to minister electronically, some dioceses sought ways for priests to personally minister to the dying. Among these was the Archdiocese of Chicago.

Father Matt O’Donnell, pastor at St. Columbanus Catholic Church in Chicago, says, “Very early on hospitals were shutting down to visitors. Last March, Cardinal (Blase J.) Cupich recognized it would be important for people who were in danger of death from COVID to receive the anointing of the sick.”

Justin Lombardo, chief human resource officer of the Archdiocese of Chicago and co-lead of the archdiocesan COVID-19 task force, says, “Across the country, priests were hungry to continue ministry.”

An archdiocesan task force studied how this could be done safely and in late March 2020, 24 younger priests, including Father O’Donnell, 34, answered the call for volunteers. Training included PPE protocols and how to administer the sacraments.

Often, patients were intubated and unable to speak.

Father O’Donnell says, “It was humbling for me to be able to pray with them, blessing them with the sign of the cross on their forehead and hands, even to know if they weren’t able to respond that they were able to feel my presence there. Other rooms, they’re awake and very grateful.

“I saw one person in a nursing home. I asked her if she wanted to receive Communion and she immediately started to cry. After all those months (of not being able to receive), she just cried. As a priest, it’s a reminder of what we do.”

Father O’Donnell says he will be “mindful of the trauma of the number of people who passed away in a short amount of time” and believes parishes can help everyone heal.

“Creating spaces for people to talk about what they’ve felt and process what they’ve been through,” says Father O’Donnell, “that’s definitely a thing parishes can do something about.”