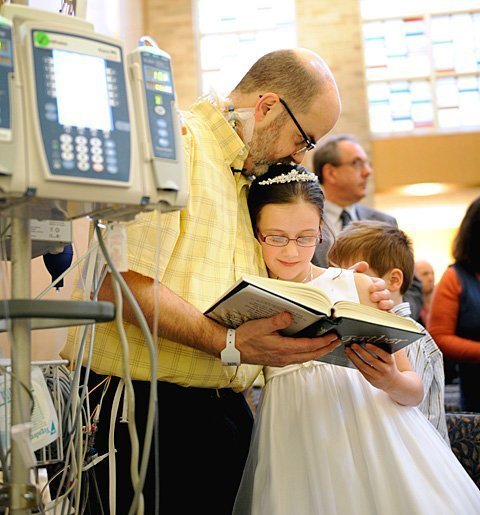 Tim Day kisses his 8-year-old daughter Erin at the end of her first Communion Mass April 26 at Strong Memorial Hospital in Rochester. Click here for a slideshow of photos from the liturgy.

ROCHESTER — Confined to Strong Memorial Hospital as he waits for a heart transplant, Timothy Day of Kenmore wasn’t going to be able to attend his 8-year-old daughter Erin’s first Communion.

So Erin decided the celebration of the Eucharist should come to him.

“I gave her the choice if she wanted to go through with her class or have it here with me, and she said she wanted to do it with me, and that’s pretty special,” said Day, who has been living at the hospital for six-and-a-half weeks.

“The most special part was just being with my dad,” Erin said in a telephone interview after the Mass.

Several weeks ago, staff at the family’s parish, St. Paul in Kenmore in the Diocese of Buffalo, called to the Diocese of Rochester to see if a priest would be available to celebrate a first Communion Mass in the Interfaith Chapel at Strong Memorial Hospital.

They were told it would be possible if they were willing to have the first Communion on a Friday, and if they would be willing to have Bishop Emeritus Matthew H. Clark celebrate the Mass. Day also received the sacrament of the sick during the Mass, which took place April 26.

Both the Day family and Bishop Clark said the honor was all theirs.

“I am going to go home a happy man for having experienced your company,” Bishop Clark said during the Mass.

Day, a Tonawanda police officer, said the Mass was special not only to have taken place, but to have included the participation of Bishop Clark.

“I think somebody upstairs was pulling strings for us,” he remarked.

In a phone interview after the Mass, Sherry Brinser-Day, Day’s wife and Erin’s mother, said the Mass so far exceeded their expectations that the event almost felt surreal. But the family is honored that everyone felt so highly of them to attend, she said.

“We want to make the best memories we can in the midst of all the trials we are going through,” Brinser-Day said. “I am overjoyed at the outpouring of support. I am floored.”

The event also included a large contingent of family, including Erin’s younger siblings Clare, 6, and Henry, 4; representatives of St. Paul Parish; hospital chaplains and personnel; a flock of local journalists; and a choir of local college students from the University of Rochester, Eastman School of Music and Rochester Institute of Technology who skipped Spring Fling and end-of-semester activities to attend.

To all of them, Bishop Clark spoke about the importance of drawing the community through the Eucharist.

“I know (Erin) is honored by your presence and draws strength from your company,” Bishop Clark said. “We are companions along the journey, trying to draw strength from each other in our faith.”

In his homily, he noted that all are subject to the frailty of the human condition, and that we draw healing and nourishment from the Eucharist.

That point is keenly noted by Day, who is one of 43 people hospitalized or at home waiting for a heart transplant through Strong Memorial Hospital. He was diagnosed in October with an autoimmune disorder, which damaged his internal organs, including his heart.

He said one thing that has made his long-term hospital stay easier is the accommodations made by the staff at the hospital.

“They are doing this for me this afternoon,” he said about the first Eucharist Mass. “They have gone above and beyond. I consider that a blessing that I have such great caregivers.”

As the youngest of 11 siblings, Day, 45, also is blessed with a large family and a lot of family support, he said. He noted that he has had at least one visitor a day during his entire hospital stay. Still, it’s not the same as being at home, he said.

“It hasn’t been hard to live here, but it’s just been hard to not live at home,” Day said. “I’m accustomed to seeing my wife and children.”

Brinser-Day, his wife of 11 years, said the hardship on their family has been balanced by the improvement in Day’s health since he has been at the hospital.

“If you had seen before in hospital and then saw him admitted and treated, he looks great,” she said. “He is really functionally doing very well.”

“It’s the new normal, and we do have to get used to it,” Brinser-Day said. “It could be months and months before this (situation) changes again.”

They also are trying to mentally prepare for the major surgery he faces with a heart transplant and the long recovery he will face after that.

“When he gets home there are going to be a lot of new challenges to face,” Brinser-Day said.

Since Brinser-Day is Protestant, and Day had always taken the lead at raising the children Catholic, Erin’s godfather, Griffin Jones, has made sure the children attend Mass and church functions while their father is in the hospital. Jones, who also is Timothy’s nephew and godson, proclaimed a reading during the Mass.

“He’s been wonderful,” Brinser-Day said of Jones. “That’s one thing about Tim’s family, they are so devout. Their value is on God. They value God, along with the family, along with making sure that everything’s good with Tim.”

Erin’s catechist, Michelle Fisher, who attended the Mass, said it was important for Day to be there at his daughter’s first Communion.

“I remember when he would bring her to Mass when she was a baby,” Fisher said. “He’s been so involved in her faith.”

During the Mass, Erin read the prayers of the faithful, praying for her parents for leading her in the faith, for all those suffering from diseases, especially her dad, and for those who have died, including members of her family.

When Bishop Clark complimented Erin on reading the prayers, he asked if she was nervous.

She told him she had butterflies.

“Sometimes those are good, because they make you realize you are doing something that means something,” Bishop Clark said.