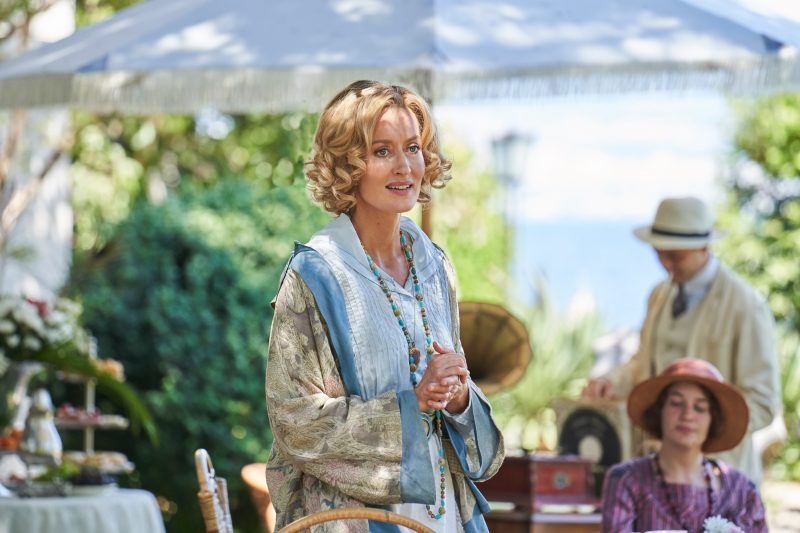 Having first aired on BritBox in January, the glossy soap opera — created and written by former journalist Matt Baker and directed by British filmmaker Adam Wimpenny — debuts on PBS Sunday, June 19, 8–9 p.m. EDT. It will continue in that time slot throughout its run, which concludes July 24.

Set in 1926, four years after the rise to power of Benito Mussolini’s fascist regime, the show charts the shifting fortunes of British expatriate and newly-minted hotelier Bella Ainsworth (Natascha McElhone, “Designated Survivor”) as well as those of her first crop of guests.

Chief among the latter are Julia Drummond-Ward (Lucy Akhurst) and her 20-something daughter, Rose (Claude Scott-Mitchell). Julia is both overprotective of Rose and determined to get her hitched. Since Julia has a history with Bella’s husband, Cecil (Mark Umbers), an alliance with the Ainsworth’s son, Lucian (Oliver Dench), seems like a good idea.

Although nearly eight years have passed since the Armistice, World War I veteran Lucian still bears the physical scars he acquired as a soldier. He also continues to suffer from the emotional trauma his experience on the battlefield provoked.

Lucian’s father dismisses his desire to become a professional artist. Yet Lucian engages with and entertains Rose, trying to comply with his dad’s wishes. Eventually, however, Lucian seeks comfort and healing with another woman. As the story unfolds, it appears that Rose will not turn out to be Lucian’s true love.

Bella and Cecil have their own problems. In fact, the first time we see him, Cecil — who has squandered a considerable inheritance — is drunkenly engaged in stealing money from his wife. And Cecil’s insistence that his wife continue borrowing funds from her father only aggravates the tension between them.

Additionally, both spouses are having affairs, and Bella’s proves costly for her. Fascist Party member and local government official Vincenzo Danioni (Pasquale Esposito) gets wind of Bella’s illicit romance and threatens to blackmail her. Indeed, as the plot progresses, Mussolini’s infamous “black shirts” have an ever-increasing impact on the narrative.

As will be readily apparent, “Hotel Portofino” is strictly grown-up fare. Based on the first three installments reviewed, the program contains not only the mature topics already described but some violence, depictions of racism, nongraphic sexual activity and a flash of rear male nudity as well. Profane language and crude expressions also put in an occasional appearance.

Several characters’ moral waywardness makes it difficult to regard them sympathetically, and the trite and implausible way Baker handles the extortion scene typifies the weak writing that mars his tale.

Asked what he’s after, Danioni replies: “What we all want.” — pause for effect — “Money.” It’s a hackneyed, over-the-top moment from which only a villain’s cliched laugh is missing.

Baker also indulges in some anti-Catholicism. Thus Gianluca Bruzzone (Rocco Fasano) — an opponent of fascism who is obviously meant to be seen in a positive light — blandly asserts that the church’s “lies and mystical nonsense” contributed to Mussolini’s ascent.

Bruzzone’s impious dismissal of the faith aside, the historical truth is far more subtle and complex. The dictator did court the church’s favor at first, and with considerable success. But the relationship eventually soured, especially after Mussolini adopted some of the racial theories of the Nazis, ideas explicitly condemned in Pope Pius XI’s 1937 encyclical “Mit Brennender Sorge.”

Some of the script’s themes, by contrast, are more realistic and even evocative. Veterans of the strife in Afghanistan and Iraq, for example, will certainly relate to Lucian’s travails. And the dangers of extremism are, unfortunately, hardly a thing of the past.

Still, the series’ inviting scenery remains its principal asset. Yet few may ultimately think such lush landscapes reason enough to pay a visit to “Hotel Portofino.”