House at the End of the Street - Catholic Courier 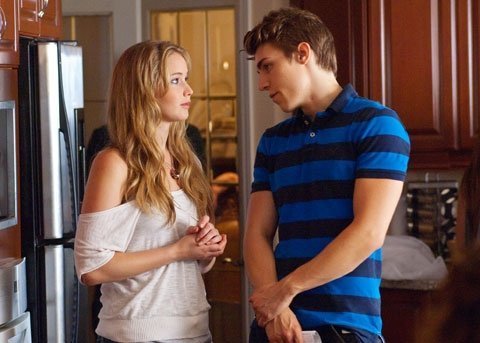 NEW YORK (CNS) — "House at the End of the Street" (Relativity) has some wild, weird stuff going on in the sub-basement, but overall, it’s a somewhat elegant psychological thriller overstuffed with spooky music and with less gore than an old episode of "Murder, She Wrote."

Director Mark Tonderia and screenwriter David Loucka have crafted a tale that floats on the star power of Jennifer Lawrence, who plays 17-year-old Elissa Cassidy, a sensitive girl who likes to "rescue" others.

Elissa and her mother, Sarah (Elisabeth Shue), have moved to a rural neighborhood after her mother’s divorce, conveniently near a house in which, four years earlier, a young girl stabbed both her parents to death and ran away, never to be captured. Naturally, the neighbors complain of the effect this has had on their property values.

What’s in the sub-basement? Or rather, who’s locked up there? Although Sarah drinks too much and has to work night shifts in a hospital emergency room, why doesn’t Elissa listen to her warning about being alone with Ryan? And who’s sharpening all that cutlery?

There aren’t many genuine frights, but it’s fun to shout at the screen.

The film contains knife, gun and physical violence, fleeting crass language and a scene of drug use. The Catholic News Service classification is A-III — adults. The Motion Picture Association of America rating is PG-13 — parents strongly cautioned. Some material may be inappropriate for children under 13.