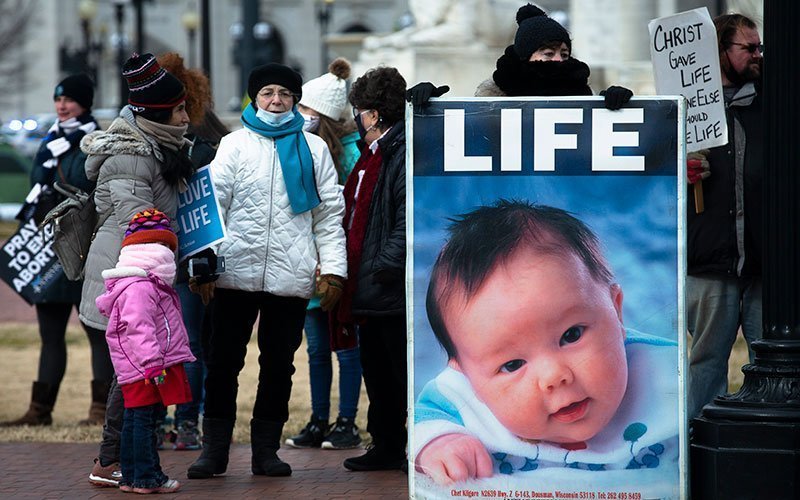 March for Life participants demonstrate near Union Station in Washington Jan. 29, 2021, amid the coronavirus pandemic. (CNS photo by Tyler Orsburn)

Smith, a Catholic, who is co-chair of the Congressional Pro-Life Caucus, was joined by 142 other members of the U.S. House in introducing the measure Feb. 15.

“We know that by 20 weeks unborn babies killed by abortion experience excruciating suffering and physical pain,” Smith said a statement.

“The dismemberment abortion — the most common abortion method used during the second trimester — involves cutting and dismembering the child’s fragile body including severing his or her arms and legs,” he said. “Until rendered unconscious or dead, the baby feels every cut.”

He called this “unconscionable human rights abuse” that “must stop.”

“Pain, we all dread it. We avoid it. We even fear it,” Smith said. “And we all go to extraordinary lengths to mitigate its severity and its duration for ourselves. Yet every day, a whole segment of human beings is being subjected to painful — and deadly — procedures.”

Saying that today “we are not living in uninformed times,” Smith cited reports on fetal pain by a number of medical experts, including Dr. Colleen Malloy, assistant professor in the Division of Neonatology/Department of Pediatrics at Northwestern University’s Feinberg School of Medicine.

“When we speak of infants at 20 weeks post-fertilization, we no longer have to rely on inferences or ultrasound imagery, because such premature patients are kicking, moving and reacting and developing right before our eyes in the neonatal intensive care unit,” Malloy said in testimony before the House Judiciary Committee in May 2012.

“In other words, there are children the same age who, in utero, can be painfully killed by abortion who have been born and are now being given lifesaving assistance,” said Malloy, who similarly testified in March 2016 before the Senate Judiciary Committee, which at the time was considering its own version of the Pain-Capable Unborn Child Protection Act.

“One of the most basic of government principles is that the state should protect its members, including all born infants, from harm. … We should not tolerate the gruesome and painful procedures being performed on the smallest of our nation,” Malloy said.

Carol Tobias, president of National Right to Life, said Feb. 16 that the Pain Capable Unborn Child Protection Act “would prevent cruel and excruciating abortions from being performed on innocent children.” She was grateful that Smith and a third of House members who back “the unborn child should not die painfully and brutally.”

Results of a Knights of Columbus/Marist Poll released in late January showed that 55% of respondents supported banning abortions after 20 weeks of pregnancy, except to save the life of the mother. The percentage included 69% of pro-lifers, 55% of Independents and 45% of those who self-identified as “pro-choice.”