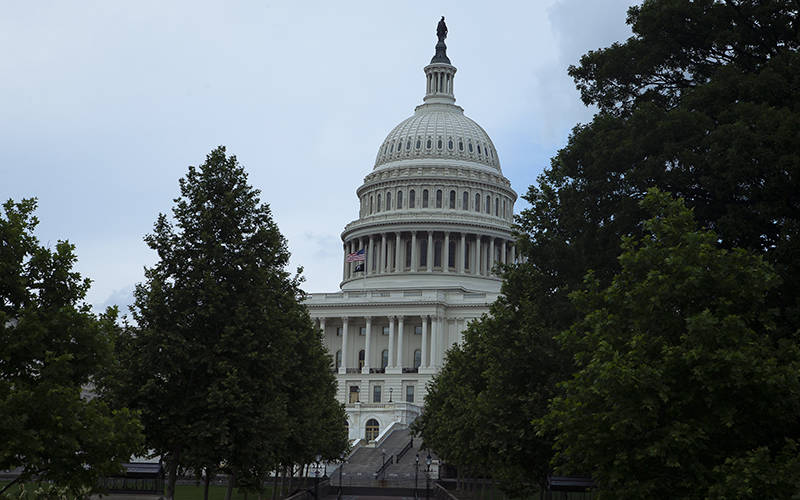 WASHINGTON (CNS) — House Minority Leader Kevin McCarthy, R-Calif., and several other Republican leaders in the House asked their Democratic counterparts June 22 to take up a measure introduced by Rep. Chris Smith, R-N.J., that would make the long-standing Hyde Amendment permanent.

The Hyde Amendment, which first became law in 1976, prohibits use of federal Medicaid dollars for abortion except in cases of rape, incest or when the life of the woman would be endangered.

Smith’s bill, titled the No Taxpayer Funding for Abortion and Abortion Insurance Full Disclosure Act of 2021, or H.R. 18, had 166 co-sponsors.

On June 23, in a late afternoon vote, all 218 Democrats in the House approved a procedural “previous question” motion that prevented the House from debating and voting on the measure. The Republican vote against the motion was 209.

Smith told Catholic News Service that House Republicans then began a series of “unanimous consent requests” on the floor asking that H.R. 18 be immediately discharged from three committees and brought to the floor for debate and a vote. McCarthy made the first request, “followed by others including me. We are going to do this every day until the August recess.”

Kat Talalas, a spokeswoman for the U.S. Conference of Catholic Bishops’ Secretariat of Pro-Life Activities, said the House’s failure “to pass H.R. 18 is unjustifiable.”

“It is gravely wrong to force all Americans to pay for the killing of innocent babies with their tax dollars. Congress must act to protect millions of babies and their mothers from the tragedy of abortion and protect American taxpayers from paying for the destruction of innocent human life,” she said June 23.

Named for the late Rep. Henry Hyde, an Illinois Republican, the amendment has been renewed every year since 1976 as part of spending measures.

It was excluded, however, in the $1.9 trillion American Rescue Plan Act signed into law March 11 by President Joe Biden, a Catholic. It also was not part of the proposed federal budget Biden released May 28.

A day before the House GOP leaders issued their call for Democrats to make Hyde permanent, a coalition of 22 state attorneys general, led by Alabama Attorney General Steve Marshall, asked Congress to keep the Hyde Amendment in the federal budget “after it was conspicuously removed by the Biden administration.”

“Lives have been saved by the Hyde Amendment,” said Smith, a Catholic, who has supported the measure for over four decades. “Over 2.4 million people who would have been aborted instead survived and their mothers benefited from prenatal health care and support.

“Furthermore, polling consistently shows that a majority of Americans oppose taxpayer funding of abortion — early 6 in 10 according to a Marist poll released earlier this year.”

In a statement June 22 and in comments on the House floor June 23, Smith pointed out that years ago, then-Sen. Biden “wrote to constituents explaining his support for the Hyde Amendment and said it would ‘protect both the woman and her unborn child.’ He said: ‘I have consistently — on no fewer than 50 occasions — voted against federal funding of abortions … those of us who are opposed to abortion should not be compelled to pay for them.’ I totally agree.”

Ahead of the November 2020 election, Biden said he no longer supported the Hyde Amendment. He and his running mate, now-Vice President Kamala Harris, also vowed to support congressional efforts to codify Roe in the event that Roe is overturned by the U.S. Supreme Court.

“Growing numbers of Americans continue to be shocked to learn that the methods of abortion include dismemberment of a child’s fragile body including decapitation, and that drugs like RU-486 starve the baby to death before he or she is forcibly expelled from the womb,” Smith said on the House floor.

“The multibillion-dollar abortion industry cleverly markets the sophistry of choice while going to extraordinary lengths to ignore, trivialize and cover-up the battered baby-victim,” he continued.

“By reason of their age, dependency, immaturity, inconvenience, fragility and/or unwantedness, unborn children have been denied justice — and the most fundamental of all human rights, the right to life,” Smith said.

“The right to life is for everyone,” he added, “not just the planned, the privileged or the perfect.”

Harris, who also is Catholic, said in a June 22 statement: “At a time when this commonsense and historically bipartisan amendment faces serious threats from congressional pro-abortion Democrats — with the support of the Biden administration — it is more important than ever to stand up and push back on the radical pro-abortion agenda.”

As a member of the House Appropriations Committee and co-chair of the Pro-Life Caucus, he said he strongly opposes using “taxpayer funding for abortion” and that he “will continue to advocate for protecting the Hyde Amendment.”

Like Smith and Harris, Scalise, Stefanik and Fischbach also are Catholic.

In addition to making the Hyde Amendment permanent, H.R. 18’s provisions also would, among other things:

— Ensure the Affordable Care Act conforms with the Hyde Amendment.

— Prohibit federal funding of abortion in several other federal programs throughout government agencies.

Smith also told CNS June 23 that the House Committee on Appropriations will soon mark up the financial services general government bill “and the Democrats removed the Smith Amendment” from the measure. Smith said he first offered the amendment “successfully in 1983.”

In the June 21 letter addressed to House and Senate leaders and signed by 22 attorneys general, Alabama’s Marshall wrote: “The decision by President Biden to reject the Hyde Amendment and attempt to force states to fund activity that is violative of their own laws and policies is an affront to state sovereignty. … Congress should resist following President Biden down this path and should instead maintain the Hyde Amendment language in the budget it ultimately passes.”

“Fighting for the freedom of conscience has been a hallmark of state attorneys general. We have a unique interest in the Hyde Amendment as an important protection for the consciences of the millions of Americans who oppose public funding of abortion,” he said.

Tom McClusky, president of March for Life Action, said June 23 that supporting the Hyde Amendment “is not only the right thing to do, but the majority of Americans also support such pro-life protections.”

“We applaud Rep. Chris Smith, Rep. Kat Cammack, Rep. Michelle Fischbach and so many others, who are seeking to make these protections permanent,” he said.

But, they said, it was remiss in leaving out Hyde, which protects the most vulnerable — the unborn.

In March, when Biden signed the $1.9 trillion American Rescue Plan Act into law, Los Angeles Archbishop José H. Gomez, USCCB president, and the chairmen of six USCCB committees in a joint statement praised its “positive provisions” to help people in “extremely desperate situations” because of the pandemic.

However, they called it “unconscionable” that Congress passed the bill without the Hyde Amendment.

Diocesan Respect Life coordinators in Catholic dioceses and the USCCB Secretariat of Pro-Life Activities are encouraging Catholics to speak out in support of the Hyde Amendment and to sign a petition at telling Congress to keep the amendment intact. The petition can be found at https://bit.ly/3qnupu8.