House of Mercy has helped people for 25 years - Catholic Courier 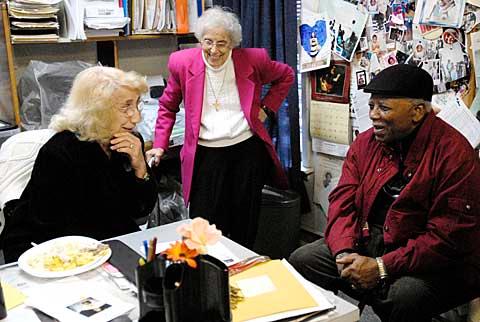 Sister Grace Miller (left), founder of the House of Mercy, speaks with Sister Gloria Ruocco (center) and civil-rights leader the Rev. Franklin Florence in her office Oct. 2 during the House of Mercy’s 25th-anniversary celebration.

ROCHESTER — He had only arrived at the House of Mercy about a week earlier, but Scott already had a mop in his hand.

As he paused from work a moment, Scott recounted what brought him to the homeless shelter and services agency in northeast Rochester: an addiction and a life spiraling out of control.

"I had a problem with my job, and I left my job," he said. "I went through the money I had saved, and it ran out."

That’s how he wound up at the House of Mercy. Once there, he gave thanks for the roof over his head and food in his stomach by joining the daily cleaning crew. He also is making plans to enter a treatment program to kick his addiction for good.

Like Scott, many people have gratefully given back to the House of Mercy, whose volunteers and a lone paid staff member serve more than 4,000 people a month. The shelter and community center does this on a shoestring budget that operates primarily on donations of money, food and clothing from individuals.

The organization’s 25th anniversary was celebrated Oct. 2 with a community breakfast, Mass, banquet, music, dancing and a performance by the House of Mercy gospel choir called New Arisings.

Sister of Mercy Grace Miller, a Corning native, said the House of Mercy aims to practice the hospitality promoted by Sisters of Mercy founder Catherine McAuley. Before she opened the home’s doors in 1985, Sister Miller drove around the city talking to people about the situations they faced and what their needs were.

"I found the people were really hurting," she said. "Some people told me before we opened up that they were eating food from Dumpsters. They said, ‘We were here for a long time, and nobody helped us.’ "

She saw the largest number of people on the streets around the Central Park neighborhood, so she decided to locate the ministry there. Just a few days after signing a lease for a five-room house, she furnished it with a desk and opened the doors. Days later, word had spread and people began to show up at the door.

Mothers with hungry children were the first to flock to the House of Mercy, Sister Miller recalled. Soon they were joined by the homeless, the unemployed, the sick, the addicted and the disabled.

"They were like sheep without a shepherd," Sister Miller remarked.

The home offers assistance to those in need help at all of the day and at all times of the year. People in need are given clothing and bags of food. Bathrooms are available. Others need help reading, since they are unable to decipher notices of utility shutoffs and other important paperwork that arrives in the mail. Others need a lift to doctors’ appointments. Some need an advocate to help them straighten out complicated situations with social services.

Some at the House of Mercy need help kicking addictions, which is why a team of volunteers opened the relapse-prevention Farbridge House Ministry for men and women transitioning out of treatment and into jobs and homes.

Spiritual needs also are addressed. The House of Mercy offers daily prayers and a weekly Bible study and prayer service. Although those at the house arrive with a variety of faith traditions, including no faith at all, many say they find common spiritual ground.

"There’s unity amongst us," said Muhammad Abdullah, a Muslim, who said he finds the daily prayer and Scripture readings to be a very positive means of spiritual assistance.

The home also offers an outlet for the community’s collective grief, including displaying hundreds of funeral programs on the walls of the office. The programs are permanent reminders of those who spent time with the House of Mercy community, and notice to a transient population about the passing of friends.

"This is a communion of saints, and we are family," Sister Miller said.

Yet as that family keeps growing and growing, the House of Mercy faces a never-ending space crunch and significant repair needs at its location at 725 Hudson Ave., where it moved in 1994.

"This place is not big enough for us," Sister Miller said. "We’ve outgrown it, but we make do. We have formed a committee to work on finding a place. We call it the dream team."

She said the organization is struggling with the decision of whether to purchase another place in the neighborhood or expand in its current location. After its leaders make such critical decisions, they will launch a public-outreach campaign and fund drive in 2011.

Those who have come to rely on the House of Mercy say they hope that the ministry lasts many years into the future.

"Thank God for the House of Mercy," said Prince, who has been coming to the House of Mercy for more than 20 years. "We all need more places like this, and the staff is excellent. I just wandered in one day, and here I am, a part of the family."