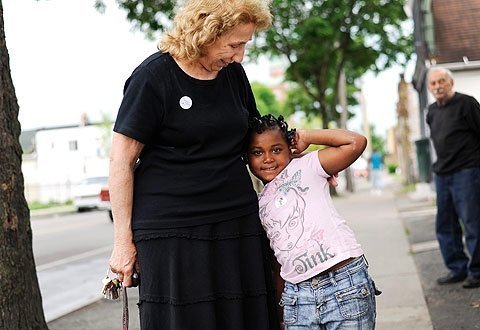 ROCHESTER — Tyazia Woods, 5, and her mother burst into the House of Mercy, filled with excitement.

While her mother was ecstatic about the Head Start diploma her daughter received earlier in the day, Tyazia was bubbling about the party after her graduation.

"I had a bouncy house at my school!" she exclaimed.

Tyazia is the third generation in her family to get support from the House of Mercy, a homeless shelter, drop-in center and outreach on Hudson Avenue. Her mother and grandmother have been coming to the House of Mercy for aid for many years.

"Sister Grace (Miller) and (staff member Rita Lewis) have been a lot of help to me," Shyquain Woods said. "I’ve gone through a lot of things with my family when I’ve needed stuff."

The Woods were some of the more than a dozen people on this day who were spending their time at the home. Some slept or watched TV in between meetings with staff members, who were in constant motion, attending to one crisis after another.

Yet the House of Mercy is in the midst of its own crisis. It is desperate for a larger space and a new or renovated facility. Some of the ministries of the home are on different levels, and stairs in the home make it difficult for people in wheelchairs to get around. A lack of private office space for staff and volunteers means some discussions requiring privacy have to take place out in the open.

Additionally, the home strains to find space to provide services, such as tutoring, to the children who drop in daily.

"What we really would like is land and to build from scratch," said Sister Grace Miller, executive director.

While Sister Miller said the House of Mercy wants to stay as close to its current location as possible, Shyquain Woods said she’d like to see the ministry choose a new location in a safer area than its current neighborhood on Hudson Avenue.

"A lot of trouble gets started down here, and it’s a real scary thing," she said.

The ideal facility would allow all of the House of Mercy’s ministries to be located on one floor, with an upstairs for living, sleeping and meetings, Sister Miller said. Wish list items would be such things as a chapel, a hospice and some sort of medical facilities, she added. Additional office space is needed for both staff and volunteers; volunteers are sometimes turned away because there is just not enough space to accommodate them, Sister Miller said.

"We have a facility committee looking at all aspects where we are functioning over our capacity," said Diane Quinlisk, director of business development and programs, who was formerly chairwoman of the ministry’s board of directors.

A capital campaign to raise funds for a new or renovated facility has not yet officially kicked off, but a fundraiser dinner took place April 27 at Mario’s in Pittsford with the goal of raising awareness in the community of the House of Mercy’s space needs, as well as funds for day-to-day operations. The agency is planning several upcoming fundraisers: a 5K race in October and a Christmas dinner-dance.

Quinlisk said the organization is several years away from a new location.

"The issues are so much more than food and shelter," Quinlisk remarked. "It’s about the dignity of life."

Staff members from the House of Mercy also are available to speak to parishes and other organizations about its work.

"To hear the story and to hear Grace is always a great opportunity," Quinlisk said.

That is one difficulty of embarking on a long-term fundraising project: It can’t take away from the short-term emergency needs that are so pressing, Sister Miller said. For instance, in the summer months, demand is high for food, furniture, hygiene items, sheets and socks.

"It’s the multiplication of the loaves and fishes," she observed.

Advocacy on several fronts also consumes Sister Miller’s attention. On the day of her interview with the Catholic Courier in mid-June, Sister Miller said many people from the House of Mercy took part in a memorial service at St. Mary Church to say goodbye to four homeless men who had died recently: Eric "Red" Knight, Edward "Eddie" O’Dell, Mark "Bear" Ruddy and Bruce Scharett.

Additionally, Sister Miller was gearing up later that day to call on county legislator to restore the county’s subsidy for burials and funerals of the indigent and set minimum standards for these burials. In 2006, the subsidy was cut from $1850 to $1250, which covers cremation, but not burial. Families of the indigent who request burial due to religious or cultural beliefs must apply for funds from the Rochester Community Supplemental Burial Fund, which was set up by local churches, but demand for the fund far outstrips what is in its coffers, Sister Miller said.

"It’s a question of justice," she said. "We are forcing people to choose between cremation and burial."

Marvin Mich, a member of the burial fund committee and director of social policy and research for Catholic Family Center, said though the fund recently received a $7,000 donation from a church and currently has about $8,000, in general donations have not kept pace with demand for funds. Grants have ranged from $100 to $1,000, he said.

"This is a paltry sum; we need more than that," said Mich, the past president of the Faith in Action Network, which started the burial fund.

Proposals to set minimum burial standards and increase the county’s funeral subsidy were submitted to legislature President Jeff Adair but were not referred to the legislature for consideration in July, according to the legislature’s Democratic members. Democrats had estimated the increase would cost the county $430,000 a year, and they proposed paying for that by cutting the number of county vehicles, eliminating the vacant assistant county executive position and cutting office supplies by 10 percent.

According to letters from Adair dated July 11 notifying the proposals’ sponsors of the rejection, the amendments to allow for the funeral subsidy "are inaccurate and do not adequately correspond to the 2012 Budget" and the burial policy proposal was rejected "because it is an improper legislative action."

In addition to long-standing advocacy on behalf of the poor, the House of Mercy provides direct aid daily to those who find their way to its doors.

One such person is Thomas Doyle, who came to the House of Mercy in mid-June after losing his home. He was sleeping in a sleeping bag near Meigs Street before someone told him about the House of Mercy. He said staff members were working with him to get new copies of his identification so that he would be able to apply for the Social Security benefits to which he was entitled.

Another resident, Samuel Barton, credits the House of Mercy for saving his life, because staff members got him to a doctor when he needed his leg amputated.

"Everything I need, they’ve helped me with, even my spirituality," said Barton, who has lived at the House of Mercy on and off for five years.

He said the ministry’s main need is a bigger facility.

"You can’t ask for them to give you much more," Barton said. "They already give you everything they have."