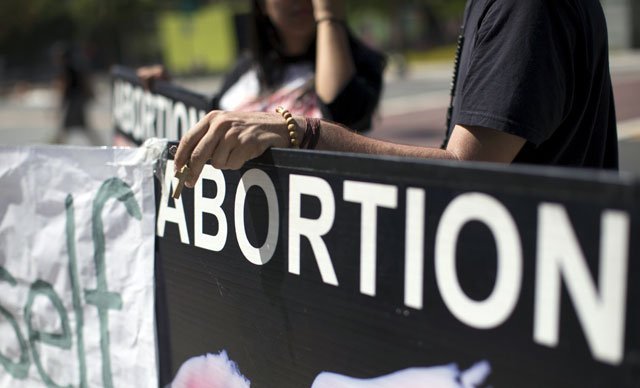 A pro-life activist holds a rosary while protesting outside City Hall in Los Angeles Sept. 29. U.S. congressional Republicans challenged Planned Parenthood's eligibility for continued federal funding, while the organization's president said defunding it would restrict women's access to care and disproportionately hurt low-income patients.
By Catholic News Service
WASHINGTON (CNS) — The House Sept. 29 passed the Women’s Health and Public Safety Act to give states the authority to defund Planned Parenthood.
Speaking from the House floor in support of the measure, which was sponsored by Rep. Sean Duffy, R-Wisconsin, Rep. Chris Smith, R-New Jersey, cited the pope’s Sept. 24 address to a joint meeting of Congress.
"Pope Francis admonished a joint session of Congress to follow the Golden Rule — to ‘do unto others as you would have them do unto you’ — and said that the Golden Rule compels us to ‘protect and defend human life at every stage of development,’" Smith said.
State and federal funding of Planned Parenthood has come under scrutiny after a series of videos, filmed undercover, were released by the Center for Medical Progress, based in Irvine, California.
The videos show physicians and others associated with Planned Parenthood describing the harvesting of fetal tissue and body parts during abortions at their clinics. Also discussed are what researchers are charged for the tissue and parts.
Top Planned Parenthood officials dispute what the videos show, saying they have been edited to manipulate the interviews and any mention of money for tissue and body parts is related to customary handling fees charged the researchers. The center stands by its videos.
"States should have the freedom to choose who they subsidize and why," Smith said in his remarks before the House passed H.R. 3495. A companion bill awaits action in the Senate.
"Although much of the media continues to ignore this scandal, Planned Parenthood’s meticulously crafted facade of care and compassion has been shattered," he said. "Caught on tape, Planned Parenthood’s top leadership — not interns or lower level employees — show callous disregard for children’s lives."
In mid-September, the House passed Defund Planned Parenthood Act of 2015, or H.R. 3134, which would prohibit for a one-year period federal funding "for any purpose to Planned Parenthood Federation of America Inc., or any of its affiliates or clinics, unless they certify that the affiliates and clinics will not perform, and will not provide any funds to any other entity that performs, an abortion during such period."
The measure says the restriction will not apply in cases of rape or incest or to save the life of the mother.
Copyright © 2022 Catholic News Service, Inc. All rights reserved. Linking is encouraged, but republishing or redistributing, including by framing or similar means, without the publisher's prior written permission is prohibited.