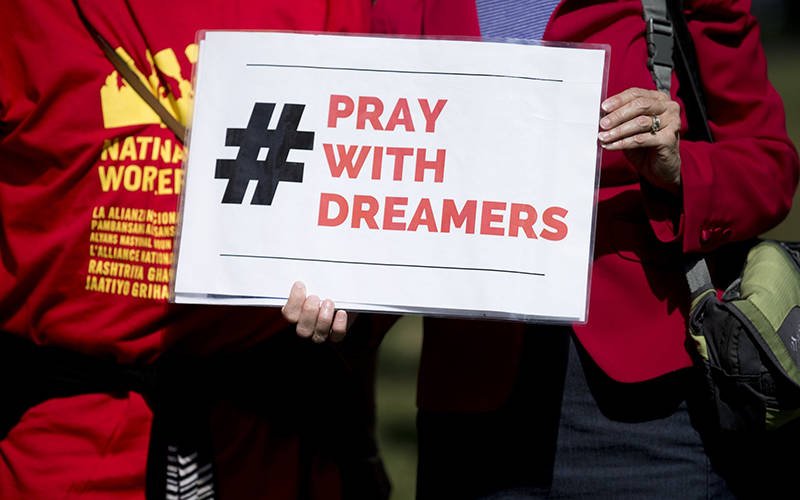 Demonstrators attend a rally near the U.S. Capitol in Washington Sept. 26, 2017, calling for passage DREAM Act. The Development, Relief and Education for Alien Minors Act, which would provide a pathway to U.S. citizenship for unauthorized immigrant youth, has never passed Congress. It was reintroduced in the Senate and House Feb. 2, 2021, and March 3, 2021, respectively. (CNS photo by Tyler Orsburn)

Both measures passed in the House along party lines, for the most part, with but will face greater opposition in the U.S. Senate.

The U.S. bishops were among those from various faith-based organizations, including Catholic groups such as the Franciscan Action Network and the Columban Center for Advocacy and Outreach, voicing support for the bills: the American Dream and Promise Act and the Farm Modernization Workforce Act.

They are aimed at helping “many hardworking immigrants reach their God-given potential, not only for their benefit but for that of the entire country,” said the president of the U.S. Conference of Catholic Bishops and the bishops’ migration committee chair in a joint statement released March 19.

“Inspired by the life of Christ, the Catholic Church remains committed to ensuring that all persons within our society are given the opportunity to flourish, especially those so often relegated to the margins,” the prelates said, calling on the Senate to “pass these measures swiftly.

“We once again call on legislators from both chambers of Congress to work together to enact broader, vitally needed reforms to address our broken immigration system,” the prelates said in their statement. “We pledge to work with Congress and the administration on this effort, which we believe is an urgent issue to uphold life and human dignity.”

Via a late March 18 news release from the Interfaith Immigration Coalition, a network of 55 national, faith-based organizations “with a common call to seek just policies that lift up the God-given dignity of every individual.”

“As people of faith, we believe that everyone deserves legal protection, especially dreamers, TPS holders and farmworkers,” said Scott Wright, director of the Columban Center for Advocacy and Outreach.

TPS, or Temporary Protected Status, is given to eligible nationals of designated countries who are present in the United States.

“As we urge the Senate to quickly pass these bills,” Wright said, “we remind them of what Pope Francis said to Congress during his 2015 visit: ‘Let us help others to grow, as we would like to be helped ourselves. In a word, if we want security, let us give security; if we want life, let us give life; if we want opportunities, let us provide opportunities.’”

Stephen Schneck, executive director of the Franciscan Action Network, called the House action “a positive and welcome step to protect migrants, strengthen our economy, and keep families together.”

“We heed Pope Francis’ call to ‘build bridges, not walls’ and urge the Senate to act swiftly in passing the equivalent bills to help our vulnerable immigrant brothers and sisters,” he said.

The National Advocacy Center of the Sisters of the Good Shepherd also weighed in, calling on the Senate to approve the measures this spring.

In talking about the “Dreamers,” farmworkers and others covered by the House bills, Lawrence E. Couch, the center’s director, said: “They held the hands of their parents as they made the perilous journey north. They hand-pick our strawberries. They clasped hands upon touching down in America after fleeing natural disasters. Now it is time — long past time — for members of Congress to raise their hands and vote for passage of the Dream and Promise Act and the Farm Workforce Modernization Act.”

“These undocumented youth, TPS and DED (Deferred Enforced Departure) holders, and farmworkers are American in all but a piece of paper,” Couch said. “They face continuing threats of deportation and have lived so long in uncertainty and with harassment. They deserve peace and the ability to work freely and safely.”

In the halls of Congress, political fighting over whether there is an immigration crisis at the border intensified during the debate over the measures.

While neither bill is expected to become law, they serve more as bellwethers of what the battle for immigration reform could look like under President Joe Biden.

Earlier in the year, the Biden administration rolled out a road map toward that goal under the name of the U.S. Citizenship Act of 2021, introduced in Congress Feb. 18. It seeks to legalize some 11 million unauthorized immigrants currently in the U.S., with a special focus on reunification of families.

It would offer immediate permanent resident status to some groups, such as young adults brought into the U.S. illegally as children, farmworkers and those under a program known as Temporary Protected Status, while also providing an eight-year path to citizenship for others.

The American Dream and Promise Act for unauthorized immigrants has enjoyed strong backing in the past as it seeks to provide young adults brought to the country illegally as children a path toward citizenship.

All House Democrats voted for it, and nine Republicans voted with them. It passed 228-197.

Currently, young people known as “Dreamers” are protected by the Deferred Action for Childhood Arrivals program, or DACA.

The House measure would similarly benefit immigrants in the country under the TPS program, which grants a work permit and reprieve from deportation to certain people whose countries have experienced natural disasters, armed conflicts or exceptional situations so they can remain temporarily in the United States.

Seven Republicans broke ranks and voted for the bill in 2019 in the House, but the proposed legislation didn’t have the votes to pass in the Senate.

Early signs show a tough road ahead. House Minority Whip Steve Scalise, R-La., urged Republicans March 17 against voting for the Dream Act, instead steering the conversation toward the border.

“The bill would only worsen the flow of illegal immigrants to the U.S.,” Scalise said to colleagues in a statement.

The Farm Modernization Workforce Act passed 247-174; 30 Republicans voted for it and two Democrats opposed it. It would allow farmworkers to earn legal status and later they also can apply for permanent residency by showing prior employment and continued work in agriculture.