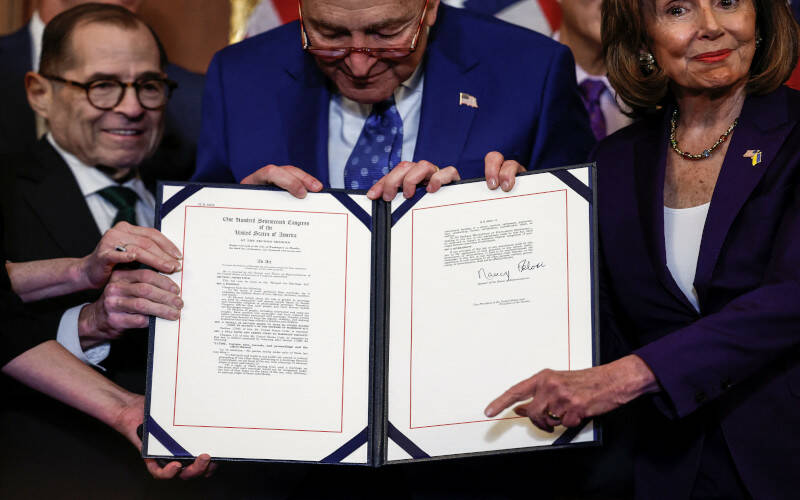 WASHINGTON — By a vote of 258-169, the U.S. House of Representatives passed the Respect for Marriage Act Dec. 8 and sent it to President Joe Biden for his signature.

Biden is expected to sign the bill legalizing same-sex marriage into law.

The president praised Congress for a measure the U.S. Catholic bishops and other religious leaders have said does not clearly protect the religious freedom of churches and individuals who believe in traditional marriage between one man and one woman.

The House approved the measure by a wide margin in July, but had to vote on it again after the Senate passed an amended version Nov. 29 in a 61-36 vote.

Senate Democrats were joined by 12 Republicans who backed the bill after they were satisfied with an amendment they said would protect the rights of those who oppose same-sex marriage on religious grounds.

But after Senate passage, the chairman of the U.S. bishops’ Committee on Laity, Marriage, Family Life and Youth said he was “gravely disappointed.”

Bishop Robert E. Barron of Winona-Rochester, Minn., said Dec. 1 that the measure “fails to include clear, comprehensive and affirmative conscience protections for religious organizations and individuals who uphold the sanctity of traditional marriage that are needed.”

Decades of social and legal developments “have torn sexuality, childbearing, and marriage from each other in the public consciousness,” Bishop Barron said in a statement released by the U.S. Conference of Catholic Bishops.

“Much of society has lost sight of the purpose of marriage and now equates it with adults’ companionship,” he said.

“We affirm our respect for the dignity of all engaged in this debate and acknowledge differing perspectives in our civil society,” Bishop Barron added, “but the impact of this bill will only contribute to the diminishment of the sacredness and integrity of marriage in our society.”

Ahead of the Senate vote, Bishop Barron joined Cardinal Timothy M. Dolan of New York, chairman of the USCCB’s Committee for Religious Liberty, in reiterating the bishops’ ” firm opposition” to what they called a “misnamed” measure.

In a Nov. 23 joint letter to all members of Congress, the chairmen said they were writing “to implore Congress to reverse course” on the Respect for Marriage Act, also known as RMA.

The letter said the bishops’ opposition to the legislation “by no means condones any hostility toward anyone who experiences same-sex attraction.”

In a Nov. 17 statement after the bill advanced in the Senate, Cardinal Dolan called it “a bad deal for the many courageous Americans of faith and no faith who continue to believe and uphold the truth about marriage in the public square today.”

“It is deeply concerning that the U.S. Senate has voted to proceed toward potential passage of the Respect for Marriage Act,” he said. “(It) does not strike a balance that appropriately respects our nation’s commitment to the fundamental right of religious liberty.”

In their joint letter, Cardinal Dolan and Bishop Barron said the measure’s “rejection of timeless truths about marriage is evident on its face and in its purpose.” They repeated the cardinal’s earlier point that it “would also betray our country’s commitment to the fundamental right of religious liberty.”

U.S. Conference of Catholic Bishops offered a detailed analysis of the bill

In a detailed analysis, the USCCB said the Respect for Marriage Act “will be used to argue that the government has a compelling interest in forcing religious organizations and individuals to treat same-sex civil marriages as valid.”

The amendment to the bill says it “protects all religious liberty and conscience protections available under the Constitution or federal law, including but not limited to the Religious Freedom Restoration Act, and prevents this bill from being used to diminish or repeal any such protection.”

It also “confirms that nonprofit religious organizations will not be required to provide any services, facilities, or goods for the solemnization or celebration of a marriage.”

But the USCCB analysis said that even with the amendment, “religious objectors are likelier to be denied exemptions under the First Amendment and RFRA in cases where they would have prevailed but for the passage of RMA.”

The measure “would have a ripple effect that hurts religious freedom in every context where conflicts with same-sex marriage arise, not just in the context of compliance with RMA itself,” the analysis said.

“Employment decisions, employees’ spousal benefits, eligibility for grants or contracts, accreditation, tax exemptions — it runs the full gamut, even in religious liberty conflicts arising out of state or local laws,” it added.