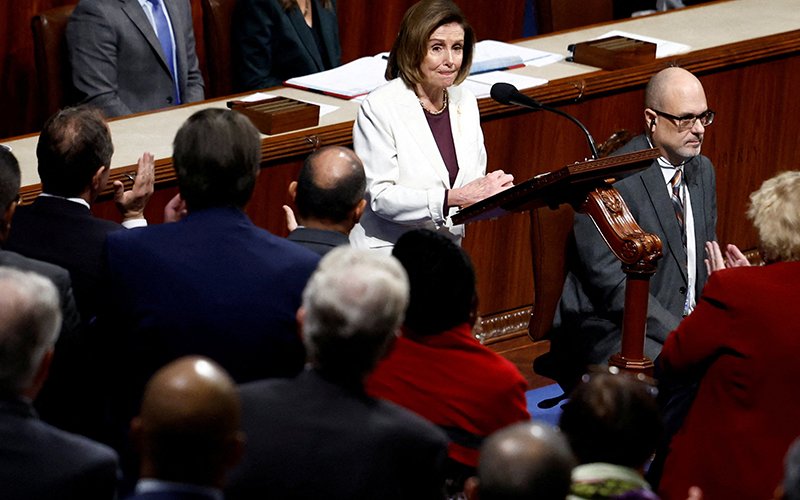 House Speaker Nancy Pelosi, D-Calif., reacts to the applause of her colleagues Nov. 17, 2022, after announcing that she will remain in Congress but will not run for reelection as Speaker. She announced her decision on the floor of the House Chamber of the U.S. Capitol in Washington after Republicans were projected to win control of the U.S. House. (CNS photo by Evelyn Hockstein/Reuters)

WASHINGTON (CNS) — House Speaker Nancy Pelosi, D-Calif., quoted from the Book of Ecclesiastes Nov. 17, saying that “Scripture teaches us that for everything, there is a season. A time for every purpose under heaven.”

She announced that this was the time for her to step away from the top leadership of her party in the legislative chamber.

“For me, the hour has come for a new generation to lead the Democratic caucus that I so deeply respect,” she said from the floor of the House. “I will not seek reelection to Democratic leadership in the new Congress.”

At the end of the year, she is set to conclude two decades as a top Democrat in the chamber and the first woman to hold the Speaker post.

“I tip my cap as I welcome @speakerpelosi to the former Speaker’s club and congratulate her on a historic career in the House,” tweeted Nov. 17 fellow Catholic and former House Speaker Paul Ryan, the Wisconsin Republican who held that spot from October 2015 to January 2019.

Trinity Washington University, the Catholic institution Pelosi graduated from in 1962 — then known as Trinity College — thanked her for her “heroic career in leadership” and tweeted that “@trinitydc beams with pride at your accomplishments, and much gratitude for your service to our nation!”

She made the announcement days after her husband was attacked in late October by a man wielding a hammer at their San Francisco home in what authorities say was an attempt to kidnap and possibly hurt the speaker, who was in Washington at the time.

Canadian David Wayne DePape, the suspect, faces federal charges of assault and attempted kidnapping in the case, as well as state charges of attempted murder, assault with a deadly weapon, burglary, elder abuse, false imprisonment and threatening a public official.

She did not mention the attack in her speech but thanked her husband, Paul, whom she said is recovering, calling him “my pillar of support.”

Ann Pauley, vice president for media relations at Trinity, commented on Twitter on Pelosi’s announcement and wardrobe, a purple shirt over a white blazer with a gold necklace and broach, perhaps a nod to the Catholic institution’s purple and gold school colors.

“@SpeakerPelosi invokes history, great leaders in Congress, St. Francis, defense of the #Constitution and #Democracy. Her iconic white suit is a salute to women. Her alma mater @TrinityDC is #TrinityProud – we love her Trinity purple!” Pauley tweeted.

Though she will not seek the leadership post, she will remain in the House representing California’s 12th Congressional District. She won reelection to her House seat in the Nov. 8 midterms.