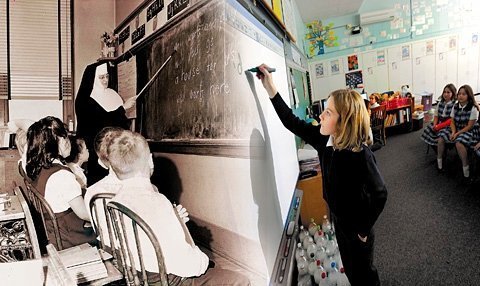 During what she termed the heyday of Catholic education in the 1950s and 1960s, "parents felt obligated to send their children to Catholic school," recalled Sister Jane Herb, IHM, Albany’s diocesan superintendent of schools.

Indeed, Anne Willkens Leach — Sister Herb’s counterpart in the Rochester Diocese — said she was educated alongside virtually all Catholic youths in her neighborhood at the former St. Cecilia School in Irondequoit five decades ago. It certainly helped that parochial-school tuition hadn’t yet been imposed. Had there been a significant price tag, Willkens Leach said, she likely would have attended public school due to her family’s rather ordinary income.

As it turned out, times were about to change — with a shift so profound that it continues to this day.

Some Catholic schools in the Diocese of Rochester began charging tuition in the 1960s. As the practice spread to more schools and tuition rates increased, enrollment figures that had peaked in the late 1950s headed steadily downward. Today, enrollment is only about 10 percent of where it stood a half-century ago.

Such sobering trends are not ours alone, Willkens Leach observed.

"It’s a huge concern across the country. It’s all over," she said, noting that at national conventions and meetings of Catholic educators, "Everybody’s talking about trying to turn things around."

And enrollment declines are particularly high in this part of the country, due to a significant population shift of Catholics to the south and west in recent decades, noted Sister Herb, who serves as president of the Department of Chief Administrators of Catholic Education (CACE), a division of the National Catholic Educational Association.

"Across the Northeast and in New York, we’re struggling with the same issues and concerns," she remarked.

Tuition levels have risen over the years as salaried teachers have almost completely replaced religious faculty. Today’s families also face a difficult economy — and with the increasing availability of charter schools, they now have a fresh option of educating their children in nontraditional public schools at no cost.

Sister Herb added that attendance trends also can be traced to lesser overall involvement in church life by Catholic families.

"The phrase I’ve used is that Catholic education has moved from an obligation to an option," she said.

Despite significant enrollment declines, Sister Herb and Willkens Leach emphasized that the quality of Catholic education has remained high, emphasizing superior academics and a strong focus on faith and values. The trick to creating a Catholic-school revival, they said, is to convince more families that the rewards of Catholic schooling outweigh parents’ sacrifice of several thousand dollars per year. For instance, Sister Herb suggested developing a "franchise model of excellence" to communicate the good news about Catholic education.

"What’s our brand, how are we known? When we see this brand, what makes this quality education?" Sister Herb said. "What can be the niche for our Catholic schools, how can we reimagine them? What are the kind of things we can do the public schools can’t? It’s not that we want to become elitist, but we want it to mean something, we want it to stand out."

According to the NCEA, Catholic-school enrollment in the United States peaked during the early 1960s at more than 5.2 million students. By 1990 that figure had shrunk by more than 50 percent. After a slight resurgence in the late 1990s, it dipped to 2.1 million (in prekindergarten through grade 12) for the 2009-10 school year.

Between 2000 and 2010, a decline of approximately 20 percent occurred in the overall number of students and school buildings, with elementary-school enrollment falling by more than 25 percent. In 2009-10, 174 schools consolidated or closed while 24 new schools opened, the NCEA noted.

Locally, a 2008 Catholic Courier story reported that enrollment in the Rochester Diocese had peaked at 55,000 students in 1959, whereas Willkens Leach said enrollment in 2010-11 totals 4,882 youths in kindergarten through eighth grade. Diocesan Catholic schools have experienced a 50-percent decline in enrollment since 1997-98, leading to the closing of numerous elementary schools — including 14 schools in 2008 alone. This past Dec. 1, diocesan officials announced that in 2011-12 Holy Rosary in Rochester and Mother of Sorrows in Greece will relocate to Holy Cross in Charlotte, which will reopen after having closed in 2008.

How did we get to this point? For starters, the NCEA points out that lay people now account for 96.3 percent of all Catholic-school faculty — a stunning evolution from 50 years ago, when Catholic schools were staffed almost exclusively by religious and clergy who did not command a salary.

"You gave them a house and food, and that was great. The move to lay teachers has been great, but with that comes a price," Sister Herb remarked. And even though Catholic-school teachers get paid far less than their counterparts in public schools, Wilkens Leach noted, tuition costs are still difficult to contain when salaries are factored in.

Beyond the payroll issue, Willkens Leach said the Rochester Diocese has struggled to maintain needed levels of community fundraising and parish financial support in order to keep up with operational costs and provide financial aid. This struggle has particularly affected urban schools. Only two diocesan elementary schools currently operate in the City of Rochester, reflecting a compromised ability to carry out a traditional mission of Catholic education — serving the underprivileged.

"I wish there was more we could do for financial assistance, but there isn’t that much to go around. It’s getting harder," Willkens Leach said.

"In my heart, I view Catholic education as one of our missions that we can’t let go of," she added, but also acknowledged that missions cost money. Thus the struggle continues between Catholic ideals of service and what makes good business sense.

Willkens Leach added that the diocesan school closings and consolidations of recent years have left her and Bishop Matthew H. Clark subject to criticism, but said any perception that they don’t both strongly back Catholic education is inaccurate.

"(Bishop Clark) is the president of our fan club," Willkens Leach said, remarking that "nobody would be happier, other than me" if enrollment were to turn upward. On the other hand, she said it’s hard to know if and when enrollment declines will level off. Yet she discounted the possibility of the diocesan Catholic-school system disappearing altogether, saying every diocese and archdiocese in the country has some sort of school system.

So how can the downward enrollment trend be reversed? Officials in dioceses and archdioceses around the country continue searching for the answer through feasibility studies, strategic planning and the development of task forces.

Sister Herb, for one, contends that "we now have to be on the cutting edge (and) market ourselves with innovative programs," citing such examples as International Baccalaureate programs and expanded online learning.

"Get families, relatives, neighbors out there," she said. "A big piece of this is, how do we sell our schools?"

It’s vital that such efforts make note of consistent academic excellence in Catholic schools, leading to higher success in high school and college, she said. Along those lines, a big asset for the Rochester Diocese is its accreditation process, which in recent years has seen most of its schools meet strict national criteria for excellence as set forth by the Middle States Association of Colleges and Schools’ Commission on Elementary Schools.

Willkens Leach said she also believes that the schools’ demographics must be expanded in order to swell enrollment.

"We need to reach out more to non-Catholics, to people of all faiths, all believers, letting them know we have values-based education in a phenomenal setting," she said.

According to the NCEA, non-Catholics make up 14.5 percent of Catholic-school enrollment nationwide.

Sister Herb agreed about reaching out to different faith traditions. However, she cautioned, "If you put too much of one ingredient in, you lose the taste of the original ingredient. We still have to remain unabashedly Catholic."

Sister Herb emphasized that Catholic faith and tradition should always be the cornerstone of what is good about Catholic education — and she offered a recent example to reinforce this belief. Reflecting on the deadly shootings outside a Tucson, Ariz., supermarket in January, she commented, "How do we help the young people for tomorrow realize that we are all made in God’s image and need to be able to agree and disagree?"

She added that while visiting an Albany school in early January, President Barack Obama requested a moment of silence for the shooting victims. Instead the principal said over the public-address system, "We can choose to pray," and proceeded to lead the school in prayer.

"That’s who we are in Catholic schools. It was a proud moment for me," Sister Herb said.