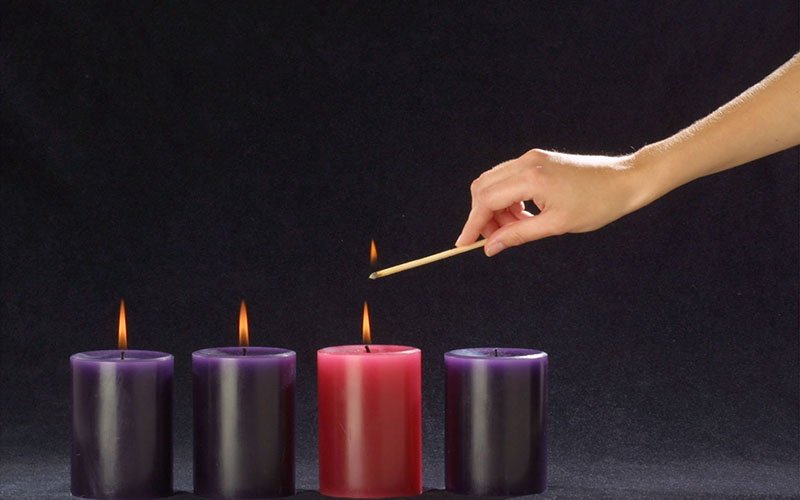 The Advent season begins Nov. 27 with the lighting of the Advent wreath as the central symbolic rite of spiritual preparation for Christmas. Purple is the color of penitence and humility, thus, three purple candles. The rose colored candle represents a hopeful look toward Christ's coming. (CNS photo by Jon L. Hendricks)

Advent is a “continuous call to hope,” says Pope Francis. It seems, then, that a key aim of this pre-Christmas season is to focus attention on hope’s immense importance for everyone.

But why? Is hope a problem? Sure, it can be. Human hopes frequently get dashed, driven underground.

Sustaining hope can mean surviving big disappointments and surmounting temptations to give up when our finest plans encounter confounding obstacles. Sometimes hope’s challenge is to start over, to pursue again (in new ways?) a goal whose pursuit only recently drained our energies.

Starting over can be hard. Are we tired? Do any embers of the hope that originally motivated us still glow?

It seems important here to say something about what “hope” means. Along with faith and charity, hope is accorded a central place in Christian life. Yet, when the topic of “hope” arises, it often remains undefined.

Not for Pope Francis, however. He wants to make its meaning concrete. In doing so he shows that he takes seriously the best of our dreams in life.

“Hope speaks to us of a thirst, an aspiration, a longing for a life of fulfillment, a desire to achieve great things, things that fill our heart and lift our spirit to lofty realities,” his 2020 encyclical on fraternity and social friendship observed.

Hope can “open us up to grand ideals that make life more beautiful and worthwhile,” he added (“Fratelli Tutti,” 55).

It makes sense to zero-in on the much-needed virtue of hope during Advent. Don’t the coming days of Christmas, so focused on Jesus’ birth, announce a new birth of hope in our world?

God is not distant

Christmas affirms emphatically that God is not distant. Instead, God is near and involved with our actual lives. This point should not be overlooked when considering the relevance of hope in Advent, Pope Francis suggests.

It is not idle chatter when he speaks of hope. He understands what wounds hope. People need “courage” when they are “under duress or suffering,” he remarked on Advent’s first Sunday in 2020. Advent is a reminder to them that “God is not distant” and “does not abandon” people.

Pope Francis made those remarks after the coronavirus pandemic took hold in the world. The pandemic posed threats to hope by generating “worry, fear and discouragement.” There was for many a risk of “falling into pessimism,” he commented.

He understands that powerful forces can darken people’s lives, wreaking havoc with the hope they need. One such force is fear.

Would it surprise you to hear that Pope Francis has spoken repeatedly of fear’s negative influence? He seems concerned that fear can gain too much control over people’s thinking and actions.

Fear has a way of paralyzing people, he suggested in his 2019 apostolic exhortation “Christ Lives,” directed above all to young people.

“Keep following your hopes and dreams,” the pope urged. He added that it is important to “avoid the paralysis of the living dead,” whereby a fear of making “mistakes” leads to forgetting that if mistakes are made “you can always get up and start over, for no one has the right to rob you of hope” (142).

Catholics hear about fear in the first reading at Masses on Advent’s third Sunday this year: “Say to the fearful of heart: Be strong, do not fear!” (Is 35:4). Rich images follow suggesting the fuller life that flows from the promises of God:

“Then the eyes of the blind shall see, and the ears of the deaf be opened; then the lame shall leap like a stag, and the mute tongue sing for joy” (35:5-6).

Naturally, not all fear is negative. Healthy fear steers us away from clear sources of harm. From the youngest age children learn not to stick their fingers into a flame for fear of the pain and damage fire can cause.

But if there is much to fear in the world, Pope Francis thinks there also is much to be gained by venturing forward with courage. Notably, he encourages people to venture forward together with others.

He cautions that fear has a way of driving people inward, prompting them to think that what is best is to go it alone. But his encyclical on fraternity and social friendship stresses that “isolation and withdrawal into one’s own interests are never the way to restore hope and bring about renewal.”

What is needed, instead, “is closeness.” The pope insisted: “Isolation, no; closeness, yes” (30).

That encyclical focused in a particular way on the larger relationships of nations or racial and ethnic groups, for example. But what he said there reflects what he says elsewhere about relationships closer to home.

Taking this route, he added, “would be so good, so soothing, so liberating and hope-filled” (87).

Tags: Advent
Copyright © 2023 Catholic News Service, Inc. All rights reserved. Linking is encouraged, but republishing or redistributing, including by framing or similar means, without the publisher's prior written permission is prohibited.